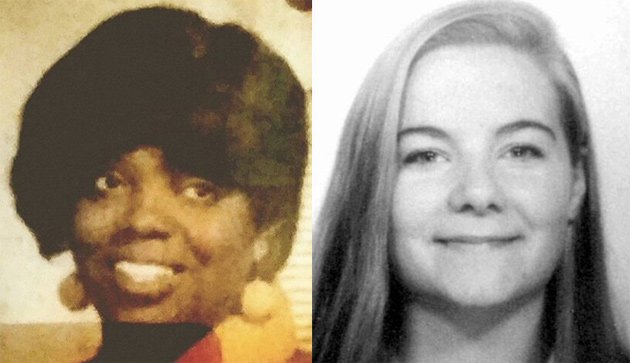 Boston Police are hoping that, despite the years, somebody out there might know something about the murders of Barbara Ann Williams, a Dorchester grandmother shot to death in her apartment in 1989 and Karina Holmer, a Swedish nanny found cut in half near Fenway Park in 1996.

Williams, 48, was crocheting in her bedroom in her first-floor apartment at 96 Standwood St. in Grove Hall on Dec. 2, 1989, when a gunfire burst through her window, killing her. At the time, the Globe reported, police figured she was an unintended target of a gang attack meant for somebody else - shots were also fired into the apartment above hers, but nobody was injured there.

Holmer, 20, from Alaryd, Sweden, was last seen alive at the corner of Boylston and Tremont streets after leaving Zanzibar, a club in the Alley, or Boylston Place.

A Swedish au pair working for a Dover couple, who let her spend weekends in the apartment/photo studio they rented in South Boston, Holmer liked going to Zanzibar with other local au pairs.

Somebody rummaging through a dumpster down Boylston Street, near Fenway Park, spotted an arm. When police arrived, they found it attached to the rest of the top half of Holmer's body. At the time, police speculated she had been strangled to death first. The lower half of her body has never been found.

Neighborhoods:
Downtown
Roxbury
Topics:
Crime
Ad:
Like the job UHub is doing? Consider a contribution. Thanks!

Makes me wish Robert Stack was still around to host Unsolved Mysteries.

I found the Unsolved Mysteries channel on PlutoTV and read up about the show.

The whole premise of the show is to take cases like these that have had little media attention, bring them to light, and have a call center for people to call. The call center was key because it connected people to investigators. (this statement about 'having a call center' was key to the shows success as said by Terry Mosgrove, one of the creators)

Apparently Unsolved Mysteries was able to help solve or reunion thousands of people over its 12 year run.

Too bad its not around today for cases like these... long forgotten cases. Strange I just saw another one earlier today from Nashua about a 1975 murder of a woman.

They are doing a Neflix

They are doing a Neflix revival of it. It has a few seasons.

Netflix rebooted Unsolved Mysteries last year. Same creepy music, no Robert Stack unfortunately. The cases are more long-form and heavy on details, but the Swedish Nanny would be a great case for the show.

Netflix revived the show and put out 12 new episodes last year, including one about UFOs in the Berkshires. Most of the episodes were pretty good, from what I remember. And they kept the original theme song!

the first season of the

the first season of the reboot was good, the second season was kinda crappy. all the cases were less of mysteries and more of "let's throw out occams razor and see what sort of mess we can make of this event"

The Swedish Nanny cut in half

Got a LOT of media attention. I remember this case very well.

Talking with friends about the Holmer case not long ago

...because after a few months and a lot of press & upheaval following her murder, it went totally quiet and none of us ever heard an update. I think every guy I knew in Fort Point was questioned, and a few were repeatedly-- artists who owned carpentry equipment and table saws. Then, nothing. A bizarre, macabre case.

...it's hard to imagine the nanny case going unsolved. The areas where she was last seen and where her partial remains were found must be flooded with surveillance cameras today. Even the Dorchester killer(s) could be found through traffic cameras, though the victim was indoors and unseen. Not sure where I come down on our incipient police state, but there are definitely some benefits.

These days it seems that even touching another person might leave behind enough DNA to search databases or comb through a family tree. Certainly strangling and cutting a body in half could have left a strand or two around?

A double murder/rape in Montana from 1956 was just solved a couple weeks ago that way.

Makes me wonder if they can find something - anything - that could be processed through databases of known offenders or used in conjunction with GEDmatch. Was this a serial killer? Were there others?

I was in the Alley that night

At the end of the night me and my friend were going in opposite directions, so I let her take the first cab and walked home (although I promised I would get in the next cab). I lived in the South End so it wasn't far. I remember taking off my boots and walking in stocking feet.

I have a (false?) memory of a snippet of video. It was the hallway between bars where the restrooms were. The Hallway was in the background not too close. But you could recognize Karin from her height, blond hair and silver pants. but everyone says there was no video. It wasn't useful video from what I remember.

I was living in the Fenway at the time...

...and my very first thought, when they found half of her body in a neighborhood dumpster, was "This was done by someone who doesn't know this neighborhood AT ALL." Every morning like clockwork the can-and-bottle collectors would be going through those dumpsters, meaning the body would be discovered fairly quickly. Also, it's unlikely it was dumped in broad daylight, so it would have happened after trash got added to the dumpster, meaning...it's right there close to the top. Not that that really narrows it down at all, and I'm guessing there were no cameras at the time, so...

Boston had a murder case even

Boston had a murder case even wierder than "The Black Dahlia" and this is the first I'm hearing of it: What the heck was I up to in the 1990s that this is nowhere in my memory? Jebus, they never found the bottom half. Ultra-creepy!

You should check out "Fall River" on Epix.

It's a very bingeable four-part true-crime documentary about a lesser known case from the late '70s. It's got three killings, a possible serial killer, satanic panic, police misconduct, conspiracy theories, and lots of twists and turns to keep things moving. Also, it's recent enough that many of principles -- suspects, witnesses, friends of the victims, investigators -- are still alive and surprisingly willing to talk on camera, on the record. It's very well done, and I think if it was on Netflix it would have made much more of an impact. Unfortunately, nobody knows what the heck Epix is, but it's easy to find and sign up for a free trial.

It turned out to be a very big ugly thing.

That was a great podcast…..