Owners of West Roxbury pizza place say they have nothing to do with the Trump flag flying from the top of the building they're in, so please stop boycotting them 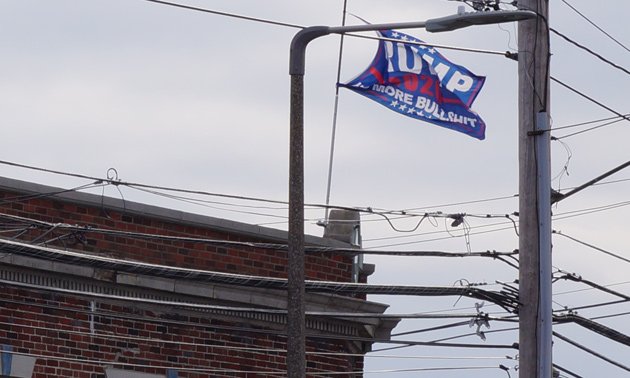 Even after the events of last week, the owner of the two-story building at Washington and Grove streets in West Roxbury remains a Trump supporter and so has kept flying a flag reading "Trump 2020: No more bullshit" from a flagpole at the top of the building.

That's become a problem for Kimberly and Luis Arcos, who own Target Pizza on the first floor: They have nothing to do with the flag, which flies in the air right above their entrance, but angry people are calling them up just to tell say they're boycotting the place and writing bad Yelp reviews, even people who obviously have never been there, such as Susan S. of San Francisco, who this week wrote her first Yelp "review":

MANY PEOPLE ARE SAYING the pizza here is not good. However, the tRump tears are fine as long as they are fresh. Seriously, one week after the seditious attack on Capitol Hill the owner of this pizzeria still has his Trump 2020 flag flying. Choose wisely.

The Arcoses bought the business in 2019 from their landlord, Francois Youhanna. Kimberly Arcos said today that neither she nor her husband took sides in the presidential election and that when they've brought up their flag problems with Youhanna, his only response was to say that if people have issues they can talk to him.

But that's hard to tell people like the guy who called Target the other day and told Luis Arcos that he'd love to buy food from Target but can't because of the flag, then hung up, Kimberly Arcos said.

Francois Youhanna needs to realize that the word much is not spelled no.

If Santarpio's hung a Trump flag, I wouldn't just stop going there / getting their pizza. I despise Trump, but simply because he's a baby and totally unhinged- he's not Hitler. This political division is over the top.

Well personally I value not

Yeah, what's with the Hitler

Yeah, what's with the Hitler comparisons? Learn some history, people, he's much more of a Mussolini.

"if people have issues they can talk to him."

So, I assume that means he's encouraging the Arcoses to give out his phone number to anybody who calls to complain? They should take him up on that offer.

If this was my biz.. it would have been gone months ago. I would have gone out on the roof myself and took it down.

Sue them for what exactly?

Steal it? It’s clearly the building owner who placed the flag there. Good way to get evicted and really destroy your business.

Right, and that says something

They aren't really recognizing the degree to which racism and other forms of bigotry affect people. Just, "well it isn't our flag so stop bothering us." So, have you put up signs in your own restaurant clearly letting potential customers know that Black lives matter to you, that you're an LGBTQ safe space, that you don't support fascism, etc.? Do you actually care that your neighbors feel unsafe because of that flag paired with your indifference to it? Or are you just focused on "please quit leaving us those Yelp reviews?"

I don't want to patronize a business owned by people who "didn't take sides" in the election. That means that bigotry and fascism isn't actually something you take issue with and feel the need to speak against.

Yelp is a joke. Also, Target

Yelp is a joke. Also, Target used to be good but they changed the recipes and it got bad. It was great food in 2016/17 living right near it.

It always seems more like a plea for decency which I fully support.

Wish I could direct upload a picture

I have a good powerpoint quickie remix of that flag, where "2020" is replaced with "LOST".

The designer should've thought this through a little better. Looks like it is advocating for "More Bullshit"

although maybe that was their intention. certainly what we are getting.

Wow, that's a tough situation. What are people supposed to do if their landlord does something like this that hurts their business?

He likes to throw things.

Target Pizza is excellent, but too $$$ for my blood. That sucks, wonder if they have legal rights if the landlord is disrupting their business.

Adam, you come thru in unexpected aways

I've been wondering if that flag is still there, but keep forgetting to look when I go by. Mystery solved -Thanks Adam.

Weird, the "I don't care if

Weird, the "I don't care if my beliefs cause your small business to fail" attitude sounds like a whole lot of bullshit.

One would think that a business owner would want the business that they rent to to succeed, no?

Especially considering the rest of the businesses in the building are constantly shutting down.

What’s made worse is the

What’s made worse is the place next to target pizza is a black owned braids salon. That trump flag feels oddly close to a hate crime

That’s not going to be good for business

That’s not going to be good for anybody.

I remember seeing that flag back in October

... and I was dumbfounded that anyone could couple support for Trump's reelection with the slogan "no more bullshit". The man's been President for four years and pretty much everything out of his mouth has been a lie. Surely "no more bullshit" = no more Trump.

Perhaps East Boston Savings Bank would be interested to know about this flag?

Since 2020 and the election are over, and the flag contains profanity, a 311 call might be in order, too.

OMG: When you're standing under a tree and an eagle comes in for a landing in that tree
Perched
Maskless Republicans with a microphone get West Roxbury restaurant hauled before licensing board
House on fire on Washington Street in West Roxbury
As apartments go up around him, owner of convenience store on VFW Parkway in West Roxbury seeks to add full liquor stock to his beer and wine
Reclining is cold comfort at Millennium Park these days