MIT was particularly magnetic this past weekend 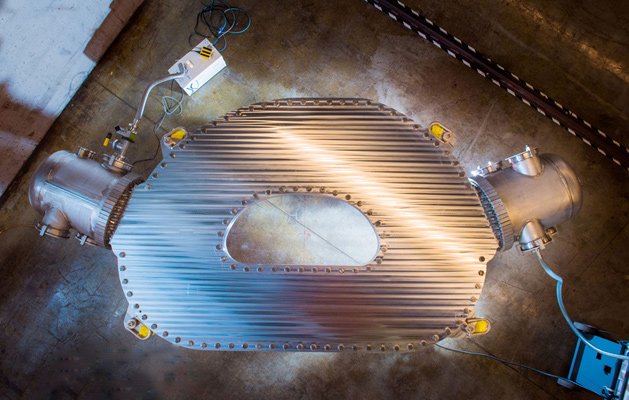 While most of us were enjoying the Labor Day weekend, researchers at MIT and a spin-off fusion company in Cambridge were powering up the world's most powerful version of a new type of superconducting magnet, one they say could help lead to fusion power actually becoming a reality.

On Sunday, researchers at MIT's Plasma Science and Fusion Center and colleagues from Commonwealth Fusion Systems turned on their "high-temperature superconducting electromagnet" in a nondescript brick building on Albany Street in Cambridge. MIT says they achieved a strength of 20 tesla, about 4,000 times stronger than the magnets that hold kid's pictures to a refrigerator - but more important, a new record for this type of magnet.

To achieve fusion - the creation of energy when two hydrogen atoms slam together to form a single helium atom - scientists have long tried to build chambers pulsing with strong magnetic fields to contain the super-hot plasma in which the atoms slam together, because the resulting temperatures, as high as 100 million degrees, would instantly melt any physical container.

Until a few years ago, this meant building copper-based magnet systems cooled to roughly 4 degrees above absolute zero - which is roughly -460 degrees F. At that temperature, copper becomes a superconductor - it can generate a much stronger magnetic field. One problem is that the stronger the field, the larger the required magnet system.

The MIT magnet, in contrast, is built around a type of tape that uses a new type of superconducting material that only needs to be cooled to roughly -420 degrees F. Still very cold, but enough of a difference that researchers can achieve the same sort of containment as earlier systems with far smaller magnet systems. According to MIT:

With the magnet technology now successfully demonstrated, the MIT-CFS collaboration is on track to build the world’s first fusion device that can create and confine a plasma that produces more energy than it consumes. That demonstration device, called SPARC, is targeted for completion in 2025.

That reactor is being built at a Commonwealth Fusion site in Devens.

My physics is a little rusty but do you need a "below" in there? :-)

Adam is missing the negative

Adam is missing the negative sign. 4 Kelvin (which is the same scale, different baseline as Celsius) is -452 degrees F. It's cold. Really, really cold. It also usually requires the use of a lot of liquid helium, which is a finite resource, growing increasingly scarce and increasingly expensive to purchase.

One day MIT is going to open up a wormhole...

To another dimension. :o

Are only 20 years away. Just as they have been for the past 50 years.

If you want to sue after your kid gets screwed by a public school, you have to notify the mayor first, not the superintendent, court rules
Red Line riders don't have a prayer when a train dies at Kendall Square
Pfizer, Covid-19 vaccine partner sue maker of failed vaccine to keep it from claiming they stole from its patents
Red Line riders lose any glee due to dead train at Kendall/MIT
Smoots Forever
Uber driver with two passengers slams into Porter Square bank