Mass. General going forward with large post-Covid expansion that would include room for possible Red and Blue Line connector station 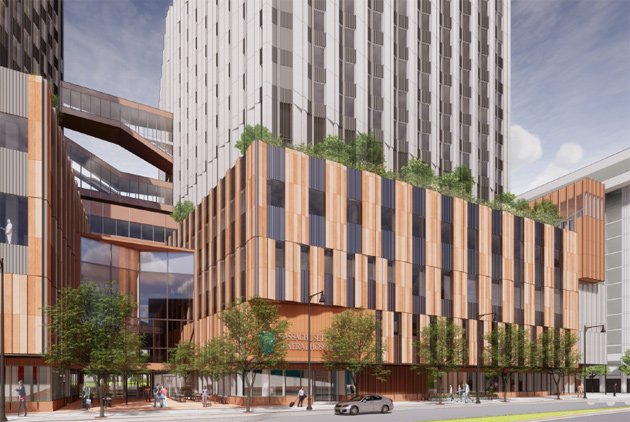 The view from across Cambridge Street, by NBBJ.

Massachusetts General Hospital yesterday filed its latest plans for replacing several current buildings and a parking lot with a new two-wing building with 1 million square feet of new clinical space and patient rooms that could be more easily converted into ICU use in another pandemic - and which would include space for a headhouse, or entrance, for a possible Red/Blue Line station.

The building, along Cambridge Street at Blossom Street, would also be designed as a sort of potential fortress in which MGH clinicians and other staffers could continue to work and shelter for up to 96 hours should Boston ever by hit by a major natural disaster or enemy or terrorist attack.

A five-story "podium" housing various clinical services and operating rooms would be topped by two nine-story towers housing in-patient beds. Underground would be a new six-level parking garage, along with space set aside for elevators and stairs to the expanded Charles/MGH, should the Blue Line ever actually be extended down Cambridge Street.

When completed, the new building would have 482 beds - which would mean a total increase of 94 new beds over the hospital's current 1,043. However, the work would also mean the end of many of Mass. General's double rooms, which the hospital's says can cause issues in terms of matching patients based on their age, gender and, especially now, their infectious status.

The Project will help to address future needs for highly serviced, flexible facilities to manage surge capacity. Spaces need to be built to be easily converted. At the beginning of the COVID-19 pandemic, half of the patients were in ICUs, and 90 percent of those patients were on ventilators. MGH has cared for more COVID-19 patients than any hospital in the state, in part due to its ability to mobilize during periods of disaster and its ability and expertise in caring for critically ill patients. However, many of the current ICUs were not originally designed as ICUs or easily convertible to ICUs due to the difficulty in housing all the necessary equipment. MGH has not been able to fully utilize all of its beds for the treatment of COVID-19 patients. In the event of a future pandemic, MGH must have the inpatient capacity necessary to care for patients and allow for timely admission from the Emergency Department to the appropriate care setting. The Project will afford MGH operational agility in responding efficiently to similar future situations.

The hospital adds that waiting areas, for example, for patients about to go into or just leaving surgery, will be designed so that they can quickly be converted into places to house additional patients in the event of an epidemic surge or other catastrophe.

The hospital says the new space will let it re-organize many of its clinical services into "centers of excellence," which will let patients get all their care in one place, rather than having to travel between several buildings on the hospital campus. As an example:

Currently, cardiovascular and cancer services are scattered throughout the Main Campus, leading to disjointed, less efficient care and staffing patterns.

Mass. General says the new building will also include improvements for people walking around outside as well.

The building will step back from Cambridge and North Grove streets, providing a tree-lined public space - a well-lit and furnished plaza with moveable seating thatwill serve both the public and the MGH community. The Cambridge Street frontage will be activated by commercial spaces, likely to be occupied by food and beverage establishments, which will contribute to the evolving vibrancy of the street and will be fully accessible to the public during commercial business hours. The main entrance to the building will be midway along this façade. An exterior forecourt at the entrance will offer an 'outdoor room' with movable seating under a canopy of trees. The entrance itself takes the form of a high-ceilinged welcoming arcade that extends through to Parkman Street – capitalizing on its prominent location on Cambridge Street, this entrance will become the new main pedestrian entrance to the hospital. This 45-foot high arcade will provide views through to the interior of the Main Campus and the Bulfinch Green, contributing to clear interior and exterior wayfinding for visitors.

The hospital says that the space set aside for the expanded Charles/MGH station will be used for retail or other purposes until the day the T actually does extend the Blue Line to connect with the Red Line. MGH says it's not expecting this to happen until some time after 2028, if it does, however. The T has planned such a connection in the past, only to shelve the idea before beginning to think about it again.

New T entrance on the left:

The hospital hopes to begin seven years of construction in mid-2022. The work would be done in phases to minimize disruption to existing hospital operations.

A more complete view from across Cambridge street, if the buildings on the other side of Cambridge weren't there:

Courtyard on the other side of the building:

this construction might cause a bit of traffic congestion in that area.

I honestly don't think traffic in that area could possibly get worse.

My sister lived on Emerson Place for years and every time I'd drive there I wished I had just walked.

Hasn't some of the previous concern about the Blue/Red connector

been about disrupting traffic and hospital operations during construction? Seems like this construction period would be the perfect time to build it, if it's ever going to happen at all.

MGH has supported the Red/Blue connector for years

especially after they built a satellite clinic on top of Revere Beach station.

A worthwhile project in many ways. Too bad it’s so ugly and so high.

It's so incongruous with all the other 15- and 20-story buildings on the north side of Cambridge St., especially the hotel directly across Blossom St.

This is a good thing

As a clinician and a city resident with family members who use a lot of specialist care, I'm happy to see new patient care facilities in the city. The trend has been to bring research and experimental facilities to the city and move patient care to the suburbs. A couple of the hospitals have moved entire departments completely out of the city. They then call city residents and excitedly tell us that now we don't have to pay for parking AND we get to choose whether Lexington, Waltham, Braintree, Revere, Danvers, Salem, whatever is the most convenient for us! Except we can walk to Longwood/Tufts/BMC and easily take the train or bike to MGH, so this isn't actually convenient for us or most people in the city. There are a few pediatric specialties that are now completely unavailable in the city, and many of the families I work with just no longer receive these.

MGH is one of the greatest institutions in the world

and the largest private employer in Massachusetts. Do it right, but don't stand in the way of keeping this institution moving forward.

In most counties in the USA,

In most counties in the USA, the hospital is the largest employer, with the largest tallest building. Hospitals have so much money.

In other West End news