Hole in the middle of Nubian Square could be filled by a food hall, life-sciences lab space, artist studios and condos and a cultural hall 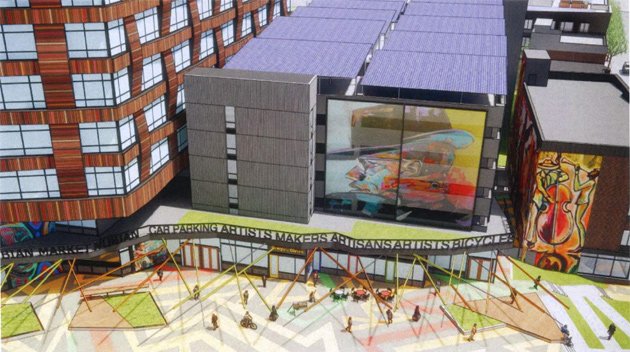 Two developers and the owner of an existing Nubian Square business this week filed detailed plans with the BPDA for a complex on what is now a parking lot and vacant land along Washington Street between Palmer and Eustis streets for what they say help revive Nubian Square as a cultural and dining destination and begin turning it into a new life-sciences center, in buildings designed to harken back to the Nubian societies along the Nile.

Nubian Ascend would sit largely on the Blair parking lot - named for the Blair Foodland supermarket for which it was built, but which closed decades ago. Local developer Richard Taylor, London-based real-estate investor Mario San Jacinto and Black Market owners Kai and Chris Grant won BPDA approval in December to redevelop the 2.4 acres of land, which the BPDA has owned since 1985.

Nubian Ascends would consist of several buildings, the largest of which, at 7 stories, would include a food hall and artist marketplace on the first floor, topped with five floors that the developers say will be built out for life-sciences research and training and medical offices.

Also included in the complex would be a nearly 20,000-square-foot hall for performances, conferences and the like, a total of 15 condos aimed at artists - with ten sold as affordable - a 6,644-square-foot "artists lab" for the artists to collaborate in, a public "artist way" path in which the artists could display their work, and a 300-space parking garage. The garage would serve both the complex and Nubian Square in general.

Nubian Ascends says that, when complete, the complex would generate some 900 new jobs for Nubian Square. It hopes to begin construction by late spring of next year.

In its filing, Nubian Ascends says the Artists Way will prove an instant, Instagrammable attraction:

This active dining and shopping corridor will be a new place to discover without cars, inspired by pedestrian passages all over the world. The easy connection between Ruggles Street towards Orchard Gardens allows people to safely enjoy the ethnic restaurants and artisan retailers whose wares can spill out from their stores. With painted paving, floating lighting, mural screening on the garage, and platforms for street musicians, the Artist Way is envisioned to draw people to this special, one-of-a-kind "Instagram-able" place during the day and into the evening.

These designs are intentionally more artistic than traditional (neo-classical) storefront buildings - they proposal a contemporary architectural language that can propel the Square into the future as an Arts & Culture District. They seek to call forth the exuberance and pride of the enduring history of Nubian patterns of buildings, baskets and textiles, with their angular and organic forms, vivacious colors, and joyful self-confidence. Nubian energy and power is the lawyer of identity that Nubian Ascends is adding to the Square, as if to say, "We are here, we are proud, we want to celebrate our heritage and culture, and we want to continue to thrive and evolve."

The filing continues that Nubian concepts played a key role in the design of the Culinary Marketplace and Cultural Hall:

The 7-story Culinary Marketplace and Lab Training/Medical/Office Building becomes a bookend to the Bolling Building to frame the new Nubian Square, and it is seen from long distances down Ruggles Street and Washington Street. The flowing, woven terra cotta facade is inspired by Nubian rugs, bringing an effervescent contemporary image to the project. The goal is for the building to translate out to the world the incredible foods and experiences that can be enjoyed in the Marketplace, and the dynamism of the community life that will occur within and around the building. Its horizontal and vertical ribbons references the patterning of historic masonry buildings across Washington Street, but are taken to the next degree of liveliness. ..

The design of the Cultural Hall is mindful of the historical and social context of the neighborhood by embracing Nubian architectural elements - triangular geometry that is symbolic of the Pyramids and other representative architecture of modern-day Sudan, Eritrea and Egypt. The symbolic triangular canopy floats above the Culture Hall, announcing the civic importance of this building to Nubian Square and the city in general.

Landed so hard all the pick up sticks fell out.

Person shot in the back on Dale Street in Roxbury
Woman charged with punching elderly man in a wheelchair in the head and robbing him in Nubian Square
Mothers walk for peace again
Citizen complaint of the day: Police can't collar loose goose
Roxbury man charged with lunchtime shooting outside Randolph Wendy's
15-year-old charged with shooting at Ruggles T station last month