East Boston could get a new flatiron building 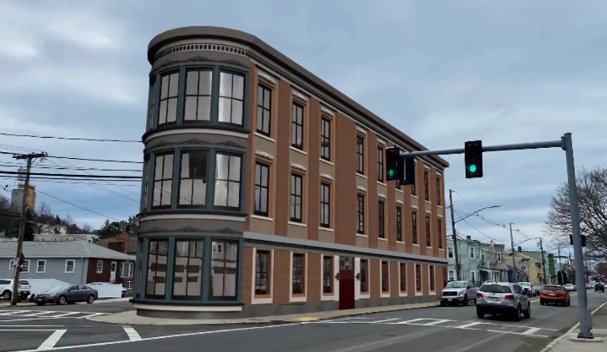 The Zoning Board of Appeal today approved a three-story, seven-unit triangular building at the intersection where Ashley Street slides into Boardman Street on the way towards McClellan Highway.

Volnay Capital's proposed brick-clad "flatiron-style" building, with seven spaces in an underground garage, would replace what is now a one-story concrete building used for freight handling.

Volnay's attorney, Richard Lynds of East Boston, said the company and its architect came up with the unusual design because of the narrow and triangular shape of the parcel. The company looked at more traditional townhouses, but concluded those just wouldn't work on the narrow lot.

Board members praised the design.

"It's a handsome looking building," board Chairwoman Christine Araujo said. Board member Eric Robinson agreed, although he added that he hopes the BPDA will work with Volnay on its "urban context" in terms of its relation to the streets and surrounding homes. Lynds said the city is currently studying "traffic calming" for the intersection and that Volnay would be willing to contribute landscaping to help make the intersection safer.

Board member Mark Erlich also liked the look, although, referring to the houses on the other side of Ashley, he wondered if it was something of "a massive Queen Mary in the presence of a lot of little pleasure boats."

Lynds agreed the homes on Ashley are shorter than the proposed building, but noted it would be across the street from a five-story hotel and a park.

The project was opposed by the mayor's office, which cited density, parking issues and the fact the plans called for roof decks. City Councilors Annissa Essaibi George and Michael Flaherty joined in the opposition.

The board voted 5-0 for the plan. Members Kosta Ligris and Joe Ruggiero recused themselves because of dealings with Volnay, a South Boston developer that been active in East Boston.

every new building in the city (and really the US) doesn’t have to be same cookie cutter trash. This would be a really nice addition to the area.

But shouldn't any new

But shouldn't any new residential building have 50-foot setbacks and 3 parking spaces per 3000-square-foot unit, causing any narrow triangular parcel to perpetually remain a vacant lot?

I had no idea they made building like this anymore.