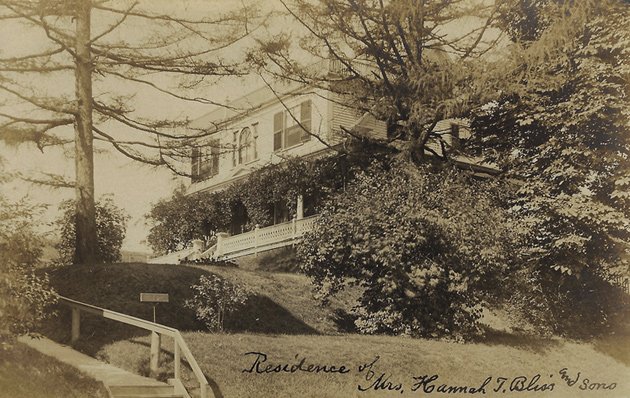 The City of Boston Archaeology Program has compiled a history of the 25-foot-deep 19th-century well that suddenly opened up last month in Dorchester's Ronan Park: It provided water for the Pierce family, whose estate sat on the land that was later turned into the park.

The granite slabs and the cobblestone shaft under the fill is almost definitely indicative of a well. Other alternative identifications include a cistern (underground water collection basin) and privy (outhouse), but neither are likely. Cisterns tend to be larger and better lined in order to retain water. They also usually have drains that lead into them from elsewhere. No drains were observed in the shaft.

Privies are usually better lined and are typically, in Boston, rectangular or square. They also tend to be filled in and are not often 2 meters deep from top to bottom- typically they are 6 feet (1.8) deep.

City Archaeologist Joseph Bagley and volunteer Amy Ohman also compiled the more human side of the story, which began in 1818, when bricklayer John Pierce "purchased 10 acres on the southeast slope of Mt. Ida along Adams Street and built a large brick home for he and his wife, Catherine B. Pierce and their family," before building a second house, next to where the whole appeared. The family story proceeded through the decades to include the saga of a seafaring Pierce who also navigated the Amazon, mysterious intrigues - why did one listed owner and her two children wind up in a boarding house near Fields Corner even as other members of the family became prosperous? - before ending in 1912, when the city bought the property and a neighboring estate to create Ronan Park.

The report notes that beyond an old metal pipe - an apparent electrical conduit - and parts of the well itself, only one artifact was found, a liquor bottle. But the bottle was plastic, so the report concludes it was likely tossed or tumbled down the hole sometime after it opened up last month.

Thanks for the follow-up

Amazing how many such surprises lurk just under the surface of our long-occupied lands. We learn in school how ancient and abandoned cities are excavated after sometimes millenia of continuous occupation and are revealed in layers that speak to years of destruction and renewal, but rarely consider how that applies to the lands we live on and travel.

Yes and in 4000 years when the water finally recedes, they will find the "lost city of Bostonia" that was flooded in the year 2030 AD and was lost.

Under the layer of sludge, archaeologists will find all sorts of things like

and these brittle soft cup like things that say "Dunkin Donuts" on it. THEY FIND MILLIONS OF THEM everywhere they dig. This has Archaeologists screaming... what was it used for, and why were there so many. Why does it say "boston runs on Dunkin", was this some old form of energy?

Nip bottles! Won't somebody PLEASE think of the nip bottles?

The Big Dig was amazing for that sort of stuff

And, in fact, Bagley's office, in remotest West Roxbury, has cabinet after cabinet of artifacts from that dig.

Thanks for the "whole" story.

Thanks for the "whole" story.

There is a house or two on

There is a house or two on Norfolk Street in Mattapan that look almost exactly like that. I wonder if they were the Clark family's as in the Clark Family Farm also on Norfolk Street. Also what exactly did they grow way back then? I think it would be a great story for UHub.

If zoning ~100+ years ago was like zoning today, a good portion of Boston would still look like that. Most of the 1-3 family homes people fight to keep today had replaced "country" plots like this one. And those estates had replaced farmland.

That farmland replaced either other farmland or woodlands or villages belonging to first peoples.

The ridiculous thing is the 3

The ridiculous thing is the 3 family homes wouldn't be allowed to be built today. Parking requirements, setbacks, minimum lot sizes per dwelling unit, floor area ratio limits, and all that means nothing gets built without a huge expensive fight, which only luxury condo developers can afford.

BPDA charges developers sold 'affordable' Dorchester condos at market rates, sues over the profits
Man arrested in Dorchester after gunfire near Roslindale elementary school
On the Red Line, problems fester; there's no service in Dorchester
E-mails show bureaucratic inertia, finger pointing might be to blame for missing steps man fell through at JFK/UMass
Fire erupts in house on Hannon Street in Dorchester
Braintree riders might want to pass; there's a dead train at JFK/UMass