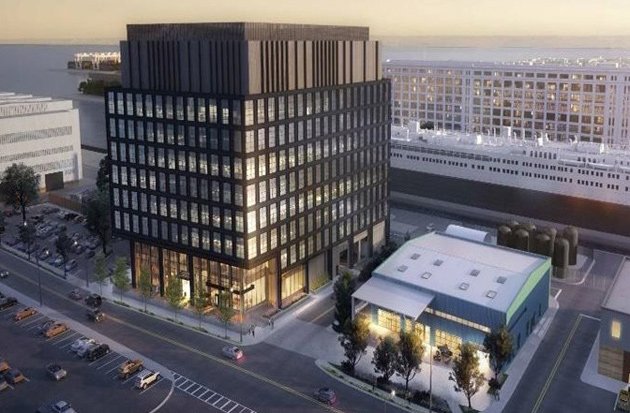 A smaller, neighboring building will be renovated to serve as an "amenity space" for tenants of the new building.

Marcus emphasized what it says it's doing to help keep the Flynn park primarily focused on marine-industrial uses: Its construction and buildings won't interfere one bit with "access to the neighboring Boston Ship Repair Dry Dock Number 3 facility" and the lots it will use hadn't been used by marine-related businesses before, so it's not making it any harder for such companies to stay in the park.

And yet, at the same time, the new lab space "will serve to expand the City’s innovation ecosystem" within the Flynn area, the developer says.

The new building will be fronted by a large "porch" area that will include a "fire table" that will "help activate the porch in the winter, shoulder seasons, and cool summer nights."

The project will include 96 parking spaces, using the current buildings' existing parking areas.

Because the land sits atop a filled tidal area right on the coast, Marcus says it will raise the grade below the new building by four feet to account for future sea-level rise. Critical building equipment will then be installed at least one foot above that new level. It adds it will also contribute to a new BPDA Climate Resiliency Infrastructure Fund aimed at protecting the Flynn park from rising tides.

Marcus hopes to begin roughly two years of construction work either late this year or early in 2022.

we call them all "deveoopers" from now on

That'll show me to write a headline then not even look at it before I go out.

The Building Is Dutch

Then it's pronounced "ope"

That's absurd. This building will be easily accessible by gondola.