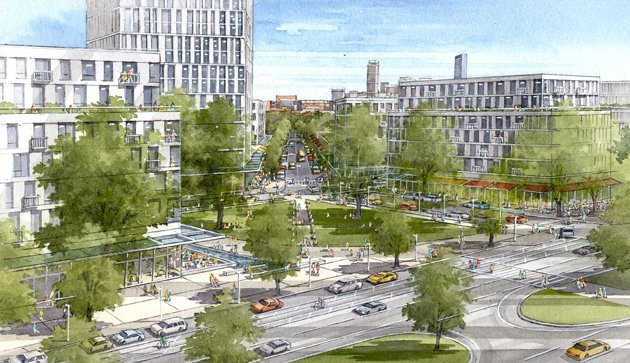 WinnCompanies today told the BPDA it will shortly file plans to begin turning the Mary Ellen McCormack development - the state's first public-housing project, opened some 83 years ago - into a mixed-income complex that will include all new homes for current BHA tenants and market-rate units.

The letter of intent is for the first, $1-billion phase of the development's overall reconstruction, covering some 18 of the current 31 acres and including 572 "deeply subsidized" units for current tenants and 600 market-rate units. The plans call for another 200 "affordable" units if funding becomes available.

The subsidized units will be spread among all the eight new buildings planned for the first phase. One building, along Logan Way and Kemp Street, will rise 19 stories; the rest will be between 5 and 9 stories.

Ultimately, the entire complex will be rebuilt, at a total cost of some $2.3 billion.

Winn is also proposing to turn the current boiler building into a "Community of Opportunity Center" that will function as a sort of community center, but also with programs focused on "employment, economic mobility, housing stability, and community engagement" - subject to finding funding for it.

The city has already committed $50 million towards the project, the latest in a series of BHA public-housing redevelopments that use creation of market-rate units to help pay for new low-income units in an era when the federal government no longer pays for such apartments. Winn adds:

The Master Plan includes re-connecting roadways into and out of the Site, helping to end the decades-long isolation of the MEM community and transform it into a socially and economically integrated redevelopment. Furthermore, the market-rate units’ revenues will reduce public subsidy needed to replace the homes of the existing 1,016 low-income families with new modern, safe, high-quality homes.

The Master Plan concept was developed in close partnership with elected resident representatives from the Mary Ellen McCormack Task Force, area non-profit service providers, community leaders, the Boston Housing Authority (BHA) and elected officials. This long-term and transparent partnership will continue throughout the permitting, development, and foreseeable operations of the community through project completion.

Just for the helluhvit I

Just for the helluhvit I clicked the free tagging: Mary Ellen McCormack Development and was disappointed. I just hope residents like these guys get evicted quickly and don't get "new housing" .

I wish when they did these rehabs they'd find a way to increase the # of public housing units.

Why should we have the same # of public housing units in 2030 as we did in 1980 when our population will have been 200,000 people fewer and homelessness is more rampant than ever? Not to mention there are so many more households not just people.

It turns out that warehousing poor people in the projects isn't a good solution to poverty. Subsidized market rate housing (i.e. Section 8 vouchers) allows access to better quality housing and doesn't tend to concentrate poor people in one place.

Chronic homelessness is more generally tied to problems like mental illness or drug/alcohol abuse rather than poverty or loss of income.

Are they planning on running a loop up Dorchester Street to connect with the one from South Station down Summer Street? The alternative will be double decker cars on the Red Line.

Man faces his first federal bank-robbery charge in 20 years
Don't have a cow, but Beacon Hill steak place is opening second Boston outlet in Fort Point, where Bastille was back in the day
Gunfire leads to two arrests in South Boston
Missing your mandolin?
A hazy start to the day due to wildfires in western Canada and US
Citizen complaint of the day: People who went up to New Hampshire didn't all blow their wads on July 4