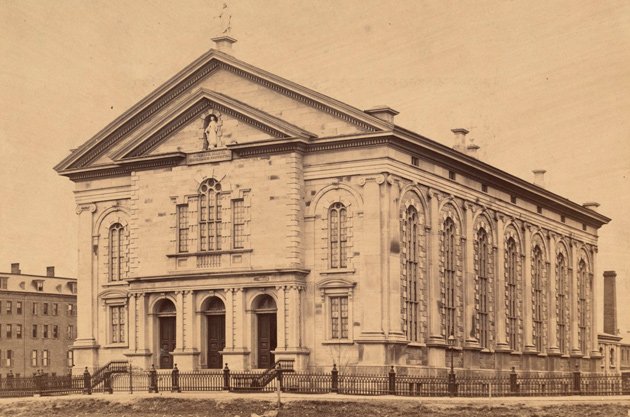 The church sometime before 1900. From the BPL.

For the second time in a week, a developer is signalling the reluctance of lenders to put money into condo projects has ended: This time with a proposal to sell 63 units at the former Immaculate Conception Church at 771 Harrison Ave. in the South End as condos, rather than renting most of them as apartments.

The reconstruction of the church and an adjoining building into residences has been underway since 2017. When developer Ronald Simons first proposed the project in 2016, he said he planned to sell all the units as condos, but in 2019, he won BPDA approval to change that to 51 rental units and 12 condos.

Six of the units will be sold as affordable.

Some 45 spaces in an adjoining garage will be reserved for resident parking.

The church was originally constructed in 1859 for Boston College, based on plans by Patrick Keely, who also designed Holy Cross Cathedral. The buildings were most recently occupied by the Jesuit Urban Center.

Last week, a developer asked the BPDA for permission to change 148 planned apartments to condos in a building under construction on Lagrange Street in Chinatown. Last year, as the pandemic crashed into Boston, developers had said lenders were reluctant to put money into new condo projects.

The real money is in long

The real money is in long term rentals.

Citizen complaint of the day: A bad parking job that merits a windshield sign in the South End
Investment firms figure out how to profit on apartments owned by non-profits; some South End residents at risk
Methadone Mile murder suspect has long criminal history - and had a young son who died in an accidental shooting
Taunton man charged with Methadone Mile murder in February
Bay Windows and South End News up for sale
Two charged for January stabbing murder outside Southampton Street shelter; one arrested with heroin outside the shelter this morning, police say