Developer says it will put up Stuart Street building that John Hancock won approval for, then went, oops, never mind 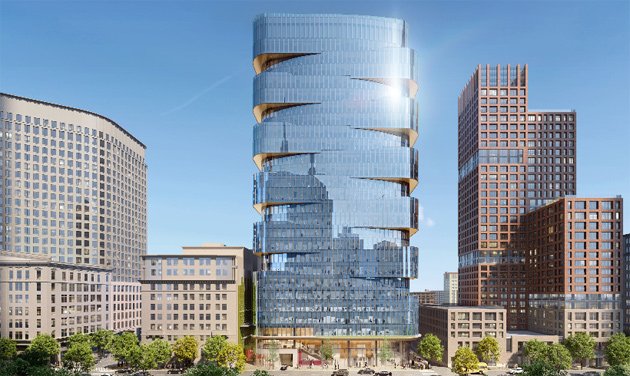 The building's so bright you gotta wear shades. Rendering by CBT Architects.

Skanska USA Commercial Development Inc. this week filed plans with the BPDA to actually put up the 26-story tower at 380 Stuart St., across from the original and now Old Hancock Tower, that John Hancock won approval to build in 2015 and then didn't.

Skanska bought 380 Stuart from the insurance company for $177 million in December and told the BPDA it wants to basically put up the same glass building, modified for this post-pandemic world we're now in, but not modified enough, the company says, to require the sort of major, time-consuming review process the BPDA might otherwise require for an all new building to replace the two shorter buildings that now sit there.

Skanska’s primary proposed changes are improvements driven by the prioritization of occupant wellness with access to outdoor space in a post-COVID-19 world. Additional proposed changes are intended to increase the public realm porosity, generate activation at the ground level, and create a more sustainable building.

Skanska says the building will still have the roughly 625,000 square feet of office and retail/restaurant space and a fitness center that John Hancock proposed back in the day, along with the four-level, 175-space underground garage that was in the plans approved by the BPDA in 2015 - along with the "planned development agreement" the two sides agreed to, letting them toss the site's zoning and negotiate on the specific project.

The revised form emphasizes the importance of creating an office building which looks beyond its immediate enclosure and begins to engage its neighborhood as well as the greater context of the city with the users of the building and highlighting the importance of a physical connection.The resulting building, with the cascading outdoor terraces, is an elegant contribution to the skyline that does not seek to overwhelm its neighboring context. The newly designed roof outline tapers and rolls as a counterpoint to the hard horizontal roof lines of its neighbors. The thoughtful undulation dips its hat to the treasured Boston Common and Boston Public Garden as the low point of the roof outline orients itself towards those city amenities

As the building dips its hat to the treasured nearby parks, it will cast no shadow on them, Skanska says.

One change: The ground floor will now feature a giant, continuous glass wall that Skanska says will blur the distinction between interior and exterior rather than being foreboding and unwelcoming:

The expanse of the glass wall from east to west occupies nearly the breadth of the Site with the exception of where the wall inflects to reveal the through-block connections and pedestrian zones on both the east and west sides. The main entry will be clearly defined by a framed portal that is capped by an extended canopy which leads pedestrians to the entry and beyond. The canopy will also help mitigate pedestrian level wind impacts and create a sheltered zone along the west side. There is a clearly defined single lane parking entry neatly integrated into the overall reading of the expansive façade. The use of light and transparent glass on the façade will blend the boundaries between the indoor and outdoor environments and invite pedestrians into the building lobby rather than the more traditional office building approach of treating the lobby wall as a security barrier.

Neighborhoods:
Back Bay
Topics:
Development
Free tagging:
Stuart Street
Ad:
Like the job UHub is doing? Consider a contribution. Thanks!

How does a pile of misaligned

How does a pile of misaligned glass discs tip its hat to nearby parks? What does that even mean?

This building doesn't "engage its neighborhood as well as the greater context of the city with the users of the building". All it engages is the wallets and egos of the few super-rich people getting richer off it.

Does anyone really fall for this marketing nonsense?

"You gotta wear shades" isn't just a clever saying. Sunlight reflecting off shiny buildings is a nuisance and hazard for pedestrians, people in neighboring buildings, and drivers. Are there any zoning rules to limit this problem?

The sunglasses crack was me, not Skanska, after I saw that bright laser beamy glare at the top and thought you'd need sunglasses if that were an accurate rendering.

Those of us getting up in years knew the reference and chuckled.

It's a goddamn camshaft.

The misaligned disc may look like a random novelty, but have you noticed that the configuration creates an enormous amount of terrace space without reducing the volume or increasing the footprint? I think that's pretty clever.

Do I see cracks in that glass

Do I see cracks in that glass?

Sorry. I like the building, but use of this term disqualifies any project from being built.

A striking design, but with all that glass, they can attain the kind of environmental standards any new building should achieve?

If they're trying for LEED

If they're trying for LEED certification, they'll get it with cheap but useless features like hybrid-only parking spaces in the massive underground garage.

The drama of the Nasher Sculpture Museum is notable where building glare is concerned. At least this building can not focus a heat ray on the MFA. However, what prevents glass buildings from acting like magnifying glasses focused to create a heat ray on pedestrians, as some of us practiced the magic of heat rays on ants?

On the other antenna are not most of us just ants that serve the Queen Ants of business and politics and religion? They command and the worker ants, ah citizens, just do what we're told.

I don't see any concave stretches, which is what would be required to form a focusing mirror.

Looks like all the surfaces are linear vertically, and convex horizontally. To magnify the reflected sunlight, you'd need a concave, or at least flat surface. You'll still get glare off those linear verticals, but it won't be concentrated.

This ridiculous asymmetrical trend has got to stop. And people thought brutalist was bad. I'll take it any day over this sloppy looking thing.

I have to agree with that statement.

That's gotta be the shiniest camshaft that I've ever seen!

2015 was a long time ago. Where’s the affordable housing?

Fancy prose and building flipping as with Fenway’s The Harlow (Skanska) does not a liveable city make.

but do they have plans

.. for bird carcass collection and removal?

I don't get the aesthetics. Extra money for slightly less building that results in edge rooms that don't come to corners.

I also don't get the use -- aren't folks worried about a bunch of empty class A/B/C office space in the coming years?

But I sure don't mind it. I want Boston to grow, in both commercial and residential space. I want to see a more urban Massachusetts, and this fits that vision.

I like it. You can tell it's great by how mad it seems to make everyone.

glad they let us know that it wouldn't cast a shadow on the park in Copley or the common, neither of which i think you could see from this building thanks to the new hancock and the old hancock blocking the line of sight.

which is where the cash is probably coming from.

Any word about solar or other energy mitigation strategies? green roofs? anything besides another flat expanse of black asphalt on the roof to absorb heat and make the urban heat even worse?

I don't understand why the city will go after these people for all kinds of concessions but not force their hand for things that are demonstratively proven to help problems that affect the WHOLE CITY. oh wait I totally do.

Anything is an upgrade over the old building

this design looks pretty nice. I worked at JH in the old 380 Stuart st building, everything about it was pretty bad.