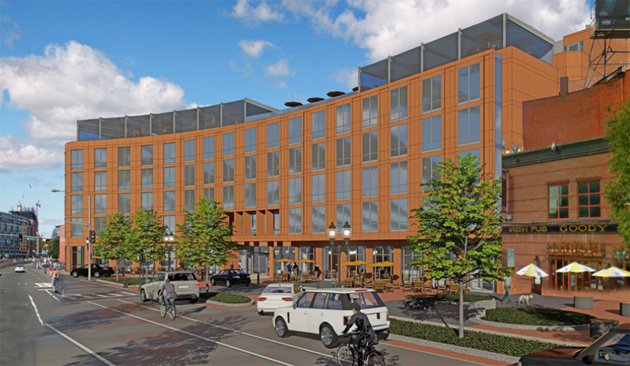 Rendering by the Architectural Team.

William Caulder's 6M Development of the North End today filed plans for a five-story, 134-room boutique hotel with two restaurants along Cross Street, next to where Goody Glover's used to be before it was replaced by a Chase Bank branch.

The proposed hotel would replace a parking lot and two one-story buildings, one now vacant, along Cross Street and also bordering Endicott and Morton streets. An open-air cut-through in the middle of the building would let pedestrians walk from Cross Street to Morton Street and Cutillo Park.

The roof would have a deck for outdoor dining for up to 300; the two restaurants would have a total of 240 indoor seats.

This being the North End, the total parcel, less than a third of an acre, is currently divided into 11 separate lots; 6M says it has the rights to all of the lots.

From the filing, the current buildings:

The proposed hotel would have no on-site parking, but 6M says it has an agreement for valet parking at the nearby Haymarket Garage. It would have space for 20 bicycles - 16 for employees to bike to and from work and the other 4 for bikes for guests.

In addition to the BPDA, the Zoning Board of Appeal will also have to give its OK.

Boring and not affordable

Boring and not affordable

Has anyone ever noticed that greenway is very

Doesn’t even have a

Doesn’t even have a traditional look to it , it doesn’t mix in with the surrounding structures, it looks like it belongs at one of those industrial parks on route 128.

Return of the bricks. Very

Return of the bricks. Very Boston.

Don't care much about this

Don't care much about this bland, probably expensive proposed hotel, but seeing that photo of the empty buildings on Cross St. makes me sad. It wasn't even that long ago that strip was packed with small businesses... was it? All gone. Maria's was the last one I think. I guess we'll replace them with condensed mega-lots with interior spaces 5-10 times the size of what was there before, way too big for any small business to afford or use.

...is a GREAT idea. Cutillo Park and Morton Street have been a dumping ground for decades despite several efforts to clean up and revitalize. This would make a huge difference.

This has me really missing Maria's pastries.

That’s some bland stuff right there

Hardly enough for a hotel that size.

Whe I bike to a hotel, I like to keep my bike in the room.

The idea is that the hotel would have four bicycles that it could lend out to guests who want to ride around Boston. It's not a new idea.

For a traffic sewer.

Old North Church re-opens to visitors on Saturday
Bostonians really did tar and feather people
Two North End restaurants get OK to expand
Boston parks head takes new job that focuses on just one park
Citizen complaint of the day: No room for jaywalkers on Hanover Street
Not so fast with expanded outdoor dining in the North End; neighborhood restaurants have to wait until April 1