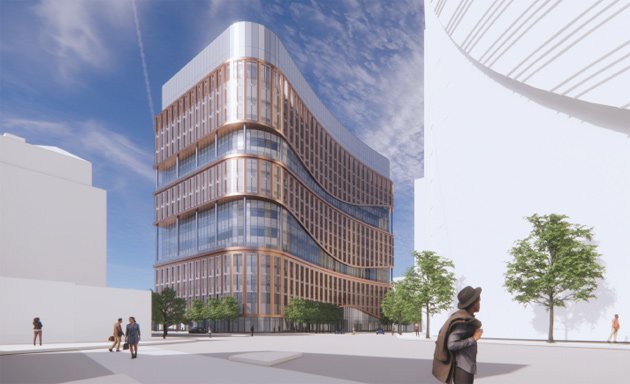 Hipster wonders when all the other buildings got bleached, in this rendering by CBT Architects.

In a filing with the BPDA, the HYM Investment Group - which is also busy planning the massive Suffolk Downs development - says it now wants to build a single, 15-story life-sciences building where had once planned three other buildings with more traditional uses across Congress Street from the section of the Bulfinch Crossing project where it's already building two 40+ story buildings - one a residential tower that is now complete, the other the future home of State Street Bank, slated for completion in 2023.

The new building would have roughly the same square footage as the three buildings originally approved by the BPDA several years ago. Another building, also part of the original filing, is still planned to go up.

The new building would sit on a nearly 5-acre parcel bounded by New Chardon Street, the Rose Kennedy Greenway and an I-93 ramp, New Sudbury Street and Bowker Street and will feature roughly a one-acre public plaza and improvements to the Haymarket bus stop.

The building floats above an undulating soffit and canopy that offer an urban front porch to the plaza as an amenity. The canopy protects transit users entering and exiting the Haymarket Station headhouse nearby. The building lobby, which has entrances both to the west on Congress Street and to the east on the plaza, further activates the site by creating a through-block porosity. The building façade is striated in a series of horizontal bands that repeats the curvilinear design language of the plaza. The transparent glass enclosing the office lobby and ground-floor retail is inviting to the pedestrians. Warm tone materials make up the solid parts of the façade and pay tribute to the historic brick veneer of the surrounding North End and Blackstone Block neighborhoods. The glazing and solid materials of the façade are carefully balanced to provide not only great views but also responsible energy and environmental performance.

The plans discuss the new plaza and the improvements to the bus stop:

The activation of the East Parcel Site through rich vegetation will make the plaza feel like an extension of the Greenway.

Public gathering spaces will be concentrated to the north and south ends of the parcel. The northern area may feature stand-alone retail programming, which will activate the open space by catering to the needs of the office workers and residents of nearby communities. This component is also expected to accommodate some of the MBTA's programmatic needs for the adjacent bus station, such as a restroom for bus drivers and a manager's booth. The southern plaza area is expected to be more flexible and provide space for diverse seasonal programs such as food trucks and pop-up markets. There is also an opportunity for the existing art installation on-site, Sudden Presence, to be relocated within the East Parcel Project Site.

The Haymarket Bus Station features undulating bus shelters with PV panels and new seating. Elements such as a digital transit screen and ticket kiosks will be thoughtfully integrated into the overall design.

Remember when running in 2006 Governor Patrick championed a $1B bill to invest in the local life sciences industry (passed in 2008) and the opposition was all “that’s way too much! How will we pay for it? We should scrap this and double down on the film tax credit!”?

Recent UHub stories seem to point towards that billion-dollar legislation being a good idea that has long and prosperous payoff. We should heed the lesson.

Yikes. Film shooting is, uh, inherently mobile. Once the tax credits disappear, so does a lot of the filming.

The correct answer was to invest in developing a biosciences cluster... because those companies and people tend not to leave once the cluster is strong.

The evidence is that private capital is very busy trying to build life science infrastructure to support the demand for space on Boston. Your theory is that the public should have been taxing citizens and denying resources to other public priorities to build these on spec hoping they would come.

How would Patrick's proposal have been better for the public? Now, private capital is taking all the risk to build the infrastructure to support the modern life science space in Metro Boston. The idea that you "build it and they will come" is a stupid use of taxpayer funding. How about "permit it when they want to build" and then tax the real estate, corporate profit and income of high paying salaries. You would have given public money to build, tax breaks to corporate profit and incentives to individuals to relocate when they want to do it on their own.

Such stupidity is this. Or, were you part of the administration? Then it is just sour grapes.

Thanks for the name calling

Sorry for the microaggression

Since you can't reply to the dialogue, I'm sorry to melt your snowflake.

Haha, you have no idea what you're talking about Turtle-Boy Jr.

Patrick did get that bill passed to give tax breaks for biotech firms. That's how it works in the real world btw, you create tax credits for what you want others to build. It's hilarious you think the State would build actual infrastructure and buildings to try to attract these companies. It was done and we are seeing the benefits of that. Keep that angry, uninformed rambling back in Wormtown.

Didn't Patrick's proposal become law? Like, we actually did the thing. And it seems to be working out for us. You are arguing against hypothetical outcomes that would have played out 13 years after we actually, in real life, created a 10 year long initiative.

Interesting article today in the Boston Business Journal. It's a national article (paywall) on life science investment being "sticky" with regard to the established large hubs, but has this interesting stat about Boston:

In fact, 74% of the $98 billion raised by life sciences companies in five consecutive quarters, ending in Q1 2021, were from ventures based in Boston, the San Francisco Bay Area, San Diego, New York and New Jersey, Cushman found. Boston alone accounted for 27% of all North American investment in the space during the same time period.

but well done on the photo caption, Adam.

Oh wow, I missed that

Problem of the hour: Red Line without power
We could call her Downtown Abby
DA: Party at downtown hotel with two men, four girls ended when one of the men accidentally shot one of the girls in the head
An early winter comes to Devonshire Street in New York
Citizen complaint of the day: Frickin' potheads on the Common
Not quite the waiting room in Beetlejuice, but ...