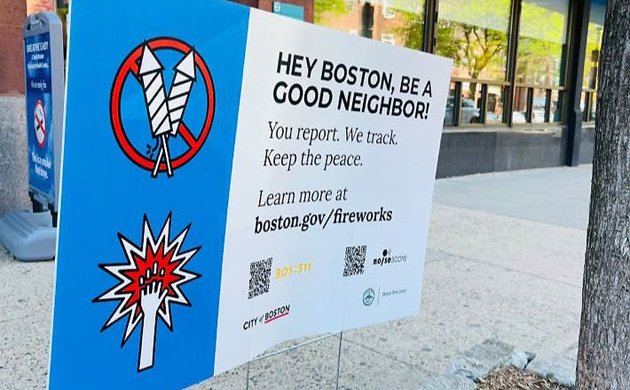 A fed-up citizen files a 311 complaint about 311 fireworks complaints:

311 closes out every fireworks case and says not to post on 311, and then puts signs all around southie, like the one pictured, to report to 311. THIS is why things never change.

The complaint was closed, with this note:

Case Noted. Thank you for contacting Boston 311. This matter needs to brought to the attention of the police when and if it's taking place. This is for non-emergency, non-crime related city service requests. 9-1-1 should always be called to report any crime, noise complaints such as loud music and/or loud parties, fireworks etc. Your case has been noted and reviewed, thank you for using the 311 app.

The city Web site listed on the sign says:

Neighborhoods:
Boston
Free tagging:
fireworks
311
Ad:
Like the job UHub is doing? Consider a contribution. Thanks!

Working for APCC is the

Is that the Air Pollution Control Commission you're referencing? If so, you're barking up the wrong tree, they deal with noisy industry, AC units, etc. https://www.boston.gov/departments/environment/air-pollution-control-com...

p.s. once again, please back up your allegations of corruption with actual facts, otherwise please lose the hackneyed Howie Carr persona, its lame.

Who mentioned corruption? I

Who mentioned corruption? I'm talking about being paid for doing nothing. Ignoring for a second the fact that fireworks is both noise and pollution, what does APCC ever done? Except for rubber stamping after hours construction permits:
https://docs.google.com/spreadsheets/d/1_LF91ZizQbe6JLcFiF84WGEG27Qzkgnl...
Is "Make Building Weather Tight" a valid reason for after hours work?

They send a police unit and the cops drive by ...case closed.
Life in the city, deal with it.

How dare people want to sleep

How dare people want to sleep at night!

You'll lose more sleep being frustrated over the noise, than from the noise itself, holding that attitude.

Why do you hate veterans?

They did absolutely not of that in my neighborhood last year, despite being under half a mile from BPD HQ. Fireworks (not firecrackers, legit fireworks) every day and night from Memorial Day well through September. A decade of living in Boston & it was never anywhere near as bad as 2020.

The cops should be arresting and locking up anyone setting off fireworks, caught with fireworks or just suspected of maybe possessing or using them! More police on the streets, especially in minority neighborhoods! Never mind defund the police, we should pay an extra tax on a Fireworks Prevention Unit that’s sole purpose is stop this chaos!

311 is hit or miss. Sometimes they get the job done, other times they are totally useless.

Marty? Kim? Michelle? Anyone there?

All three sides have a

All three sides have a disconnect here.

For the caller the disconnect is that the reporting is for tracking purposes only. This is for City Hall to find hot spots to pay more attention to not for immediate results. 311 does not handle immediate results.

For 311, they don't seem to think they should even be tracking these thing. A better answer would be thank you and direct the person to also contact 911 for immediate results. This is worded so they can claim that the case was noted but clearly they don't want to hear from you again. In reality it is their job to track.

For City Hall it is a management and leadership issue. Making sure that the message of the nuance is communicated to both residents and staff. The leadership to ensure staff follows through on the directive.

Yu can have all the directives you want but if front line staff and their supervisors have no interest in following through then you are left with nothing. People think leadership is just tossing directives out into the air but in reality it is about ensuring things get done. Politicians are constantly just coming up with new ideas when half the time just following through fully with the plan in front of them would get the job done. Many politicians these days don't seem to think they need to learn how the system works before they go to rewire it.

There are only two parties here

I thought 911 is only for real emergencies, not noise complaints like "loud music and/or loud parties". In Malden, I've been told (with a loud sigh to let me know I'm an idiot) not to call 911 for that, but to call the police station directly.

We've been told for decades, it seems, to call 911 for anything that might require a police response, even if not an emergency.

What about State parkland?

Chestnut Hill Reservoir is covered by the staties. There are so many fireworks set off there but I’ve never heard State response. Holding out hope that staties will respond better than BostonPoliceCtr

If people are firing these off near a reservoir or off of a boat or where they might start a fire on DCR land, you might try the Environmental Police.

I called them when people were firing them off in the Middlesex Fells in 2016, during a drought where the Keetch-Byrum index (https://www.drought.gov/data-maps-tools/keetch-byram-drought-index) was pretty bad. They actually came and had words with the people shooting them off - and it didn't happen again.

Living in Allston, summer of 2004, our apartment backed up against one across the alley that had summer subletters from Ireland who were having a BLAST, up literally five nights a week until 3 or 4 AM, out on the fire escape, singing, being rowdy, and generally enjoying being young in the city in the summer (yes, I was envious). I called 911 a bunch of times, and they yawned and never did anything.

One night, I couldn't deal anymore, so I ran out the back door in my jammies and unleashed a tirade at them. I told them I was going to the cops and filing a complaint. I just couldn't take it. They were mostly quiet the rest of that night.

The next morning (i.e., 4 hours later), I went in person to the Brighton station to make a complaint. The officer was like, "Yeah, looks like you've called in several noise complaints." I said, "Yeah, but this time they had a tin whistle." "Tin whistle?! Well, that settles it. There's still not much we can do except put an orange warning sticker on the building's door."

God bless him, he did put that sticker on the door, and that was the end of the insanity. I can only imagine that at least one of them the next day said, "Holy moly, that crazy guy last night actually did it."

An orange sticker... ah, the

An orange sticker... ah, the irony.

Never even thought of that. I guess the next step would have been to round them up in a paddy wagon.

I'd love to know where every mayoral candidate stands on these stupid things.

I think 311 is good for things like missed trash pick-up, potholes and burnt out street lighting. If you start calling about things like this or loud music, etc.; don't bother, "Case Closed."

Dead animals gets them out

Dead animals gets them out quickly too.

yes that happened to me last night - so I called 911

Typical City Hall - one department doesn't know what the other one is doing.

I called the City 311 last night based on that Park sign. They told me they didn't deal with it.

Can the City place these

Can the City place these signs be to the large Firework billboards that they allow?

This is so Boston City Hall.

This is so Boston City Hall.

Whens the last year there weren't fireworks in Boston?

What year do you think they won't be a thing anymore?

Where do you live?

I'm sure we can fire off a few bottle rockets and spinners so that they land on your roof.

All fun and games until a house burns down, amirite?

I live around Wood Ave and there's always fireworks. Just be quiet and deal with it or move.

Literally, you're contributing nothing.

The city Web site listed on

The city Web site listed on the sign says:

It's almost as if the city doesn't actually give a fuck about fireworks.