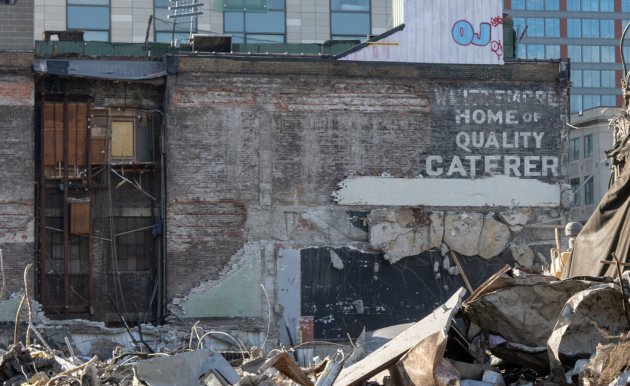 Nick Aldwin snapped this photo yesterday of 1270 Boylston St. in the Fenway, showing advertising for the C.C. Whittemore Caterer - a paint job that may have been hidden from site for more than 100 years as the building and the former garage that sort of got grafted to it next door went through decades of transformations, ending up as a series of clubs and bars.

The building, slated for demolition to make way for an apartment building, was built in 1919 as the new home of a successful Back Bay caterer, so he would have more room to make baked goods, ice cream and other foods and then pack them up for shipment to customers.

But while the company's name remained prominently inscribed in cast stone on the front of the building, at least until the mid-1930s, when it went bankrupt and was bought by a maker of canned Chinese food, the side paint may have only been visible for a year. In 1920, somebody built a garage right up to the wall of the catering company.

Like the Whittemore building, which eventually became home to 1270 and later the Baseball Tavern, the garage - what's left of which you can see at the bottom of Aldwin's photo - is scheduled to make way for the apartment building. Aldwin is interested in the history of that structure, former home to Ramrod and Machine, and went down there yesterday to take a look at the demolition and noticed the Whittemore lettering.

He notes that in addition to the Whittemore name, you can also see the boarded-up window and shaft for the dumbwaiter - on the left of the photo. Whittemore may have used to move finished food - baked goods on the second floor, ice cream in the basement - to the first floor, where workers would assemble orders to be delivered.

Earlier:
Before the bars: The food history of 1270 Boylston.

Poor wording on my part: 1270 is the building that's the focus of the photo, which was home to the Baseball Tavern while the debris in the foreground is part of what's left of the longer garage building, where Machine was. I sort of elided them together because they always kind of seemed to be part of the same overall thing, but, yes, they were two separate buildings.

Magoo has experienced poltergeist activity before. In Magoo’s last house next to a cemetery a succubus would visit Magoo at night. It was a terrifying experience. Magoo was able to ward off the evil spirit with Sage. Magoo.

I love a good dumb waiter. That's so cool that they just covered it up all those years ago and you can still see it there today.

It looks like there is some PVC pumping in the space above it. I wonder if the plumber or contractor had any idea what they had exposed when opening the hole to install the pipes of if they were just surprised to find a big open space.

I wonder why they've left this building for last?

The rest of the block is gone, with most of the debris already carted away, but they haven't even really started on #1270. Is it more of a demolition challenge for some reason? Maybe the brick?

Boston University to hold in-person commencement; Harvard to go virtual again
North End restaurant that had been warned about Covid-19 issues before gets a one-day license supension for new violation; three other eateries also dinged
Board approves two marijuana shops in Fenway and once again rejects half-mile buffer between cannabis concerns
Eastern Standard, Island Oyster Bar in Kenmore Square have closed for good
Northeastern planning outdoor commencement this spring - and may have a separate gathering for last year's graduates
Even our snowmen don't go out without a mask, some hand sanitizer and an iced coffee