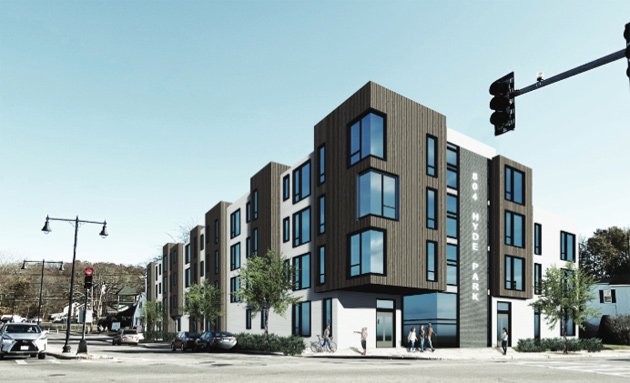 The Zoning Board of Appeal today approved a four-story, 34-unit apartment building on Hyde Park Avenue at American Legion Highway.

The proposal by Whiteacre Properties of Framingham calls for 19 parking spaces.

The board agreed to that lot, shaped like a pork chop, or in the more modern parlance preferred by the developer's attorney, a Tetris piece, warranted variances for such things as frontage and building height.

Some residents said they opposed the proposal both because they said it was out of scale with other buildings and because the area is relatively poorly served by the 32 and 14 buses and so there wasn't enough parking provided. Others, however, said the 32 was fine.

The board approved the proposal subject to review by BPDA designers. Board Chairwoman Christine Araujo said she hoped the BPDA could get the developer to change the current design to something that "really complements the neighborhood," rather than "a standard block just dropped into the community."

Is the ZBA just throwing darts? Enough parking here, not enough there.

And the area is quiet enough that those who don't have spaces off street can park on Hyde Park Avenue. Or they could remove the bike lane on American Legion. In short, there are options.

Assuming that was sarcastic

It should have zero. This is a city. Well, I guess as a new building, it should probably have two spots requiring an accessibility placard.