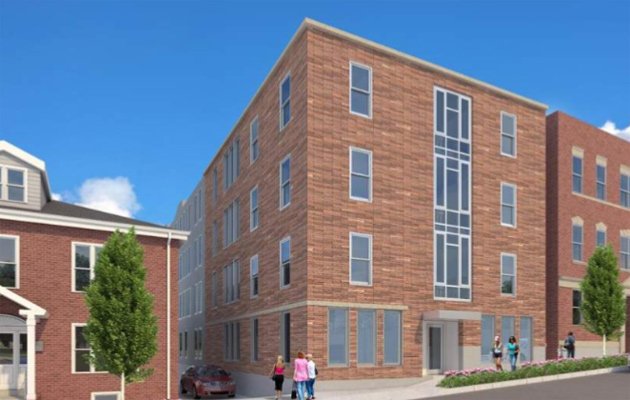 A developer has proposed replacing a small parking structure at 226 Magnolia St. in Dorchester with a $4-million, four-story building with 28 small studio apartments and a roof topped with solar panels.

Shanti Acquisition of Dorchester filed its plans with the BPDA under Boston's "compact living" pilot, which allows units smaller than normally required as one way to lower the prices of the units. In this case, most of the units would range from 356 to 398 square feet, rather than the minimum 450 square feet the city normally would require for new studios, - three units would be 471 square feet.

Four of the apartments would be rented as affordable.

Shanti is owned by Solmon and Rokeya Chowdhury, who both develop small residential projects and run the Shanti Indian restaurants in Dorchester and Roslindale.

The building, which would back up against Ceylon Park, has no parking but would have storage for up to 50 bicycles.

In addition to the BPDA, the project will need a number of variances from the zoning board, including ones because of the lot's small size - 5,772 square feet - the building's height and density on the lot and its closeness to lot lines and the lack of parking.

there is basketball court near this address which has amazing views of the city. it has been in some films.

More of this please.

There could be more affordable units to give it a 10/10 score but considering it isn't "lab space" or "luxury condos", I'll turn my head.

...and I say this as an architect: achieving all of that AND not making it ugly AF is possible...if you know what you're doing

Architect really mashed the ugly button on this one.

They also own Dudley Cafe in Nubian Square.

They can make it not ugly

Pretty or ugly architecture is very much in the eye of the beholder and fashion of the day. Boston City Hall was once considered an architectural wonder; 50 years later it was voted one of the ugliest buildings in the country.

Moreover, architectural elements that don’t please people with bourgeois tastes (my favorite in that category is vinyl siding) have some real benefits; they helps slow down gentrification. That’s one thing I like about the street I live on. When it comes to preventing people with too much privilege and entitlement from moving in my neighborhood and pricing out the current residents, I much prefer “ugly” architecture than high crime rates, pollution or underachieving schools.

Where will they all park?

Until their job moves out to

Until their job moves out to an office park along the highway.

They could park on the street, like people have been doing in the neighborhood for almost 100 years. Except the city decided that people in new studios under 450 square feet aren't allowed to use street parking that anyone else can use.

An excellent question, Larry, especially since this neighborhood doesn't have sticker street parking.

I'm all for 4-story apartment

I'm all for 4-story apartment buildings. But wow, this looks like today's version of the worst kind of 1960s brick cube.

And I have to keep saying it: it's offensive that the "compact living pilot", which just means allowing more of the small units we used to allow, means residents can't get street parking permits. Clearly it's good public policy to prohibit street parking for people who live in buildings with no off-street parking, to preserve the free use of city resources by people who lived in the neighborhood longer and might have driveways.

Except in this case, there is no permit parking in the area. Does that mean people in this building are allowed the same transportation rights as their neighbors, at least until the future day the permit-only signs go up?

A brick(?) building that may actually last a century and doesn’t consist of cheap wood?! Progress. I don’t find it to be as ugly as the cheap/generic ones that have been poppin up everywhere.