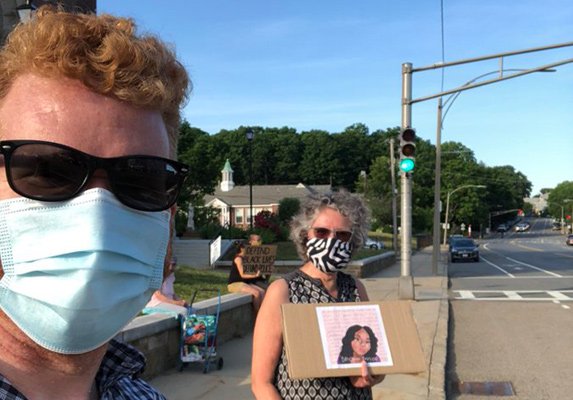 I want to address the Rally for First Responders that was held in our neighborhood the other night. I've spoken with many constituents who attended because they wanted to show their support for the good police officers whom they know and love.

They feel as though no one is standing up for these men and women who put their lives on the line every day. I get that. But I believe holding this rally right now was the wrong approach.

The country is reeling from the death of Black & Brown people at the hands of law enforcement. Breonna Taylor was a first responder. Yet the officers who took her life have yet to be arrested for the crime they committed. When I say I support first responders, I support her too.

Many people who attended the rally feel that they can be both pro-Black Lives and pro-Police, and I don't doubt their sincerity. I would encourage everyone to think of this from the perspective of a neighbor of ours: a Black man who felt his pain & anguish dismissed by the rally.

Think of the message that was sent when a Black man had his car spat upon while simply driving home from work. Think of the Black reporter who covered the rally as someone stood inches away from his face, yelling and giving the finger.

Don't we all agree that is disturbing, offensive, and simply wrong?

The crescendo of voices affirming the fact that Black Lives Matter is a clarion call that all of us should heed and in turn work towards change. I have spoken with hundreds of constituents expressing their pain, and their calls for change are impossible to ignore.

Among these calls are law enforcement professionals and police officers who want to be part of that change. #BlackLivesMatter, and we shouldn't feel as though we need to compete with that message or undermine it. We should reach out, listen, and be part of the solution.

Profiles in courage you are not. You pontificate about problems with police in other states but say nothing about the beating of an elderly black man by the Transit Police at Forest Hills station which is in your district.

No one noticed Matt at the standout because you can

While I am not personally

While I am not personally offended by the joke about his utter whiteness I am not fully sure if joking about the skin tone of an elected official at a rally based on race and equality is the time and or place for that?

Should he be out

Glad to hear you’ve never lost anyone to cancer.

Low-water point on the Charles
Coronavirus kills a part of the West Roxbury funway
Goofus and Gallant at Millennium Park
Vietnamese place in West Roxbury has new owners, name, menu
Here's looking at you, kid
Bendi boi along the Charles River