Walsh: No more parking tickets or towing for street cleaning, but more important: Keep washing your hands and staying away from other people 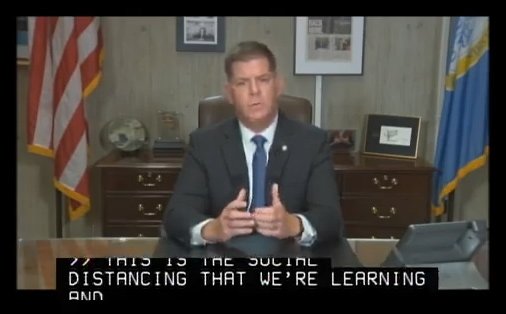 Walsh in his address.

In his latest address on Covid-19 - which he gave alone from his office in City Hall instead of at a crowded press conference outside - Mayor Walsh pleaded with Bostonians, especially its younger residents, to practice social distancing to help slow the spread of Covid-19 and to help their older relatives.

"Think beyond your own personal concerns," he said to residents who might be feeling they have little to worry about themselves. "Flattening the curve, that's what this is all about."

Walsh listed steps the city has taken to do that, such as closing schools and libraries. But all Bostonians have to do their part, as well. He said while talking to his mother, Mary, on the phone last week, he told her about washing her hands frequently and then told her "no more hugs" for her nieces and nephews, in fact, he said. "they probably shouldn't come over for awhile.

Walsh added that among the steps the city is taking to help residents get through being stuck at home is to not ticket or tow cars on their designated street-cleaning day.

Walsh took note of the shelter-in-place directives issued in the San Francisco area and that are being contemplated by New York. "We are not at that point currently," he said

He added that the Boston Resiliency Fund, aimed at helping medical professionals, first responders and other people hit hard by Covid-19 changes, raised $10 million - half its goal - in 24 hours.

And he said he is confident that Bostonians will get through this. "We are a city of miracles and comebacks. There's nothing we can't do when we stand together. ...We've been down before, but we always get back up," he said.

He said yes during telecast

He said street-cleaning would continue but no ticketing or towing, so how useful it will end up being, we can only predict.

In North End, nobody's going to move their car. Maybe they'll be able to get some trash and debris with brooms and leafblowers. In less overcrowded streets, people might move their cars.

At least there's less litter to begin with.

You didn't speak down to the citizens of Boston you spoke to them as neighbors.

if the filthy streets aren't cleaned we will be dealing with the plague next.

No mention again of sending non-essential city employees home. Can reporters start asking the mayor and his top advisors about this? He’s got workers at City Hall being put in harm’s way for no real reason, many are older people who should be home.

Start charging for parking permits. $200 for outer neighborhoods per year. Up to $1000 for Back Bay, Beacon Hill. Use the money for virus related causes. Value people over cars for once.

Your insistence on making this crisis all about cars and owners of cars is disturbing. Please get a grip on reality

How are cars related to COVID

How are cars related to COVID-19?

There could be a story about an agricultural club's pumpkin growing contest and you'd still find a way to turn it in to a rant about cars and people who use them. Please get help.

No towing for street cleaning? Really?

This seems extremely silly - how much contact with other people do you really have when moving your car? Even if everyone on the street all decided to do it at once (which itself is a silly idea, since surely you'd see everyone else doing it and decide to wait a couple minutes), you're all still going to be at least a car's width apart. Is there a term for the opposite of security theater - "it makes people happy, so it must be doing something"?

I think the point is, since

Moving the car from the

Moving the car from the street is not the problem. The problem is finding someplace to park it afterwards. On a typical weekday, enough cars leave for work, that the remaining cars can rearrange themselves. That's not happening now with everyone staying home.

If you have way more people

If you have way more people staying home because they can't or don't want to go into work, that means way more cars parked on the street. Which makes it harder to MOVE your cars during the hours that street cleaning would be happening because spots are less available.

That's not the point - there

That's not the point - there is no where to move cars if commuters who use their car are all at home.

I appreciate the mayor

The tooth, the whole tooth and nothing but the tooth
BU, MFA to honor Martin Luther King in online commemorations today
Boston resident first in state with confirmed case of that more easily spread Covid-19 variant, although she's no longer in town
Anybody wave at them?
Study: One in five Bostonians don't plan to get a Covid-19 shot
Leader of Boston Covid-19 response looks at running for mayor