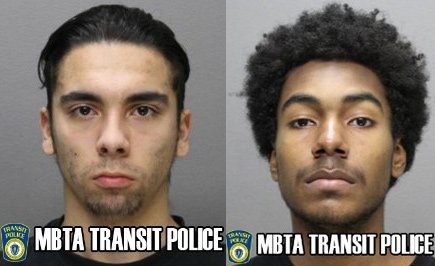 Transit Police report arresting two men they say spent a trip on inbound Orange Line train from Forest Hills "harassing and intimidating" passengers in their car - and attacking one man they spotted attempting to call police.

Police say officers who met the train at Back Bay around 5:45 p.m. on New Year's Eve spotted Tobias Chance, 19, of East Boston and Raashan Severino, 18, of Boston, exit the train, screaming "Number 1!" and pointing at the officers.

Police say the two proved no match in a foot race with officers, who caught up with and arrested them. Chance was charged with assault and battery on an elderly person and witness intimidation. Severino was charged with possession of a Class B drug.

But this is a good time to download the See-Say app. You can report things to TPD while making it look like you are looking at your phone just like anyone else!

Somehow the cops knew to be at Back Bay when the train pulled in.

I was unaware of that app and recently witnessed a minor assault on the T that the transit police were unable to act on because by the time I was able to contact transit police at the destination station, everyone (other than the assailant oddly enough) had scrambled. Downloading it now.

But you shouldn't have to download an app for every police department you might need to contact in an emergency. There should be a regional or statewide app, or maybe even national.

That was the point of 911 - any phone in the country works the same way for getting help in an emergency.

This reduces the operate burden of Triage I believe so it gets routed directly to the agency you are looking to reach.

I know Tobias and was surprised to see his photo in this story. He grew up split between 2 households but mostly in Jamaica Plain and went to school with my daughter at the Curley. Part native american, he's a very creative and artistic He took classes at Mass Art during middle school where he created an impressive portfolio of work. I remember him as an affectionate and diligent care taker of our dog when we were out of town, He wasn't a traditional student and would have thrived in a project based school. Last time I saw him he told me he had dropped out of high school. I hope this incident is a pivotal moment that allows him to turn his life in a positive direction.

Thank you for leaving this

Thank you for leaving this comment. Much as it angers me to see kids harassing my fellow transit riders, I think comments like this underscore the importance of rehabilitative justice. Kids at that age (and I think they definitely are still kids, despite what the justice system says) can still learn to be better people as long as our justice system can manage to show them some compassion instead of just locking them up and turning them into hardened criminals.

This was not shoplifting

This was not shoplifting. Or stealing a car. Or simple burglary. This was a violent assault and battery.

I believe in rehabilitative justice, but until these guys get their shit sorted out there needs to be a secure physical barrier separating them from me and my loved ones.

This is a useful app. ELERTS developed it. Passengers on 30 transit agencies use ELERTS app to report various safety and quality-of-life concerns while on public transportation. You can send a photo (camera flash automatically is off) and the GPS location with a description of the incident. Actionable information for authorities to respond. This app currently helps protect over 2 billion passengers annually.

People don't want to call 911 unless it's REALLY serious. The app lets riders report quickly and discretely 'say something' without needing to get more involved then they want to. Please give it a try.

Holy shit, y’all were actually OK with that license agreement for the see say app? Including the part where they are allowed to publish any content you submit? (So much for anonymous tips!) Including the part where you waive any right to bring any action against them for anything they do while investigating your possible violation of the license agreement? (Say f’rinstance they break into your smartphone and have a look around?

Why are you unwilling to specify where this occurred?
In the lede you stated that it was allegedly on the Orange Line, while in the body you seemed sure it was the Orange Line.

Or could it be that you customarily buy stories from the local elementary school student paper?

Perhaps time to switch to decaf ...

I wrote "alleged Orange Line toughs" because police said they were toughs on the Orange Line, not because I'm unsure which line police say they were on (as for using "alleged" at all, it's because I don't know what actually happened, I wasn't there; it's pretty standard in police reporting).

As for where the alleged activity took place, let's work through this together, shall we? In fact, let's play a fun little game and pretend we're both reporters for a crusading Web site. Well, Universal Hub, at any rate.

We know that T cops were waiting at Back Bay for a train coming from Forest Hills, because Transit Police told us so. OK, technically, Transit Police said it was an "Oak Grove bound train," but using our years of experience writing about and taking the Orange Line, we know that's the same as a train that left Forest Hills.

We know the yelling and stuff had been going on for a bit, again, because Transit Police told us that.

Now, look at this map. It's too small to see the names of the stations, but the T has thoughtfully provided a list of stations between Forest Hills and Back Bay right below it!

Hmm, where exactly could the harassment have taken place? Alas, Transit Police didn't say, [frownie face]. But, again, using our years of hard-won reportorial knowledge, we feel pretty safe saying it happened on the Orange Line somewhere between Forest Hills and Back Bay (let's thrown an "allegedly" in here just to be safe). We go "hmm," again, do we really need to spell that out for our readers, whom we assume have some kind of familiarity with Boston and the Orange Line? After all, we are writing for a Web site the very name of which is an in joke that not many people from west of Worcester will get, so we make certain assumptions about our readers' knowledge. And we conclude that no, we do not need to throw in that extra information, because most of our readers are not from Wisconsin (nothing against people from Wisconsin, we're sure they're perfectly fine people and who doesn't like cheese and beer?).

Looking for a scarf that goes well with red fur - and black and brown and pink
Another T tale of woe: The Green Line is running slow
Northeastern continues moves across Mass. Ave., buys Horticulture Hall
Wayfair, which got tax break to hire people, lays off 350 in Boston
Green Line gets pokey when a trolley gets smokey
If love locks are outlawed, only outlaws will have love locks