Our coronavirus outbreaks started mainly in Europe, but also in Washington State and maybe New York

WBUR reports on a study of 300 Covid-19 cases treated at Massachusetts General for which researchers were able to track their origins.

MacInnis’ data show that by the end of February, the coronavirus had already invaded Greater Boston multiple times from several different sources.

Free tagging:
Coronavirus
MGH
Ad:
Like the job UHub is doing? Consider a contribution. Thanks!

The European outbreaks just got underway at a time when families and students visit.

February through April also seems to be corporate retreat time.

Our government was so obsessed with China that they didn't see it coming.

My Exemption from Shelter-at-Home Orders

There's a reason for that...

'Our government was so obsessed with China that they didn't see it coming.'

'...The Italians must have brought the virus to China, the Chinese said....'
'...When the Italian government complained about that, the Chinese shifted the blame to the U.S. military....'
'Doctors and journalists in Wuhan who raised uncomfortable questions about the virus disappeared. Some of them may have been murdered. At one point in January, scientists in Shanghai succeeded in sequencing the DNA from the virus. The information they gathered from that could’ve been crucial to researchers around the world who were trying to understand the virus and develop vaccines against it. In other words, the rest of us.'

The Chinese Communist Party was basically behaving, well, poorly. There were 200,000 Chinese nationals in northern Italy. They went back and forth on a regular basis to China. There's one of your attack vectors.
Trump initiated travel restrictions on January 31. He delayed European restrictions in the hope that they would initiate their own. They did not, because Trump is a racist and they're not. This delay cost them dearly. By the time he was forced to restrict Europe, the horses had definitely returned to the barn, so to speak.
https://www.worldometers.info/coronavirus/
Jeebus, Belgium, WTF's going on? 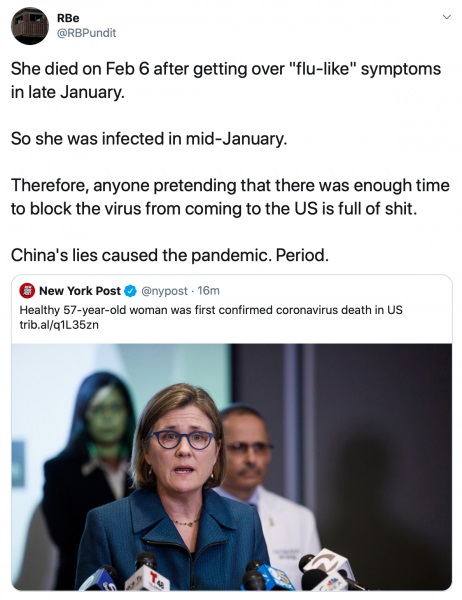 He has zero credibility on this.

And you have even less, since you also cherrypick bullshit, pretend it is "science flavored" and use it to perpetuate racist tropes.

Bottom line: "WHAT CHINA DID!!!!!1!!11!!" wouldn't have mattered in the slightest if trump hadn't dismantled the CDC teams working there, hadn't destroyed the pandemic response team, and had acted like a functional adult rather than a racist golfing toddler in extreme denial.

Do you really think the CDC had a team in China because of happy friendship and good will? LOL!

Stick to your day job, honey. Unless racism and racism "rationalization" are your day job. Then stop. 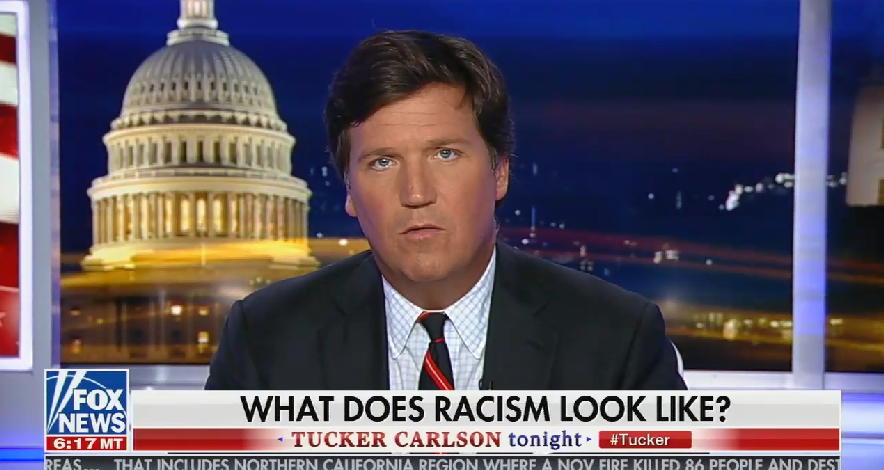 Haahaavid -- begs to differ with you

Well it seems that by taking advantage of commercial satellite imagery to look at 5 or so major hospitals in Wuhan and also monitoring the number of searches for specific COVID-19 related symptoms on Baidu, the Chinese version of Google -- the authors came to the conclusion that" there was early disease activity in the Fall of 2019". In other words -- perhaps the Chinese Communists were working even harder on a Cover-up than we had already suspected.

According to the Haaaaavid Medical School on-line published study*1 -- COVID-19 was already spreading in August 2019.

...we consider that SARS-CoV-2 may have already been circulating in the community prior to the identification of the Huanan Market cluster..... We collected 111 satellite images of Wuhan (multiple sites per image) from January 9, 2018 to April 30, 2020 resulting in 140 successful daily extractions of parking lot volume from hospitals....and 117 from the three high-volume control sites....Between 2018 and 2020, there was a general upward trend of increased hospital occupancy ... [with a] steep increase in volume starting in August 2019 ... and culminating with a peak in December 2019.....between September and October 2019, 5 of the 6 hospitals show their highest relative daily volume.... coinciding with elevated levels of Baidu search queries for the terms “diarrhea” and “cough”.... Both search query terms show a large increase approximately 3 weeks preceding the large spike of confirmed COVID-19 cases in early 2020 .... There is a large decrease in hospital volume and search query data following the public health lockdown of Wuhan on January 23, 2020.....

Had Beijing let the world know what was happening in Wuhan, even say in October -- the pandemic might have been limited to an epidemic in Wuhan and perhaps most of the rest of Hubei Province with perhaps a few controllable outbreaks outside of China.

It was at this point in time [early Autumn], however, where Beijing [Political] as opposed to Beijing [Scientific where our CDC had created a Chinese Clone of itself and the NIH] perceived the spreading COVID-19 as a possible economic weapon of mass economic destruction.

Beijing carefully limited intra-China travel to/from Hubei while simultaneously allowing people to travel between Hubei and overseas places with a lot of Chinese / foreign travel such as northern Italy and the West Coast and Northeast of the US. In particular, hundreds of thousands of people, many of whom were infected essentially commuted to/from Wuhan over the Chinese New Year.

China sacrificed one Province and a few million people who suffered in their lock-up, while the Money and Political Class in Shanghai and Beijing were well insulated. At the same time, -- with a phase lag of a couple of months -- the disease conquered first Europe, and then the US -- setting our economies back a couple of years in the course of a month -- and the disease is now spreading rapidly in South America.

Abstract:
The global COVID-19 pandemic was originally linked to a zoonotic spillover event in Wuhan’s Huanan Seafood Market in November or December of 2019. However, recent evidence suggests that the virus may have already been circulating at the time of the outbreak. Here we use previously validated data streams - satellite imagery of hospital parking lots and Baidu search queries of disease related terms - to investigate this possibility. We observe an upward trend in hospital traffic and search volume beginning in late Summer and early Fall 2019. While queries of the respiratory symptom “cough” show seasonal fluctuations coinciding with yearly influenza seasons, “diarrhea” is a more COVID-19 specific symptom and only shows an association with the current epidemic. The increase of both signals precedes the documented start of the COVID-19 pandemic in December, highlighting the value of novel digital sources for surveillance of emerging pathogens.

Pretty obvious it was here earlier

But nice to see it shown with data.

In total, the researchers identified 14 strains of COVID-19 and released their findings to help those working on vaccines and treatments.