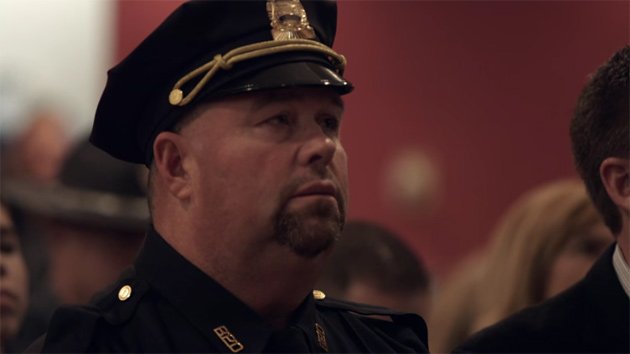 Twitchell during ceremony in which he became a sergeant, from "Boston's Finest."

In 2013, Donnie Wahlberg and his crews followed Boston cops around for a documentary series about how they did their jobs and protected the community from the bad guys. One of them was Robert "Twitch" Twitchell of Norton, who today was one of nine current and retired cops charged by federal officials with putting in bogus overtime payments while working at the BPD evidence warehouse in Hyde Park.

The charges of conspiracy to commit theft concerning programs receiving federal funds and embezzlement from an agency receiving federal funds could mean a prison sentence of ten years if he's found guilty, although if his and the other cases proceed like earlier, similar charges against state troopers, the sentence might involve just probation. Twitchell was charged with putting in for some $25,000 in bogus overtime between 2016 and 2019.

In an episode of the Wahlberg series titled "End of Days," Twitchell was followed as he ended his career as a detective on the Youth Violence Strike Force - the gang unit - just before his promotion to sergeant in Hyde Park.

In the episode, Twitchell discussed his BPD career - and the chronic neck problems he had had since the 1990s, when a suspect he had just gotten out of a car picked him up and slammed him to the ground, problems that ultimately forced him into surgery in 2011. He credited his fellow officers for fundraising so he and his wife - who had lost her job not long before a doctor told him if he didn't have surgery, he could be paralyzed for life - could keep their house.

Near the end of the show, he and his fellow gang-unit officers are shown taking down a gun suspect.

"There's nothing more satisfying for me when we take a violent or dangerous criminal off the street," he said. "It really makes me feel like I'm doing something for the community members who expect us to keep them safe and protected on a daily basis."

We next saw him in his dress uniform for a ceremony at BPD headquarters, where then Commissioner Ed Davis and Mayor Tom Menino officially promoted him to sergeant in Hyde Park.

Wasn't it his brother who beat people up?

Donnie also got arrested for

Could have been accidental. Plus, no conviction.

Maybe didn't happen. The nineties were a different time, you see...

"Angela Rothrock, another hotel guest, said there was no fire. "He poured something on the carpet but there was no flames, no fire." Officers were called to the hotel around 2:30 a.m. and found the lobby filled with young people, said Sgt. Carl Yates, spokesman for the Louisville Police Department."

Could have been accidental. Plus, no conviction yet.

Maybe didn't happen. It was a different time, you see...

it's not just for breakfast anymore...

It's one Nine-Eleven Wahlberg's pals.

Because you know they didn't just pull those names out of a hat.

Ya gotta know the guy who's partner's with the cousin of an aunt of the sister of the neighbor of some schlub who replaced my windshield 5 or 6 years ago and is "wicked close" with Jimmy Kimmel.

These coppers make a good salary.

And they still risk it all by stealing?

Well, they're taught it's acceptable

Police, DCF, and other state/municipal agencies are all backed by tons of case law that pretty much says they can do whatever they want. They're given laws and policies to follow, but when someone doesn't, usually nothing at all happens because victims don't know how to sue/can't afford to, and on the few occasions they do, court decisions come down saying things like the courts must defer to the people doing the work as the experts, people engaged in doing a job aren't personally liable, and it's OK to violate policies left and right as long as you didn't meeean to.

These people (allegedly) chose to steal from the federal government instead of victimizing regular people, and the feds don't fuck around.

They stole from the city and several Boston Police officers dropped dimes to the feds. Whistleblower statues are all nice and good, but in they end they don’t always protect you.

First: I have no personal knowledge here. Everything I say is made up bullshit/general observation. Having said that...please, liberals, tell me about the 'thin blue line'.

As Pete states, maybe there were dimes. I believe it.

So, they drop dimes. The Feds, not a stupid race of people, can tell that when there is an alarm set at 6:00 PM and they are clocked until eight at overtime, something ain't kosher.

Step one is getting all the kiosks done in 6 hours, and just drive slow back to the office and grab a nice long bite along the way and put in the extra two hours.

Step 10 is having one person do it in 5 hours and just telling the other person who used to do it with them to just stay home and they will be added to the OT slip (or the other person comes in, shows their face on camera and swipe card and then just goes home)

I used to work for the City of New York and they had biometric hand scanners everywhere people worked. I guess they had had enough of city employees swiping in and out for their pals.

Missing the forest for the trees

These fellows follow the fundamental philosophy behind details. Any cop on a detail where they see that no genuine service (at 1.5 hourly rate) is provided at some level realizes that they are just pulling in cash because they have the privilege of being part of a legal extortion scam.

These fellows simply followed the philosophical basis of that scam. Treat extra income that they have some right to, whether as details or via other scams.

Detail rate is not overtime rate.

But you would have no way of knowing that.

Being pedantic doesn't win you any points. The way non-cops see and talk about this is what's known as public opinion, and it would be wise for law enforcement (and their supporters) to hear and respect it rather than try to argue and correct it. All snark and condescension do is make people trust you less.

The corruption is built into the system.

(I'm glad someone reported this other, worse corruption though)

Boston’s finest? Oof that hasn’t aged well. Perhaps Boston’s Most Overpaid? When you licks boots you eventually get kicked in the face, Wahlberg. This pigs goatee should have been the first clue something was off.

Throwing these guys under the bus to show that Boston police are truly committed to financial honesty. Even though they will defend tooth and nail the opportunity of legally extorting money in the form of details.

To be fair they only pad the overtime

during their last three years...

You'd have to check the

You'd have to check the contract.
A lot of places - only base pay (average of last three years or whatever) goes into pension calculation. Some places, some agencies, yes - OT gets factored in.

Overtime doesn't get calculated into pension, but don't let a lack of knowledge about a subject stop you from posting and spreading false info, keep up the good work comrade!

THAT, then would explain why

THAT, then would explain why the temptation to steal is there. Facts don't matter when you steal because you 'think' you're not paid enough.

Ooooh! Well, how 'bout that.

a teeny little birdy just told me minutes ago that they'd be wise to explore the production company's selection process and coorespondence with (GOD I WANNA SAY THE NAME) who is THE person you call if you need cops for film and TV in Boston.

And that's ALL I'm gonna say 'bout that but holy mackerel this could be big and deep if IATSE or SAG are involved .

Why the planned overtime shifts?

My question, these were regular shifts for not particularly urgent things, so why would they be overtime in the first place? That is, why schedule these shifts for officers who are already scheduled for 40 hours? Add another position to the roster and you don't need the increased cost of overtime.

And couldn't you hire librarians instead of cops to manage a warehouse of information (albeit in physical form)?

Probably cheaper to pay OT, than it is to pay for the benefits of additional employees.

You'd also have to look at

You'd also have to look at whatever the basic "shifts" are that are defined in the police contract (and how well-defended it is). If "7-3, 3-11, 11-7" (or whatever) is written into the DNA of operations, and there's some sort of duty that needs to be done 12-6 once or twice a week...
It might require something just short of an Act of God to successfully tailor a shift to the work. So, you pay somebody OT to do it outside of their regular shift (or tacked onto their shift) - or you have someone from the day shift start it and hand it off to the evening shift.

City looks to buy land along Hyde Park pond as a park
Hyde Park puzzler solved: Why did the chicken cross the road?
What tha? Big blow brings down trees and wires, floods streets, but at least gives us a nice rainbow
Cleary Square in Hyde Park to be a complete mess this afternoon after state orders emergency shutdown of River Street bridge
Developer makes concessions on proposed suburban-style apartment complex in Hyde Park, but in the end it's still a suburban-style apartment complex
Defunct Cleary Square pharmacy to be replaced with function hall