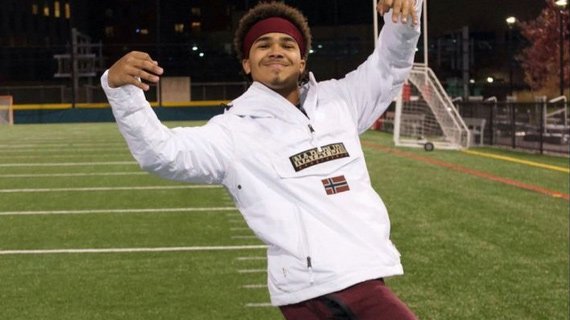 From the family GoFundMe page.

Bolivar del Jesus Soto Jr., 20, was a sneakerhead, somebody for whom sneakers were far more than just something to wear on trips outside. Tonight, a fellow member of the Boston sneakerhead community donated a pair of the sort of chunky sneakers he really liked so he could be buried in them.

Soto, a Jamaica Plain resident, was shot to death Monday night on Church Street in Hyde Park - in an armed robbery.

His family has set up a GoFundMe page to help defray his burial costs. Both that page and his Facebook page have quickly turned into memorials. Teachers and parents at the Rafael Hernandez School, which he attended before going to the O'Bryant, recalled him fondly.

Somebody who worked with him in a program at the Hyde Square Task Force recalled:

Bolivar was a beautiful, charming young man that I had the privilege of working with when he was a youth at Hyde Square Task Force. He had the ability of lighting up a room with his charisma and smile.

Somebody who knew him through his son, a classmate at the Hernandez, wrote Universal Hub tonight:

Bolivar was a sweet boy, a classmate of my son’s at Raphael Hernandez School. A lot of hearts are broken.

We are loosing more young men to violence than from the virus.

The alliteration is cool and all, but don’t make this comparison.

and every time a person is killed it's a tragedy.

However, that is a potentially misleading fact. The murder rate in Boston this year is approximately the same as 2018 which is more or less the average for the last decade. It is up from last year which saw a very low number of homicides.

I can't find numbers for the Covid by age, but I think it's reasonable to assume that fewer youths died from Covid. But what does that mean? It just means we have two problems.

Your political perspective is most inappropriate, disrespectful and unwanted. You don't know this young man and the awesome life he lived. The hearts he has touched and contributions to society he has made in his short time on earth are beyond your scope of imagination and will.

Bolivar was a funny, intelligent, curious soul who wasn't afraid to be himself. He excelled in science and history and was a great kid to have as a student and a friend. Bolivar was destined for big things- far and beyond sneakers.

Yes, so much more than sneakers

I appreciate that sneakers are deeply connected to this story and that Bolívar was indeed a sneakerhead. But he really was an incredible human being. When people have asked me about him since his passing, the best way I can sum it up is: This is the kind of student you hope to teach and the kind of son you hope to rasie. So bright, so incredibly hardworking, so gosh darn curious about everything, so optimistic, so loving. And goofy. And charming. And and and. Bolívar was special. Every loss is painful, but this one hits deeply.

Very sad. Condolences to those who loved and knew him.

Its actually the Rafael

Its actually the Rafael Hernandez not raphel ;-;

Swan River
South Boston aesthetic comes to Hyde Park in new residential building proposed for Hyde Park Avenue
Man shot on Valencia Road in Hyde Park
Playing through at George Wright this morning
There's really only one place for an Olympic athlete to eat in Readville
Dog parks everywhere: Boston wants to ensure doggos have places to roam in every neighborhood