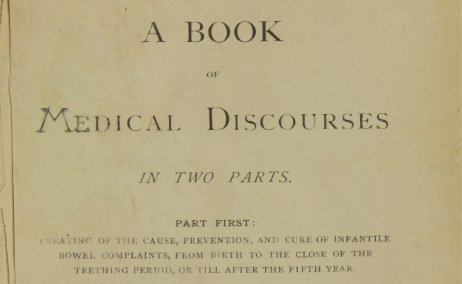 The Friends of the Hyde Park Branch Library have started raising funds for a gravestone for Rebecca Lee Crumpler, who graduated from the New England Female Medical College in Boston in 1864 and whose body currently lies in an unmarked grave in Fairview Cemetery in Hyde Park.

The Friends are hoping to raise between $3,000 and $5,000 for a tombstone for Crumpler. They've collected some info on Crumpler, of whom no known image survives: Born in Delaware in 1831, she grew up in Pennsylvania, but she eventually moved to the Boston area, where she took classes at West Newton English and Classical School and settled in Charlestown. In 1864, she earned her medical degree. After serving time following the Civil War with the Freedmen's Bureau in Richmond, VA, she moved back to the Boston area with her husband, Arthur, and eventually settled in Hyde Park - near the cemetery where she is now buried.

In 1883, she write a book of medical advice for "mothers, nurses, and all who may desire to mitigate the afflictions of the human race," A Book of Medical Discourses in Two Parts.

Donations towards a tombstone can be made to:

This is a fascinating story and a worthy cause. I would like to know more about Dr. Crumpler. Fairview is perhaps the prettiest cemetery in Boston, in my humble opinion.

Check out episode 18 of the Hub History podcast for more info.

If that doesn't work, go to their blog post at
https://hplibraryfriends.wordpress.com/2020/02/05/rebecca-and-arthur-cru...
and use the lower link in the side bar (below the link for membership).

are some of your real friends, Hyde Park Cemetery. this is a lovely story

Dr Crumpler's husband Arthur is an interesting character in his own right. He was enslaved in Virginia until he was about 40 years old, then he used the chaos of the Civil War to escape to freedom. Arthur's enslaver had hired him out as a blacksmith, so he then put those skills to work for the Union war effort. At the end of the war, he made his way to Boston, where he met Rebecca, then the two of them returned to Virginia so Rebecca could provide care to the newly free African American population.

Because he had been enslaved, Arthur was not taught to read and write as a child, and after he was married, he relied on Rebecca for that. After she passed away, he started going to night school to learn literacy and math skills. He wanted to be able to keep up with the newspapers, read the Bible, and balance his own books. If you have a Globe subscription, you can read an 1898 profile of him headlined "Boston's Oldest Pupil."

Wow, this is a name I have

Wow, this is a name I have not heard since the 5th grade when our class helped design a tour for Boston Women’s Heritage Trail. The tour is still being developed by BPS students every few years or so and you can find a stop for Rebecca Lee Crumpler on 73 High Street in Charlestown. https://bwht.org/charlestown/

Thanks to you and your class for doing this!

Strange that BU doesn't want in on this.

The New England Female Medical College merged with BU in the 1860s or so, and BUMC touts Dr. Crumpler as one of their famous alums.

I would think the development would *love* the chance to splash out on a fancy headstone and get some publicity.

Maybe they don't know about it

I'm getting the sense that some folks at the library thought this would be cool and decided to just do something - it's not like they went out and started signing up sponsors (I found out because somebody posted something on Facebook).

Person stabbed in Hyde Park
Some Boston neighborhoods seem to be getting hit harder by coronavirus than others
Mrs. Hawkes made house calls yesterday
Police say man failed at breaking into a closed Readville gas station with a brick; they find him ambling across the line in Dedham
Map of window teddy bears in Hyde Park
Supermarket workers getting infected