The elevated origins of a lowly building in Chinatown 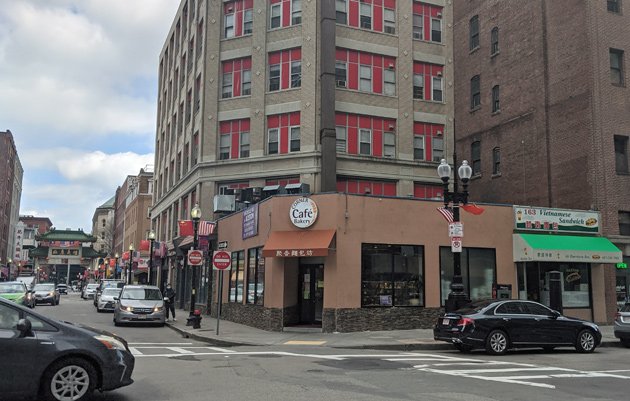 Boston is chock full of historic buildings. But not all of them are immortalized in poems or have plaques that explain why they're historic. Some require digging up research on your own - such as the building at the corner of Harrison Avenue and Beach Street in Chinatown, today home to the Corner Cafe Bakery and a Vietnamese sandwich shop.

To look at it, there's absolutely nothing unusual about the building - except that it's a single-story building in the heart of one of Boston's densest neighborhoods, surrounded by buildings that all have elevators. But the reason the building is so nondescript - and so short - is at the heart of the story it tells.

City records show that the current 62-66 Harrison Ave. was constructed in 1910, although it might have actually been built even earlier, based on Boston Globe classifieds for clerks for Boyajian Pharmacy dating to 1907 there - and a report of a clerk there arrested for cocaine dealing in 1909. By itself, the fact that the simple building has stood for so long is kind of memorable.

When the building did go up, it could not reach higher because elevated train tracks ran right above it, carrying trains on a sharp curve from Harrison Avenue onto Beach Street as part of a waterfront loop that was, for three decades, possibly as close as we'll ever get to a North/South rail link.

The Boston Elevated Railway began planning the el in 1897, even as the Boston Transit Commission was overseeing construction of the nation's first subway, under Tremont Street. As part of an ambitious plan to bring overhead rail to areas as far away as Roxbury and South Boston, the railway built a "road" from Washington Street in the South End up Harrison Avenue, right onto Beach and then left onto Atlantic, where it headed up to North Station to rejoin what the El called the Main Line - and we call the Orange Line (although at first, the Orange Line shared the Tremont Street tunnel; what we now know as the downtown stretch of the Orange Line didn't open until 1908).

A more modern map of the old el (source):

In order to allow for the turn at Harrison and Beach, the railway company had to use its state-granted power to condemn property at the corner, in particular, the multi-story Boston Hotel, which had stood there since at least the 1860s.

Building owner B.F. Shattuck objected to the price the company was willing to pay; in 1902, a jury awarded him $159,71.53, which he had to share with the holder of the mortgage on the property and the man who was leasing the building to run as a hotel.

Beach Street station in 1919; the view is from Harrison Avenue looking down Beach. The building right next to the station still stands - although in the photo at the top it now has red window treatments - as does the taller building down Beach (source):

With frequent service in the downtown tunnel - trains every two minutes in 1919, if you can imagine - and with the decline of wharf jobs and the elimination of the East Boston ferry (after the Blue Line tunnel was built), ridership never amounted to much on the Atlantic Avenue el. The Beach Street station was shut and the rest of the el turned into a North/South station shuttle.

By 1928, the company had restored service from Dudley Square - although Beach Street station remained closed. On July 22, a train derailed on the curve just before the station, sending the train into the closed platform and killing two passengers.

Steam-operated crane was hoisted onto the building to help remove the mangled cars (source):

Boston Elevated shut the Atlantic Avenue el completely in 1938. In 1942, most of it, including the section through Chinatown, was torn down, to be turned into metal scrap for the war effort (some of the metal was kept locally to provide building material should Boston be bombed).

Today, there are two remnants of the el: The one-story bakery building at Harrison and Beach, and the seemingly oddly angled and curved building at Beach and Atlantic, where the el turned left towards South Station:

Where the el once curved onto Atlantic from Beach (source); the building on the left has a more modern building in its place now:

Are affordable delicious and just the tip of their menu

I reviewed 169 Vietnamese Sandwich as part of a

banh mi roundup I did for Dig Boston in the early days of my food-writing career. It was my then-favorite in Chinatown: a great baguette and more protein options than most. (Mei Sum was a close second.)

In the recent Before Time, Ba Le (Savin Hill) and Pho Viet's (Allston Super 88 food court and Newton Centre) were my favorites. I'd always travel for a really great one even when Chinatown was more convenient.

At least as far as I've tried in Chinatown, still tends to be New Saigon Sandwich on Washington St. The one downfall about New Saigon is that there's no place to sit down and eat. I made the mistake of getting a banh mi to eat at my desk at work one day. It's a great way to get ants. The one good thing about 163 is that they do have a few small tables you can sit at, but I didn't think the sandwich was better.

Hard to disagree with that.

Just be sure to bring cash!

Chau's Bakery in Fields Corner is the real spot. A Vietnamese-American co-worker was surprised that I knew to go there. The bread is made on site and the sardine banh mi is my favorite (advice, if you aren't eating it soon get the tin of sardines on the side and add them when you're ready to eat so the bread doesn't get soggy from the tomato sauce).

they're pretty much the only

they're pretty much the only banh mi joint in town that uses Thai bird chilies instead of jalapenos, a big plus in my book

Necessary aside, moment of

Necessary aside, moment of silence for the previous bakery that had been in that building for some time -- several late nights enjoying the most incredible sponge cake I've ever had.

I believe the Eldo Cake House is still around and right near this location. They have that same excellent sponge cake with fresh fruit and whipped cream. I used to work right near there and get their little hot dogs encased in batter for 50 cents each. Probably the most unhealthy thing a person could possibly eat, but very tasty! :-)

As of a couple months ago

It's just up the street on Harrison, other side of Beach. Strongly recommend the steamed pork buns.

That was a great bakery.

The current one has excellent red bean cakes. Best if consumed before noon the day they are baked.

coffee shop before the current bakery?

Wasn't that location the site that also served congee? It was a place where you saw local people coming in for a snack and meet others. I thought it may even have been called a coffee shop. It was a wonderful place with great buns and other affordable items

Yes, it was called Maxim's Coffee Shop, and

it survived 33 years before it closed in 2015. I took its disappearance as an early omen that Boston's Chinatown would likely eventually surrender to the same forces of gentrification that greatly shrunk its Manhattan analog.

In the Before Time, I often pointed to the untenable-rent-driven closings of good, traditional Chinese restaurants in Chinatown and their new strength in Boston's suburbs (notably but not exclusively Quincy and Malden) as similar to NYC, where all the real action has moved to Flushing, Queens and other relatively farther-flung neighborhoods. I got more worried when the high-rises started sprouting up like tall, skinny mushrooms.

Boston restaurants in every neighborhood face an existential crisis. It's soul-crushing to me: dining out at every level of the Boston scene, and to a lesser extent writing about it, has been my obsessive leisure hobby for decades. But for now I can only fret about the many people I love in the industry who are facing grievously-crimped career prospects, financial ruin. Fuck my privileged, frivolous epicurean entertainment and increasingly obsolescent professional food writing: I can't think of anything more trivial at this moment.

I would like to think that the new reality might slow the gentrification tide in Chinatown, but a lot of those places are small and cramped, among the many fine indie restaurants everywhere that might prove less viable in an era where indoor dining has to somehow conform to social distancing.

Is it officially accepted

Is it officially accepted that NYC's Chinatown has shrunk? It always seems to be thriving when I'm there. It's expanded far north and east from its original center at Mott and Pell Streets, and there's dozens of Chinese grocery stores and bakeries on streets like Grand and the Bowery, and neighborhood residents of all ages using the parks. https://goo.gl/maps/jVUSn2nXi4CqV3oA7 https://goo.gl/maps/LYVdFmNyn5BShfpK8

Yes, Flushing and Sunset Park have a lot going on. But Chinatown feels to me like one of the few neighborhoods in Manhattan below 96th Street that *hasn't* gotten too expensive for itself.

I love these articles

My vote is for more of these articles!

Thank you so much, Adam!

Adam, had you written about

Adam, had you written about here before? Or maybe it was one of the city archive guess-the-photo posts?

Probably one of the Archives photos

I've never written about the station before, at least not the reason for the one-story building. That crash, though!

The Archives have a ton of photos of the Beach Street station, both by itself and with crumpled-up train cars at it.

Go to https://www.digitalcommonwealth.org and search on "Beach Street" - you'll find their stuff and other photos (set aside some time, that site is kind of addictive).

I think there are actually three remnants

I have long suspected the decorative archway that serves as a pedestrian gate into Chinatown might be repurposed from an El support structure. It's in the right place, and the right shape and size.

I don’t think so

The paifang was given to Boston by Taiwan in 1982. The orange line was still up.

Unlike the Central Artery ...

They took down all of the el, didn't even leave any girders behind as memorials. Digital Commonwealth has at least one photo of them taking down the el on Beach Street during the war (I think part of the el remained up along Commercial Street in the North End until the 1950s, though).

They were supposed to preserve Thompson Square station in Charlestown after they took down that el, maybe for conversion to a restaurant, but it burned down before that could happen.

The only real el remnant left now is the Dudley (soon to be Nubian?) bus station.

If you want to see a remnant...

... one of the stations was relocated to the trolley museum in Kennebunkport.

You could also consider the

You could also consider the space above the center roadway of the Charlestown Bridge to be an Orange Line remnant.

I tell people about this during my Chinatown tours. This neighborhood is rich with history. This el is part of why Beach and Harrison are wider than the other, smaller and older streets in Chinatown.

And wow, Orange Line service every 2 minutes? If that was possible 100 years ago, why does today's modern system fail to handle the scheduled trains every 5 minutes?

Love these deep dives! Thanks, Adam!