Developer unwraps plans for replacing the Midtown Hotel with apartments 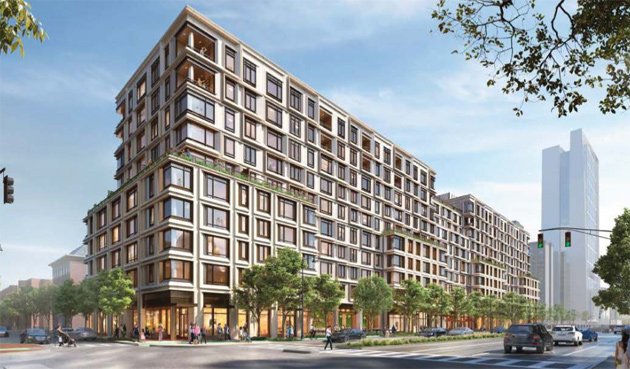 National Development of Newton has filed plans with the BPDA for its proposed replacement of the Midtown Motel on Huntington Avenue and a small residential building on Cumberland Street: A ten-story, 325-unit apartment building.

The company is proposing some ground-floor retail and restaurant space, along with room for storing 325 bicycles. Some 42 of the apartments, a mix of studios and one- and two-bedroom units, will be rented as affordable.

The building, near Prudential and Symphony on the Green Line and Massachusetts Avenue on the Orange Line, will have 153 parking spaces in a one-level underground garage

It is expected that many residents will not own an automobile and will instead rely on car sharing services, taxicabs, or Uber/Lyft, for trips requiring a vehicle.

The site is owned by the First Church of Christ, Scientist, which will lease it to National Development for the new building.

Early on, the church began looking at replacing the hotel, one of the last remaining non-luxury hotels in the Back Bay and downtown, with a skyscraper fronted by a low-rise building on Huntington, but after "listening to thoughts and comments provided by its neighbors," decided to instead seek a developer for a mid-rise building that could be built on the site without the need for any zoning variances or changes, the company writes in its BPDA filing.

National Development will require approval of the city's Groundwater Trust, to ensure it would not affect groundwater levels in the area - critical to ensuring Back Bay and South End building that sit on wooden pilings that begin to decay if allowed to dry out are not harmed.

In addition to putting up the new building, National Development says it will work with the city to improve the intersection of Huntington and Cumberland, to allow for left-hand turns from Cumberland onto Huntington and from Huntington outbound onto Cumberland. Also, some new trees will be planted along Huntington. And:

Retail/restaurant storefronts and entrances, including the residential lobby entrance along Huntington Avenue, have been carefully considered and positioned to provide convenient access as well as potential seating and dining zones for residents and visitors to enjoy the active streetscape and views toward the Christian Science Center Plaza.

The company hopes to begin construction next fall, with the building ready for occupancy in early 2024.

Become one of those places that has $19 avacado omelettes?

It always felt like something accidentally built in the Back Bay instead of Burbank.

Not exactly a Hotel

I always thought it was much more of a Motel.

It also looks like a lot of dorms built around the same time at colleges across the country.

They want to put a building

They want to put a building on the building?
Whoa...

Here they're just tearing down a building. The Society for Putting Buildings on Top of Other Building is down the hall.

Look at the development team

Until they put buildings there too. The Christina Scientists know they are sitting on millions of dollars on valuable real estate. And they know this by already leasing much of their un-used office building to Northeastern.

It's only a matter of time.

Also, I'm probably in the minority but I like the design of this building. Its not uber modern looking nor look like something threw up.

I can very much see it fit into the street scape there. Far more than the single level 1950s bates motel that is there.

The Christian Science Center Plaza is one of Boston's most beautiful concrete parks. It's kid friendly too in the summer. :)

Zoning board approves cannabis shop on Boylston Street in Back Bay; says it can open on Sundays
Dorchester man admits he opened fire on police during the rioting and looting following the May 31 demonstration
Leicester man charged as being crude and lewd at Back Bay station
Developer wants to add five new floors to a row of three-story buildings on Boylston Street in the Back Bay
Hatch Shell is lit
Hotel on Huntington Avenue sure does get around