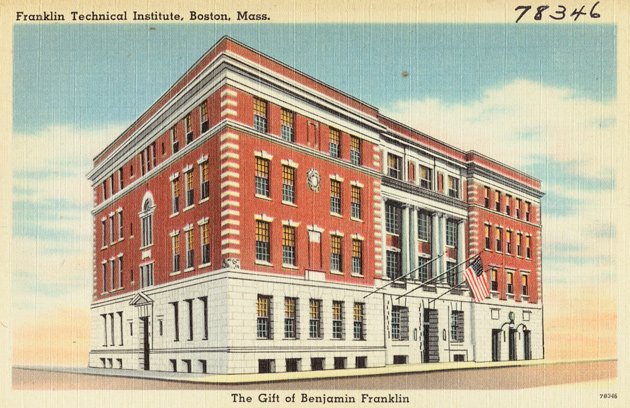 A developer has told the BPDA it wants to turn the current Benjamin Franklin Institute of Technology site on Berkeley Street into a complex that would include a "senior care facility," affordable housing and a building with retail and office space.

The institute, founded in 1905 in part with money from a bequest of 1,000 pounds sterling left by Benjamin Franklin, plans to move into a new building it will have constructed on Harrison Avenue at Melnea Cass Boulevard in Roxbury.

In a letter of intent filed yesterday, Related Beal says its 310,000-square-foot proposal for a triangular site bounded by Berkeley, Appleton and Tremont streets will include a new senior-care building, "adaptive re-use" of the main Franklin Union building for retail and office use and construction of a 20,000-square-foot building with affordable units.

Related Beal says it will open up passages for the public through the site and that its proposal will "enrich the historic urban fabric of the South End, preserving much of the existing structures on the Project Site while introducing new, contemporary and contextual design and extensive landscape and public realm improvements."

The company says it expects to file detailed plans within two months.

Franklin left the money in 1790 with instructions to use it for 10-year loans of between 15 and 60 pounds to "young married artificers," or craftsmen, such as printers, with the 5% interest he decreed going back into the fund, and with instructions that after 100 years, most of the money be handed over to Boston for public works, but with some continuing to be used to benefit people starting out in technical trades for another 100 years.

A problem arose, though, when the city board of aldermen - basically city councilors - decided to buy some land with the money and somebody sued. In 1903, the Supreme Judicial Court ruled the aldermen could not appropriate the money because Franklin had specified that the members of his lending institution's board of directors include the town of Boston's nine selectmen, but after Boston became a city in 1822, it no longer had selectmen. Franklin also directed that the ministers of the three oldest Episcopal, Congregational and Presbyterian churches serve on the board, but by 1903, the oldest Episcopal church in Boston - King's Chapel - had become Unitarian, the minister of Old South Congregational Church wanted nothing to do with the money and then there was the whole doctrinal debate about just what sort of church could properly be called "Congregational" and so which was the oldest.

Solomonically, the court decided the only answer was to have a justice create a board for the fund by appointing men of distinction, "chosen by reason of their qualifications, intellectual and moral, for this important service," and the mayor.

One of those men was Henry S. Pritchett, the president of Massachusetts Institute of Technology, who came up with the idea of using the bequest, by then $408,396.48 to set up an "an evening training school" in the technical arts. But by itself, that amount wasn't enough to start an entire new school. Fortunately, Pritchett visited Pittsburgh, and, as one did, if one were the president of MIT, met with industrialist turned philanthropist Andrew Carnegie.

As recounted by the Supreme Judicial Court in a 1957 decision (over whether the institute could dip into the fund to meet payroll):

The Franklin Union opened in 1905 on Berkeley Street.

a treasure at risk

The concert hall in that property is a true architectural treasure. It would be a shame to lose it. Related Beal is a good developer. Perhaps they will recognize the need to handle such a treasure with requisite sensitivity. One can dream.

There's a concert hall? I

There's a concert hall? I worked there for two years and didn't know that. I don't think the school had a program in music or theater.

I didn't know either but apparently..

Highlights of interior spaces include an auditorium, a one-third replica of Boston Symphony Hall that can be easily transformed into a ballroom and the historical lobby resplendent with its marble floor, wrought iron entrance way and original Charles Mills murals.

The concert hall was by the same designer, using the same template of Symphony Hall. It is also nearly as acoustically perfect. Many groups, including the BSO, have used it as a stand-in for recordings and rehearsals.
If it's not protected as a landmark, it should be.

The same acoustical designer, Wallace Clement Sabine? He invented architectural acoustics, and the Boston Symphony hired him to consult on the building of their new hall. It was the first concert hall designed using scientific acoustic principles, and, weirdly, has not been since surpassed. The first was the best, apparently. I had no idea he had designed another concert hall in Boston. It should be preserved at all cost.

Sabine wasn't an architect, but a junior physics lecturer at Harvard, who was assigned the thankless task of figuring why one lecture hall - Sanders Theatre - was so good, and another, in the Fogg Museum, was so lousy. He succeeded, and a new science was born.

I really had no idea there was a concert hall there. Sounds great. I hope they save it.

Related Beal is a good developer, they already own/manage tons of properties around the city so they aren't in it to make quick cash (hence why its going to have affordable and senior housing).

The concert hall would be wonderful community arts place.

The concert hall is amazing.

It absolutely should be protected.

Who used it? Was it only rented out for closed rehearsals and recordings, or were there public concerts in it?

I attended a public concert there.

About two years ago. The acoustics were perfect and the space is beautiful and in excellent shape. It’s a small concert hall. No seats too far from the stage.

The world's most useless piece of grass on the southerly side of the property gets filled in with a building? One can only hope.

There is open space and then there is open space. Remnant parcels left over from when the BRA carpet bombed the South End could be put to better use in an urban environmental context than an a patch of grass the size of a lawn on a Cape in East Arlington.

Quick, put a CVS there and all will be right with the world.

The students who've attended there over the years should not have an even postage size green space on their urban campus.

You Make It Sound Like It Was A Park

It has been fenced off for decades and can't be accessed from the buildings. It wasn't used.

You make it sound like kids were denied CADD instruction under a group of red maples on a nice spring day by that really cool teacher.

Is endorsed by you.

Is the important point whether or not you yourself can use it?

Because it seems to be.

What are taking about it hasn’t been used?!!

Part of it is used as a Christmas tree lot every December. Events are held there. The other part is used year round for outdoor seating for students and staff, to study, to eat meals or do whatever.
It certainly does serve a purpose for the songbirds and other wildlife that live there. It’s a green space that helps keep the city cool in summer and that provides other environmental benefits just like other green pockets about the city. It’s a lovely quiet spot to stroll by and enjoyed by many in the neighborhood.

That spot certainly must be coveted by greedy developers ready to plonk down another architectural atrocity like so many they’ve littered the city with. But they must not be allowed to do so.

If You Are So Concerned About Open Space Then

Go across the street and take away all three heat grabbing parking lots in Castle Square. You know the 200+ space open space parking area in the middle of one of the densest neighborhoods in the city.

There is "open space" and good urban design. That park is poor urban design. Castle Square tenants having parking spaces when the retail price of a parking spot in the South End is worth as much as a house is parts of Brockton might be the thing to worry about over some small blades of grass.

PS - Wildlife? Really? Is that what pigeons and squirrels are called now? Wildlife?

Don't hurt your back

I hope you got some help, moving those goalposts all over the place.

I think they want to preserve the building, not the fence and the grass.
Fencing can be removed or replaced with something more elegant and the sod can be replaced or supplemented with plantings.

Or did you not realize that?

I know these descriptions are always full of lies, but this one sounds respectful of the building's history and importance.

BTW, as always, thanks for the history lesson Adam!

Benjamin Franklin would be proud if done right.

“The essence of Franklin is that he was a civic- minded man. He cared more about public behavior than inner piety, and he was more interested in building the City of Man than the city of God. He believed that benevolence was the binding virtue of society.”
( Walter Isaacson; page 102 in Franklin biography)

If you would like to look into a crystal ball to see what will happen to this institution, just check out what happened to the now defunct NDEC which used to occupy a prime parcel on west broadway in south Boston. Someone inside franklin institute is making a mint from this.

What's so great about turning a technical school into a nursing

home, or whatever? Technical schools are necessary, because not all kids are cut out for an academic education. There are kids who do better at trade schools and are better off learning a trade, such as construction, being a plumber, auto mechanic, craftsperson, or an electrician, or even a chef, for instance. Also, there's always been the need for people in the trades, and always will be. Moreover, many, if not most of the male-dominated trades are being entered by females, which is also a great sign.

Sure, it's good to use one's brains, but the trades are nothing to sneer at, either.

Agree, but I'm Pretty sure BFIT is moving to Roxbury Crossing, not closing.

. Sure, it's good to use one's brains, but the trades are nothing to sneer at, either.

You did see the link above that they are moving to the old Harrison Supply site between Melnea Cass and Dudley Street on Harrison Avenue, right?

If anything the school will have a lot more room to serve more students.

Biotech developer reaches deal to buy South End office building under construction, seeks to change it into life-sciences labs
Citizen complaint of the day: Some citizens should just shut the hell up, Karen
Pandemic deja vu: Boston Pride canceled again
Man behind bars while awaiting trial on drug charges asked to be released because of Covid-19 fears but refused to get a shot; judge refuses to let him out
South End group revives fund to help people replace tires slashed for parking in somebody else's 'space'
On Saturday, gun-packing drug dealer arrested outside Southampton Street shelter; on Sunday, man stabbed there