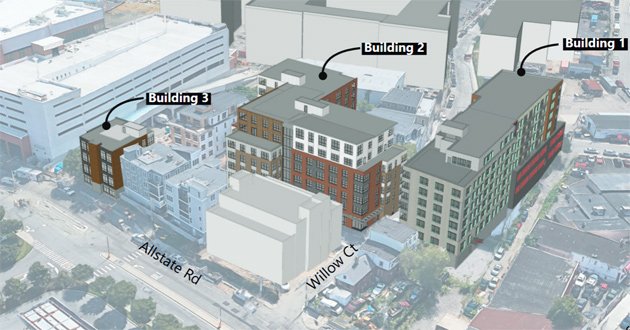 Developer Adam Sarbaugh has filed formal plans with the BPDA for 236 condos and apartments - some of them "compact sized" - in three buildings off Allstate Road in Dorchester that would also include 20,000 square feet of ground-floor retail space, and what could be Dorchester's first curbless way designed to be shared by motorists, bicyclists and pedestrians.

The three buildings will sit atop what are now 13 separate lots along Willow, Baker and Fields courts in an industrial area that developers in recent years have begun to transform into a more residential neighborhood. Sarbaugh first proposed the buildings in January, just before the pandemic hit.

Sarbaugh is proposing to turn one of the narrow streets, Baker Court, into a "woonerf" - a curbless way designed to be shared by motorists, bicyclists and pedestrians.

Drop-off lanes would be built for ride-share cars.

The units would include 79 studios, 89 one-bedroom units, 57 two-bedroom units and 11 three-bedroom units. About 70 of the units would fall under the city's "compact living" pilot project, in which developers get to build apartments smaller than normally allowed under city zoning, on the theory that they can be rented for less.

Two of the buildings would be seven stores, the third, four stories.

Sarbaugh says the buildings would bring benefits even for people who don't live in them - in addition to the woonerf, he says he would replace current utility poles with underground conduits, add widened sidewalks, build a small park and plant trees as part of the project.

Has he ever driven down

Has he ever driven down Allstate Rd or District Ave and seen the really bad behavior from drivers? The wrong way parking, the double parking too. I don't see this a selling point. How about no cars. There is plenty of parking in that area.

As we slog closer and closer to the demise of retail

(and Barr-ing any dissolution of government and/or collapse of society) I'd imagine that rectangular block of stores from Best Buy to TJ Maxx won't last the decade and will follow suit with the projects popping up around it.

Is this a joke? I’m sure the residents would love walking through crowds of homeless and needles on the ground

As we slog closer and closer to the demise of retail

(and Barr-ing any dissolution of government and/or collapse of society) I'd imagine that rectangular block of stores from Best Buy to TJ Maxx won't last the decade and will follow suit with the projects popping up around it.

Sarbaugh is proposing to turn one of the narrow streets, Baker Court, into a "woonerf - a curbless way designed to be shared by motorists, bicyclists and pedestrians.

Yeah... the way people drive through the parking lots at South Bay, I don't see this succeeding.

Some developers must have a

Some developers must have a great deal of faith in the future of Boston for proposing another large development of this kind at this location and at this time. The area is looking better than it used to, but it’s still behind the South Bay mall, other than the Dorchester Brewery there aren’t many hip or attractive amenities nearby, and sluggish city buses or a long unpleasant hike to Andrew Station are not great transit options.

I can’t quite figure out how so many people can/want to pay $2k+ for a studio to $3500+ for a 2Br at the recently completed “South Bay Andi” -or maybe they don’t given that there seems to be a lot of vacancy. But if added supply is going to help bring down housing prices, go for it!

Is a long and unpleasant hike? Buddy, you need to get off your couch!

My property taxes went up this year, which means my mortgage went up.

I also need to take out a loan for exterior repairs.

Even after the loan's payment + mortgage + insurance...

I'm still getting a better bargain than some of these STUDIOs.

I live in a 2 bedroom alone for less, and I am equal distance from downtown Boston with better bus service than this.

Let’s not forget it’s just a

Let’s not forget it’s just a short walk to South Bay jail, methadone clinics, and shelters. Wouldn’t it be nice if the city spread out these services so they weren’t so condensed?

Steps away from beautiful Andrew station!

I'm all for making cities

I'm all for making cities hospitable to pedestrians and bicycles. But I'm not a fan of these so-called shared streets. The examples I've seen around here are unpleasant to walk down or spend time in.

"The Proposed Project is

"The Proposed Project is uniquely situated to the south of the South Bay Center and within walking distance of numerous public transportation opportunities in the area including Andrew Square Red Line Subway Station and Bus Routes 8, 10, 16, and 17. ... It is expected that due to the availability of public transportation and the walkability of the surrounding neighborhood, the Proposed Project will rely on alternative non-vehicular modes of transportation to access the Site."

Even if the 236 condos each have only one occupant, where's the public transit infrastructure to service these folks? Is the T going to add buses? We have this thing called winter in Boston, so walkability and non-vehicular modes of transportation are seasonal.