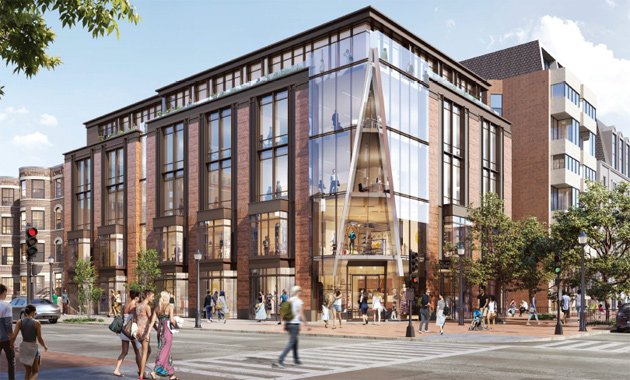 A Chicago real-estate investment firm goes before the Back Bay Architectural Commission next week seeking approval of its plans to replace the parking lot at Newbury and Dartmouth streets - the one that used to have that mural overlooking it - with a five-story retail and office building.

The proposed building, designed by local firm CBT, would have two floors of retail space - five potential stores on the first floor and room for a single, larger tenant on the second, topped by three floors of offices, under plans filed with the commission, which must approve the exteriors of all buildings in the Back Bay historic district.

The commission review of plans begins at 5 p.m. on Wednesday in Room 900 in City Hall.

L3 plans to call the building the Aubry, in homage to the Hotel Aubrey, which sat on the site between 1883 and 1958, when it was torn down and replaced by the parking lot.

All the birds to be killed by

All the birds to be killed by flying into the soulless glass box. =(

The Victorian hotel had a soul. This box looks packaging for the latest iGadget at BigBoxMart.

Is it really that hard to do beautiful buildings anymore?

More expensive and less efficient, yes. But feel free to buy the lot and design/build the beautiful building you desire.

How does less efficient ...

... correlate with beautiful?
At least you recognize the ugliness of this proposed eyesore. It’s not in YOUR backyard though, is it.

If you can afford for that to be in your backyard

I'm sure you could find some way to get over the pain of having a boring building in your neighborhood. Like spending a few more weekends on the Cape maybe.

Clutch those pearls a little

Clutch those pearls a little tighter.

Pearl clutching and giving a

Pearl clutching and giving a damn about other species are not the same thing... wake up.

Are we looking at the same building?

The majority of the facade is typical brick/metal panel window bays. If you flip through the proposal, you can see the current design is even more packed with trim and ornament.

I'm ambivalent to the look of the inverted V form, but it's a nice urban gesture since it's on the corner.

It's really interesting to see the architects proposal get more and more watered down by the commission between the 3 renderings. The initial concept had the corner and cornice strip as a distinct glowy glass material from the window bays so it read more like a curtain opening within a more historic frame. And then is got weaker and more mundane.

Look, there is plenty of absolute garbage architecture out there today, but there's also proper way to do it and the successes often get overblown by said trash. We don't need more generic glass boxes, sure, but this ain't it. We also don't need to build and style buildings exactly alike everywhere and I think this area of Boston is prime for a little contrast here and there.

Disclosure, I'm an architect and someone who generally likes brutalism (not the kind that destroys urban fabrics *city hall cough cough*), stuff like the Boston Architectural College building, Peabody Terrace, and the BPL addition. Fight me. I also adore Beacon Hill. But balance is key, along with a general need for NIMBYism to fuck off.

I have to agree

This version is much better than what was proposed before.

I'm can't imagine the Back Bay folks will be very happy with this not-very-Bostony design in their backyard. Then again, somehow that hideous new construction at Newbury and Hereford got approved, so what do I know?

You're right, they aren't:

Personally, I liked the mural but the proposed building isn't the worst thing I've ever seen. Complaints like "[the design] provided too much exposure to the interior of the building, whose appearance will be difficult to control over time" definitely don't make me more sympathetic to the neighbors.

This actually looks like a pretty good design, particularly compared to the original proposals.

(BTW: the bottom photo below is an older proposal.)

It’s a million times better than a parking lot.

And permanently pedestrianize Newbury Street already. Look at what San Francisco is doing with Market Street.

At the very least remove all

NO CARS. People arrive on Newbury by transit. By foot. By bike. And a few by cars. Those arrive by car can park in nearby garages.

Newbury should be car-free. Go on a weekend - the sidewalks are packed full, with barely enough room for people to walk. All while 25 feet of right of way is blocked by empty cars.

And all loading should happen in the alleys - that's why they're there!

Swapped in the correct main photo

The one I'd originally posted was from last fall and had more glass than the current one, which is more, um, bricky (although both have that skirt-slit thing going on at the corner). And took out the bird image because, yes, it was the old design as well.

Apparently they don't test candidates for architecture school to see if they have any taste. Although admittedly that would be a hard thing to do.

The main part of the building is just moderately ugly (i.e. not too bad by today's standards), but that pretentious, half-closed-shower-curtain crap on its corner is hideous.

Look at the rendering for the proposed replacement for the Aquarium garage.

Can the developer just

Can the developer just rebuild this please?

Build a completely modern steel-framed structure, and hire the people at Disney to fabricate the exterior. In the alternative, tear down some more gorgeous buildings in Roxbury to build unaffordable housing, and "salvage" the materials.

Its a fine looking building.

Its a fine looking building.

Kill the goose that laid the

Kill the goose that laid the golden egg. Newbury Street attracts shoppers and visitors because of its charming historic vibe. This building belongs in the Seaport...not on Newbury St.. Why do people not see that if shopping on Newbury is the SAME as any other street in USA it will not command the tenents or the high rents any longer? Seems to me there is a direct correlation between the number or vacancies on Newbury and the rise of the modern square bay store fronts.

I agree the corner slit glass corner appears to be a reference to a womans private anatomy. Gross.

I'm confused at why this is

I'm confused at why this is being pushed. There are so many comparable ground level storefront vacancies in the surrounding blocks on Newbury Street. Businesses have been being driven out. Is this going to make prices more competitive? I think that maybe appealing to a wider audience due to the proximity to Copley Square with smaller sectioning and more accessible rent tiers would be an interesting concept in floorplan. Also I'm surprised this is passing with how strict the Back Bay Architecture Commission is.