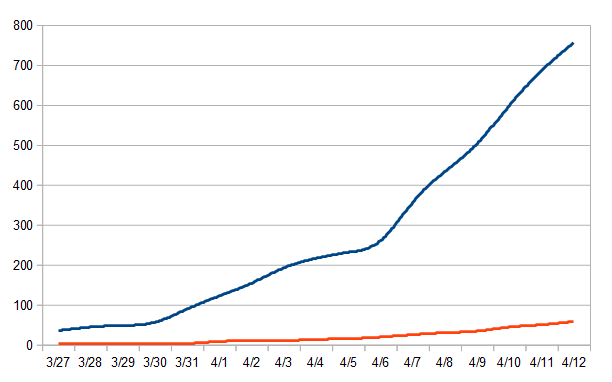 Figures from the state Department of Public Health and the Boston Public Health Commission show that, statewide, Covid-19 deaths are now growing rapidly, as the disease takes hold in the state's nursing homes and other long-term care facilities.

The state today reported 70 new deaths, bringing the statewide total to 756 - 340 of them among patients and staffers at long-term care facilities. Yesterday, the state reported 87 new deaths, on Friday, 96, and on Thursday 70. Note: An especially large jump on April 7 reflects a delay in confirming some deaths from the preceding weekend, DPH says.

In total, the state has reported 25,474 confirmed Covid-19 cases; Boston, 3,916. Today's reported statewide increase was 2,615. On Friday, Gov. Baker said that we'd know we're entering the peak surge of the disease when case numbers rose above 2,500 per day.

~250 dead in MA in the whole span on weeks up to last Monday,

...and how many will still NOT take it seriously?

My downstairs neighbors who

My downstairs neighbors who are still throwing parties, so that’s at least two people. They are “blowing off steam” caused by the quarantine. Umm if you are having people over you are not quarantined.

The death rate is a lagging

The death rate is a lagging metric. It is a reflection of where we were 3-4 weeks ago. New hospitalization rate might be a better comp for your argument that people are not currently taking this seriously.

My prayers go out to the members of the greatest generation. You did not deserve this cruel fate to die alone and abandoned. If their is one consolation you would be so proud of your grandkids the millennials who are often criticized but have marched into battle with the same courage you showed decades ago.

For 75 percent of us this is

For 75 percent of us this is a huge inconvenience and jobs have been lost etc. Not really comparable to anything close to war.

You have your essential workers, which I am kind of in that pile, but once again most of us are hugely inconvenienced but still have our jobs. I do not consider myself in a war, but I am in a crisis.

BUT then you have first responders, hospital workers and grocery workers. All these workers have a much greater chance of getting sick and are being worked day in day out in crowded dangerous conditions. It may not be the same as being directly shot at but many soldiers do not get directly shot at either and they are still at war. In comparison to those who were in the home front during the war, these workers are in more danger then the people who were aiding the war effort back home because the "enemy" is actually here among us.

To swing back to the Millenials... yes those are a good portion of the population that are on those front lines. Between the ages of 20 and 40 essentially. So yes for all that complaining about Millenials being "bad" the rest of the country now finds themselves dependent on the ability of my generation to go to work every day keeping things running. Of course Generation X is right here with us as well, another Generation often put down.

So yes for all that complaining about Millenials being "bad"...

Guess I missed that. Probably drowned out by all the "OK Boomer" noise.

Like, to the dozens of major publications saying that Millenials were "killing" various industries .

Or the Time cover proclaiming that they are lazy, entitled narcissists.

Personally, I'd say that "Ok Boomer" was actually a response to what was already being said about other generations.

I haven't paid any attention to Time magazine since Nixon. You shouldn't, either.

And other generations that are still pretty good

It's worth pointing out that someone who was 18 in 1945 would be 93 today. The surviving members of the "Greatest Generation" are certainly at an extremely high risk if they get covid-19, but most people in senior nursing homes right now are younger than that. A significant percentage of them were people who were alive during World War 2 and that was a hard time even if you were a little kid, but even the senior Baby Boomers have lived lives full of challenges. Living through 65+ years of life means living through a lot of interesting times.

What model does MA use?

I IHME model
https://covid19.healthdata.org/united-states-of-america/massachusetts
shows a New York-like outcome for the state, with over 6K deaths. Baker has estimated far lower numbers, but I have never seen the model shared.

He's said a couple times now that Massachusetts are using what happened in Wuhan as the base of a model, but that they've had to modify that with a couple of factors, including that Massachusetts is less densely populated. He hasn't gotten more specific, though.

less densely populated, and China has a lot more smokers than the U.S. and Massachusetts specifically. Smoking is a big obvious risk factor obviously for respiratory ailments like COVID.

do their duty from time to time with successes and failures--one common failure across generations is awareness, and we haven't got much of that either.

ya know like being ready for stuff or even thinking 'stuff' can happen??

NYC has seen a huge spike in "unattended deaths" -- people dying alone at home. Most aren't tested for COVID-19, though undoubtedly some suffered from it or may have deferred other medical problems from a fear of going to the hospital right now.

Have we seen a similar spike in deaths in Mass?

Is a big problem and will get bigger. People having heart attacks, strokes, etc who aren't going to the hospital - or can't - because of COVID 19. Those won't show up on the COVID statistics.

There will be a coming wave

There will be a coming wave of heart problems like cardiomyopathy in the fall. We are starting to see from the research that covid-19 can cause long term damage to the heart. So to add insult to injury, the people who recover from covid-19 and go home are now at higher risk of heart problems, and the ones with heart disease who survived at an even higher risk of sudden cardiac death. The cardiology field is already talking about this second coming pandemic, so to speak, of post covid-19 cardiac cases. :-(

It's the ICU bed availability

It's the ICU bed availability that's the issue with this. My father had a massive, disabling stroke almost 2 years ago and was in the ICU for a month, during which time he dealt with multiple recurrent fevers and infections as a result of being intubated in a hospital setting and being much more susceptible to infection. In his first year home he was constantly on antibiotics for various infections and he's basically been quarantined all winter. We are keeping a close watch on him now for covid-19 symptoms but also worry about what would happen if he had another stroke, would he a) be able to get an ICU bed and b) could he contract covid-19 just from being in a hospital setting? c) if he did need a ventilator and there was a shortage, would someone younger who hadn't had a stroke get priority over him?

The data coming out now is

The data coming out now is actually showing a sharp drop in cardiac events coming to the hospital - which makes no sense because people are going to continue to have heart attacks with or without a covid epidemic, covid doesn't cure that. So the thinking, and fear, in the medical community is exactly this - people who are at risk of heart attack are either presenting with covid first, or dying at home before there can be a medical intervention.

I have had cardiac events, but I would be reluctant to go into a hospital with this going on. Unless I was convinced the chest pain or trouble breathing was not going to pass, I would stay home. I suspect a lot of people who would otherwise have rushed in at the first possible sign of heart trouble are also holding back.

Also most hospitals have

Also most hospitals have cancelled all their scheduled elective surgeries. So if you are having an elective or just preventive surgery for a problem that is delayed or cancelled, the likelihood is that it may be a few months or years but we will definitely see an uptick in problems or even deaths caused by this reprioritizing.

A lot of pneumonia deaths

A lot of pneumonia deaths will be later recoded as COVID-19 once they have time and tests to test those samples.
The early covid deaths were underreported especially in NY; because of the lack of tests in some areas, hospital workers were instructed not to waste a test on a dead person. When you're overwhelmed with patients in a crisis, getting accurate epidemiological data takes a back seat to treating the symptoms in front of you. So I am thinking we won't know the full scope to a high degree of accuracy until this thing is over and we've had some time to breathe.
Also, good luck getting accurate data from the states that aren't following any social distancing protocols because they don't think they have any cases, and don't have tests. Without national federal testing requirements accurate data is going to depend on states, and the states' ability to test depends on the the availability of the tests and that state's healthcare system not being overwhelmed.

At nursing homes, yes. But

At nursing homes, yes. But they at least are not alone.
A lot of seniors live alone. People have been told to stay at home unless their symptoms are really bad, as in, they really can't breathe. By the time people get to the stage of not being able to breathe that's taking a real gamble. Add to it the self-isolation instructions, and if you live alone or you don't have family checking in and looking out for you, I would say that increases your chances of dying unattended. I'd be afraid I'd just stop breathing in my sleep and no one would find me for days.

One of the issues that comes

One of the issues that comes with trouble breathing can be confusion because your brain isn't getting enough oxygen. That can exacerbate the problem of figuring out when it's time to get help.

Here's some data for Mass.

Here's some data for Mass. and it confirms that deaths overall are up in Mass. more than just the confirmed COVID-19 deaths:

In all of Massachusetts, deaths for people 65 and older increased by 3.6% in March from the same month, on average, during the previous three years. The comparison to 2019 was particularly dramatic, an additional 250 deaths across Massachusetts. At the same time, the data shows that increase can’t be accounted for by the official coronavirus tally alone: only 89 deaths statewide were attributed to the virus in March, according to state Health Department data.

Stah Wahs, Boston style
Ho, ho, ho from Mayor Flynn
Boston to fill in as 'harsh desert world' next month
After a couple of weeks of declines, Boston Covid-19 numbers going up again, and fast, Walsh says
Roslindale supermarket getting new name and renovations
The case for an elected Boston school committee