Condos proposed for Hawthorne Street in Roxbury, in project that would preserve and reuse historic neighboring church 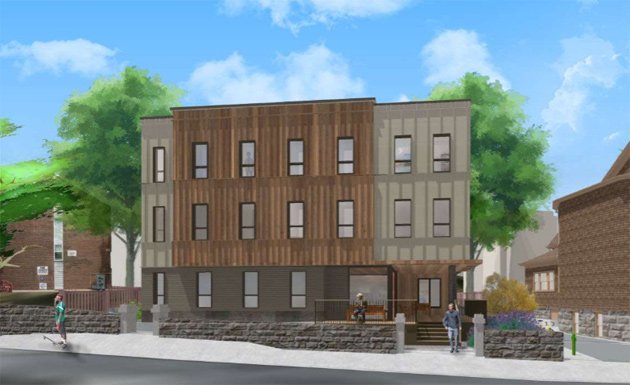 Historic Boston, Inc. yesterday filed plans with the BPD to build a three-story, 14-unit condo building on Hawthorne Street in Roxbury, behind the currently empty St. James African Orthodox Church on Cedar Street, which the group would renovate into commercial space after completing the condos.

All of the condos, split between one- and two-bedroom units, would be sold to people making no more than the Boston area median income.

City Realty had originally bought the church, for $1 million, in 2015 and planned to tear it down for replacement by 30 market-rate residential units. After an outcry in the neighborhood - and an injunction filed by the city - the company agreed to sell the church to Historic Boston in 2018, at a 40% markup over what it had paid for the property.

In recent years, Historic Boston has developed projects that feature modern construction as a way to preserve a historic building on a site. In Roslindale, for example, it worked with a developer to renovate a former Boston Elevated trolley power substation into what is now a beer hall - with apartments in a new building wrapped around it.

According to the group's filing, the church was built in 1908 as the Norwegian Evangelical Congregational Church, in "a style that combined Gothic and Shingle style influences, as well as elements of Norwegian traditional ecclesiastical design." St. James bought the church n 1955, when the Norwegian congregation moved to Waltham.

HBI says it does not yet have a specific tenant for the church - where renovations would include opening up loft space near the top for daily use - but says:

The church after renovations:

This structure should have 7 gables. Here ye, here ye! Magoo.

Love to see churches turned into something useful and tax paying.

This leads to the further gentrification of another working class neighborhood in the city, even with an affordable component in the condos.

Anyone who has been up on Fort Hill in the past few years has seen longtime residents pushed out for condos and upscale housing by people who can't afford to live off of Pond Street.

The writing is on the wall for this area. East JP it will be. How soon is it before a Little Donkeyesque restaurant is in John Eliot Square? Probably sooner than you think.

Who's owned a Subaru in the last 5 years from moving in. Problem solved.

Some people think they are nice, and liberal, and mean well, except when they expand like a blob into minority areas of Boston.

They are the agents of displacement.

It happened in JP and the South End before that. It is happening in Roxbury now. Just wait until Ruthven Street and Elm Hill Avenue are "discovered".

You don't think that the owners of all those subsidized buildings facing Franklin Park along Seaver Street are salivating about condo conversion once their 30 year federal affordable mortgages expire? Think again.

Would you argue that the

Would you argue that the South End was better when it was full of boarded up buildings back in the 1970s and unsafe to walk around at night?

Gentrification is a legitimate issue, but your solution is not a solution.

I've always said the places that could easily handle 40 story residential towers owing to access to restaurants, public transportation, and jobs is the north side of Boylston Street and Harvard Square, but you couldn't dare build there, you know shadows and things (and snobbery).

That would solve some housing issues.

You want to prevent people from buying houses in neighborhoods not approved for them?

Isn't this how the whole red lining mess started?

What alternative is there to the current market situation? Building more public transit to ease commutes further out and level the playing field across metropolitan areas would be a start, but I'm interested in what else people can come up with aside from vague notions of assigned seats.

Something else to consider: a lot of "gentrification" in the modern era proceeds from estate sales - the former owners are dead, the heirs don't want the property. What sorts of things can be done with the probate process to change court-ordered cash sales to settle estates that often lead to flipping?

I want more housing in town. I want 1960's era housing projects with acres of parking made into mixed income housing.

Housing got to expensive for some (like me) in the South End. Where did people move? The "Polish Triangle" and Ashmont Hill. I see it starting to happen more and more in Roxbury.

The problem with increased gentrification is also that it makes places in Malden, Randolph, Quincy, and Lynn more expense. If people from Roxbury, South Boston and Dorchester have to move because the rent is too damn high, where do they go? Greenfield?

More towers in Boston and Cambridge and the state should force the biggest bad faith actor of them all; Brookline to allow building up. A single family lot or development right for a unit in Brookline is now at between $800,000 and $1.4M. That is market forces coupled with restrictive zoning making living there out of the reach of many but the top 10%.

Homogeneous white liberals from Ohio is what give Boston it’s character. Noted.

With all respect, what would you suggest, John?

Churches are more "useful" than a dead bank branch. They provide community, solidarity, sense of place and purpose. The neoliberal attitude that always pushes to replace our sacred spaces with expensive condos and commercial retail hollows out our communities.

An empty building is no good, but I'm sure one of the many minority population storefront churches around with a more liturgical bent would love to occupy this space.

Churches in the area are being turned into condos for a many reasons having nothing to do with neoliberal anything whatsoever:

1. the Catholic Church was made to pay for their sins against children in the courts and had to sell several properties
2. declining attendance and lack of parishioners
3. older buildings are very difficult and expensive to maintain

In my own community, churches that were renting space in schools and wide open industrial buildings have moved into larger churches that were not faring well. The local UCC congregation downsized to a storefront after they could no longer maintain their building, and sold the building to a Haitian Evangelical Congregation.

As to 1, sure but this is not Catholic-specific, many of the conversions are in old mainline Protestant buildings, and the relevant church in question here was African Orthodox (fascinating history in its own right).
On 2, the decline in attendance and lack of parishioners is in fact directly attributable to the neoliberal attitude I cited, and there’s more and more being written about this trend every day. And of course this is also fairly irrelevant, as you can preserve spaces without the same number of regular parishioners (as the Church of England does) or find creative ways to help underserved populations use the space.
3. Yes of course, but this is non-responsive. In fact, your whole post fails to address the main thrust of my original post, which is that these spaces have a “utility” that goes above and beyond mere monetary profit. Expensive to maintain, yes. Vital to our history and culture, yes! And not just as museum pieces, but ready to adapt to new traditions. Maybe we can find ways as a society to help our brothers and sisters maintain clean and reverent worship spaces while we preserve the best of what our forebears left us.

This is to say nothing of the aesthetic crimes perpetrated on some of our city’s most beautiful spaces by the condo conversions - but that’s been covered amply elsewhere.

I actually live on Hawthorne St and I am friendly enough with the Executive Director at HBI to ask her about this. There are a handful of storefront churches in or near Fort Hill that might benefit from moving to a renovated old church, and the neighborhood might benefit from having those storefronts turned into something else.

Possible win-win, right? Maybe, but we can't even discuss it on its merits because the tax credits that drive these historical developments preclude any religious use. Which is fine in the abstract, because of separation of church and state and all. I don't really want our tax dollars going to fix up all kinds of buildings that are currently in use by a variety of religious organizations.

But still. Sometimes I wish there were exceptions for common sense. Because here we have a glorious old church, and old churches are really only good for one thing...being churches. And instead we're going to spend millions of dollars rehabbing it, and then try to shoehorn something else into the space.

The kind of project that

The kind of project that should sail through permitting but instead will likely be held up by NIMBY neighbors and elected officials afraid of their own shadows.

A developer proposed tearing down the church altogether and putting up 30 apartments. The neighborhood protested and HBI stepped in and came up with a plan that preserves the historic church building and adds a smaller number of housing units behind it.

...that even at the virtual public meeting that HBI held a few weeks ago, the vast majority of comments were NIMBY types who were taking HBI to task as if they were the original developer, not the friendly non-profit that literally saved the church from demolition.

It was disgusting. They were attacking HBI over everything. 100% affordability? Not affordable enough. The design? Too modern for our precious old neighborhood. The lack of an identified plan for the church even though no one has a use for it and old churches are notoriously bad gambles to renovate and we're in the midst of a global pandemic? Clearly HBI's fault. And so on. No one seemed to remember that had it not been for HBI, the church wouldn't exist anymore.

Fortunately, Covid has forced us into virtual public meetings where those of us who support this kind of project but abhor the NIMBY crowd can attend and vote without subjecting ourselves to the public meeting process. And even though the people who hogged the phone were against the project, a sizable majority of people who voted were for it.

Madison Avenue classic idealistic marketing at it's finest. Notice both men in both skin colors still showing dominance over their woman with their arm resting on the women's slight shoulders. The women again as usual carrying the burden. Come on make it real. Make the women happy.

Court orders new trial for one of two men convicted for the death of Dawnn Jaffier, shot in the head as she waited for a parade to start on Blue Hill Avenue in 2014
Devilish look in Franklin Park
Columbus Avenue in Roxbury getting trolley-like bus stops
Man gets two years for role in Roxbury chapter of Latin Kings gang
Man was hanging out in a Grove Hall parking lot with a gun loaded with 21 rounds, police say
Election roundup: BPS teacher makes bid in Campbell's council district