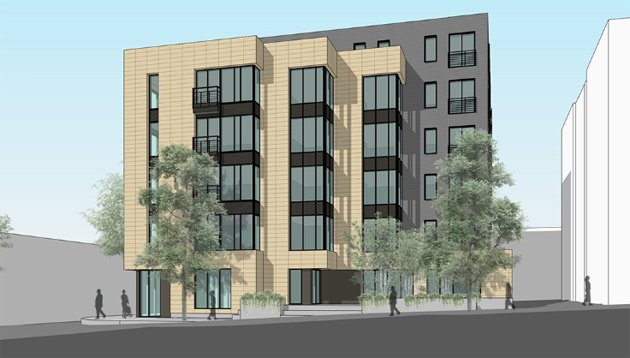 A developer based in Bay Village has proposed replacing the block that now houses Dragon Chef, Bob's Pita Market, Delicious Yogurt and a performance space with a six-story, 39-unit residential building on Washington Street in Roslindale Square, between the Roslindale Community Center/RMV and Basile Street.

In plans filed today, Arx Urban, a "socially minded" and "generationally focused" developer, said the new building would include both ground-floor retail space and "a community theater space," in the basement, which it says it expects to lease to CSZ Boston, which uses the rear of the current building for its Rozzie Square Theater - where it held improv comedy shows in the before times and hopes to again.

Arx says at least five of the units will be rented or sold as affordable, and that it is trying to secure state and city subsidies to increase the number of affordalbe units. The company notes that only about 12% of the units in Roslindale are now considered affordable, compared to 19% citywide. The units in the building would range from studios to two-bedrooms.

Arx is proposing space for 47 bicycles, but no parking spaces - although it says it has begun negotiating with nearby property owners to provide parking if needed. It notes that Washington Square has a dedicated morning bus/bike lane to Forest Hills.

Unlike the theater space, Arx does not specify who would rent the new building's rental space.

By removing the existing structure, the proposed Project will have the opportunity to reformat the retail layouts to better cater to the needs of existing and future tenants and blend into the existing mixed-use fabric within the Community Commercial zoned district.

The proposal is the latest in recent years to slowly transform Roslindale Square. Completed projects include the renovation of the old trolley substation into a beer garden, with apartments wrapped around it, and the addition of two floors of apartment above the building where Chilacates is now. Wallpaper City is having two residential floors added, there's a similar proposal for another low-rise building a couple doors down Poplar from that. Condos went in at the rear of the Taft Hill municipal lot and another developer wants to put up more condos on the other side of the parking lot, next to the Greater Roslindale Medical and Dental Center.

Plans and info on public meetings.

Another development, bringing needed density to the area. This would also make the disparity even clearer between Boston and everywhere else: in any other major U.S. city, the demographics around Roslindale Square would have warranted a subway extension many years ago...

Coming back to reality: when will the T finally re-zone Roslindale Village to 1A? (In other words, when will our useless city councilors -- especially the one living nearby and running for mayor -- start explicitly advocating for this change?) Lynn has done it for their Zone 2 station, the equivalent of Needham Heights, so why can't Boston?

Wu has been a staunch

Wu has been a staunch advocate for change for the T. At least she is one of the very few polls that takes it everyday (pre covid) and understands the constant frustrations that daily riders deal with.

Michelle Wu has been

Michelle Wu has been advocating for Roslindale (and all Commuter Rail stations within Boston) to be rezoned as 1A for years: https://commonwealthmagazine.org/opinion/mbtas-unfair-rail-fares-need-to...

Not that it's not warranted here...

in any other major U.S. city, the demographics around Roslindale Square would have warranted a subway extension many years ago...

Not that it isn't warranted...but are there, in fact, any other major U.S. cities that are currently extending their subways?

quite impressively, considering that they restarted from zero in the 1980s.

LA is currently building out their subway system, and I believe Austin just approved transit expansion. Several other cities were working on expanding their light rail systems before the trump admin put a halt to pretty much everything. Also, aren’t we currently expanding the green line?

Minneapolis and Atlanta come to mind.

I think DC is planning on

I think DC is planning on extending to Dulles, but I'm unaware if that's actually happening.

They need to move all Boston

They need to move all Boston commuter rail stations to 1. Readville and HP are also 2.

The current commuter rail structure, according to the MBTA's website, is the following:

Not that big of a difference...

Someone who can afford to pay more than double the price of a bus/subway/1A pass for the privilege of avoiding Forest Hills and the 32 bus is unlikely to be concerned about a mere $18/month.

I thought that Fairmont was 1

I thought that Fairmont was 1 and HP is 2.

It is a lot more of

It is a lot more of difference from Zone 1a, the price of a subway pass and zone 2. I live in the 1800 block of HP and that difference is too much for me to carry.

What would happen to Bob’s

What would happen to Bob’s pita? They moved there not long ago from another location in the square.

I shop there regularly. I

I shop there regularly. I would be sad to see them go. I really hope the landlord helps them find another space in the square. The old uniform and short lived petco place has been vacant forever. Anyone know what the deal is there?

Petco signed a long term lease so they're still paying for the space despite shutting down the store. So the LL has zero incentive to get somebody in there. This is 100% why a commercial vacancy tax is needed in this city.

Glad there will be no parking - that street is a disaster twice daily anyways due to bus service to the school.

In related news, it's neat to see the upper floors on Wallpaper City take form.

Does this project require any variances? I assume maybe height?

I reckon that will finish Bob

I reckon that will finish Bob’s Pita off. That is NOT a good thing. Can Main Streets do something? I dislike the fact that Roslindale is full of great little stores but ppl choose to shop at the farmers market instead.

This headline is misleading...

The developer is not blindsiding the retailers and has said they will assist the tenants in either moving in the square or moving into the new building...including building out space for the yogurt store and theatre. This developer has done a great job on other progressive developments throughout the city. They work with communities to increase affordability in projects and have piloted several anti-displacement programs to increase affordability in areas that are changing quickly.

Some folks shop at the farmers market *AND* support local stores. Imagine that!

That said, I hope Bob's Pita will be able to live on. I love their spinach pies.

Not good enough. I wd rather

Not good enough. I wd rather give my money to someone invested in the square than some guy from Hopkinton or whatever imaginary place they come from.

What's your specific complaint here? Not enough people shop at Bobs/Village/International Market during the week because they're waiting for the Farmers Market? They always seem busy to me.

39 units and no parking, what

39 units and no parking, what could possibly go wrong?

Not that I’m trying to figure out where you live, but now I know you don’t live on Basile Street. Mandating 2 spots per unit would be overkill, but thinking that none of the new residents will have cars is lunacy.

Also, I feel for all the current tenants.

They built the apartments above Tony's without any parking and it's fine.

True about the current tenants. I hope Bob's finds a new home in the square.

You they have no residential abutters, along with abutting a commercial parking lot (where a deal could be reached on usage.) This is roughly 10 times the units bordered by a bus lane and a residential street.

Fugly addition to the

Fugly addition to the neighborhood. Another missed opportunity to design something to lift people's spirits.

Things are shaping up really nicely in Roslindale when it comes to replacing these outdated single story buildings with new mixed-use, 3-4 story buildings. Good work by organizers in the community who have been laying the groundwork for this stuff for the past few years. The NIMBY contingent there is small but vocal, and they've been outworked for the most part by residents who support growth and density. Quiet success story.

Sounds great! Now just come up w/ a different design. I am sick of these no imagination boxed buildings.

Aside from issues of where existing tenants are going, I think this is a nice looking building and I’m on board with no on-site parking. I hope that’s brick on the front facade.

I really hope it gets built like the rendering.

Boxy and institutional. Come on architects -- do better!

If you care about your any

If you care about your any unique charactieristics which set your neighborhood apart from others, small mom and pop shops and local restaurants you'll quickly be branded an elitist. Nothing stands in the way of the wrecking ball per the pitchfork-wielding pro-density, anti-NIMBY mob.

Give me a break. This is the hub of the neighborhood's commercial district and transit access. If density belongs anywhere, this is it. And have you considered that increased density around the square might, you know, be good for all those local mom and pops?

I think the rental market and condo market is flooded in the area. Prices have gone down since COVID-19. The developer should get ready to revise the financial plan. Oh, and no parking big selling point. The noise from Washington St. is loud, another good selling point. Roslindale residents need to fight this monstrosity. Amen

Man charged for attempted car break-ins in Roslindale; police say he tried to use a passport stolen in an earlier break-in as ID
American Legion Highway between Franklin Hill and Canterbury remains a tire-destroying menace
Court says FBI documents shared with local investigators become 'public records' in Massachusetts
Sartre's sequel to 'No Exit' is less well known today
At least one shot on Aldrich Street in Roslindale
The planets aligned over Roslindale