In case you wonder where all the guns come from 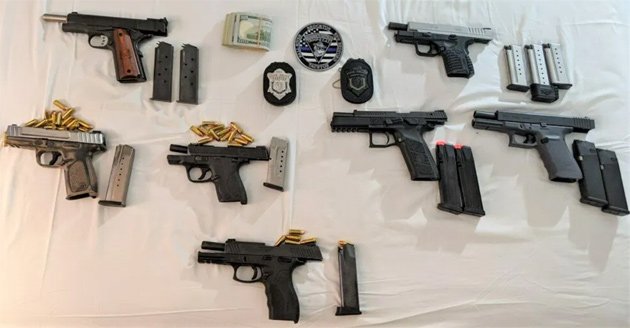 All the seized guns and bullets. Photo by State Police.

State Police report that what started as a traffic stop outside a Raynham motel yesterday evening ended with the seizure of seven guns, more than enough ammo to end numerous lives, some premium pharmaceuticals and a nice wad of bills.

Oh, both out-of-state men, one from Michigan, the other from Florida, were arrested on a variety of charges, which only multiplied after one of them let troopers search their room at the Quality Inn:

After being advised of his rights, ASHCRAFT freely consented to allow Troopers to search his rented motel room, Room 101. ASHCRAFT, in whose name the room was rented, also acknowledged that there were more firearms in the room, that he and BAIER had transported the firearms to Massachusetts from Florida to sell them, and that neither of them had a license to carry or Firearms Identification Card in Massachusetts.

State Police say the action started around 6:40 p.m. when a trooper noticed Donald Ashcraft, 37, of Clio, MI, on his phone while his car was moving and went over to have a chat since, at least in Massachusetts, that's now illegal. Ashcraft then admitted he didn't have a license, so he was ordered out of the car to be arrested for driving without one.

As Trooper Kelley was escorting ASHCRAFT from the rented 2020 Hyundai Elantra, Trooper Pacheco observed a single round of ammunition under where the driver had been sitting. Upon further investigation, the Troopers determined that the passenger, CRAIG C. BAIER, 39, of Bradenton, Fla., was also in possession of ammunition. During subsequent conversation with ASHCRAFT, he admitted there was a firearm in the glovebox. Troopers then searched the glovebox and located a loaded, semi-automatic Taurus 9mm handgun with a 17-round feeding device containing 12 rounds. Troopers located several additional 9mm rounds in BAIER’s pocket and, in the driver’s side door, two pills believed to be Adderall, six pills believed to be Xanax, and a suboxone strip.

The State Police Gang Unit arrived and, State Police say, Ashcraft agreed to let them search their room, where they then found six more guns, several with high-capacity feeding devices, lots of bullets and $4,167 in cash, which State Police seized as possible illicit profits from the illegal sale and trafficking of firearms. The State police gun and crime-scene units were requested to secure the scene.

Both men were taken down to the Middleboro barracks, where both were charged for unlawful possession of a firearm, multiple counts of possession of a large-capacity feeding device and improper storage of a firearm. Ashcraft was also charged with violation of the Massachusetts hands-free law, driving without a license and possession of Class B and E drugs.

Both were held in lieu of $50,000 bail pending their arraignment today in Taunton District Court, police say.

Lock 'em up, throw away the key.

The gun manufacturers and sellers?

Right after you lock up the

Right after you lock up the cutlery companies, baseball bat companies, pharmaceutical companies, car companies, breweries and distilleries for the criminal misuse of their products resulting in deaths?

Everything else you have listed has a primary use that is not killing something else. Funny that.

I would happily trade every

I would happily trade every gun in this city for every item you just mentioned.

Starting with - you need a registration to own one that can be checked by law enforcement officials statewide and nationally, and if you sell it, you need to file the paperwork as such to have the title transferred over to the new owner. Let's also require insurance to use them that holds you liable if they get misused and cause injury or harm, even if that misuse and harm is done by someone else. And while we're at it, how about requiring regular inspection to ensure that you still own the gun you claim is in your possession, and it's kept in good order? Shouldn't be a problem for all those responsible gun owners out there.

starting with - you need a registration to own one

You do not need a registration to own a car.

Not unless you're planning on

Not unless you're planning on using it as a car...

Were they actually that stupid?

I mean, these guys deserve what they got 100%, stupid enough to traffic firearms.

But were they ALSO so stupid as to just consent to all of these searches willingly???

"Sure officer, c'mon into my hotel gun suite and have a look around! Don't forget the glovebox in the car outside!"

Not how it went down, my guess

When the police report says that the suspect consented to a search, it probably wasn’t a polite request, and there was probably some coercion involved. As in, “sure, we can go get a warrant, but then we’ll break down the door, beat the shit out of you, shoot your dog, etc. so you’d be better off letting us in now.”

Also courts have found that it is OK for cops to lie to obtain evidence, consent, confessions etc.

I imagine it takes a lot of composure and balls of steel to say, “no, I do not consent to a search,” and stick to it.

This has to be one of the

This has to be one of the greatest comments at spinning the facts that I have ever read on UHub. 7 illegal guns are off the streets along with two felons and you come back with that response? Bravo.

I am not sure what point you are making nor how it relates to my comment, which was merely to point out that suspects who consent to a search don’t generally do so because they are idiots, but for other reasons.

they're not mutually exclusive

It's easy to say "told you so" when you're on the side of already knowing the outcome, but that doesn't necessarily dismiss the point.

Alternative theory: these two guys probably have plenty of experience with prison, knew they were dead-to-rights, and decided fighting about it wasn't worth the trouble.

Years ago, I watched a series of videos about why one should not (or should) talk to the police. The up side for talking to the police is that come plea time, cooperation is taken into account.

I mean, the cops could have gone to court and gotten a warrant, so the end result would be the same, just with less work.

You spelled 'freedoms' wrong in that headline. Should read 'where do our freedoms come from'

What anti-gun nut liberals don't realize is that if citizens aren't allowed to carry arms, we run the risk of a socialist totalitarian government kidnapping our freedom loving fellow citizens right off the streets. Without person gun ownership, the state security forces like the police will practice unchecked violence on anyone who seeks to reign them in. Thanks to guns not only do we not have to worry about those problems but every time someone attempts to commit mass murder, a local steely-eyed hero is able to quickly neutralize that threat, saving countless women and children and other lesser humans by coolly gunning down the person* about to commit the crime.

* almost always a white guy, apologies to Roadman for hurting his feelings with racism.
** excepting voting rights, environmental rights, equality of opportunity, freedom of religion, reproductive rights, cost of medical care and other piddling stuff no true American cares about.

Quiet, troll. No one was talking about legally-owned firearms.

And now, somebody is talking about that

While you're at it, you could spend some time figuring out what trolling is. Hint: it isn't just saying things you disagree with.

I used to believe that the

I used to believe that the second amendment could protect us from a totalitarian take over. But I don't see any freedom fighters in the streets of Portland or New York, protecting people from being grabbed by storm troopers and thrown into unmarked vans without any due process. I don't see freedom fighters protecting black people from being murdered in broad daylight by cops, nor speaking up for the rights of black people to own and carry guns that they have a licence to carry. So, now I don't believe that any more.

In other words, put up or shut up.

How'd they rent the car if he didn't have a driver's license?

Only one of them didn't have a license

Maybe the other guy rented the car?

Prisoner A: "Dude, What are you in for?"

Prisoner B; "Dude. Gun dealing & drugs. Oh, plus talking on my cell phone"

Ashcraft was also charged with violation of the Massachusetts hands-free law,

Oh, plus talking on my cell

Oh, plus talking on my cell phone

And they all moved away from me on the Group W bench...

What's up with the badges in

What's up with the badges in the picture? Were they trying to pass themselves as some type of law enforcement officers?

Those are the badges of the

Arresting units, not the criminals.

Me thinks it just MSP

Me thinks it just MSP branding done by the Media Relations folks for the photo.

The badges are both MSP and the patch is Troop D CAT (Community Action Team). I'm certain that if these accused criminals were in possession of MSP credentials of any sort, they would have indicated it in their press release.

Let's not forget whoever sold

Let's not forget whoever sold them these guns in Florida. They culpable as well.