Baker tightens restrictions on businesses and gatherings as number of hospitalized Covid-19 patients rises above 2,000 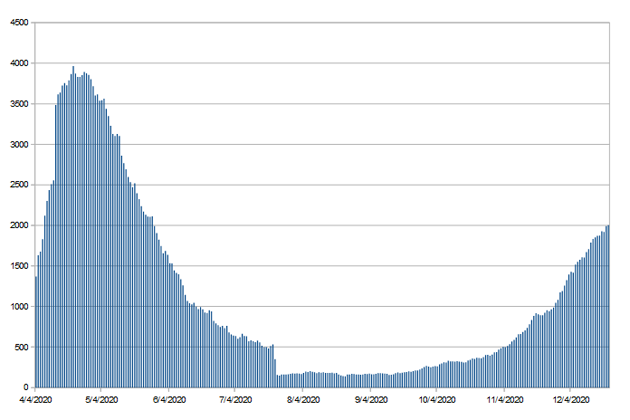 Gov. Baker today announced new restrictions on indoor gatherings that limit occupancy for restaurants and other businesses and houses of worship to just 25% of their Before Time maximums, down from the 40% allowed previously.

The restrictions run at least through Jan. 10, as do new limits of 10 people at indoor events and 25 people at outdoor events, Baker said at a press conference.

Public schools are exempt from the new restrictions, as are facilities that provide "critical services," such as public-health and public-safety services, as well as some sectors that include manufacturing, construction and laboratories.

Baker, who has pleaded with residents to just stay home for Christmas, said he would consider whether to extend the restrictions beyond Jan. 10 based on several factors, including hospitalization rates.

Several hours after he spoke, the state Department of Public Health released its daily Covid-19 stats, which showed 2,004 people hospitalized in Massachusetts due to Covid-19, the first time the state has seen that many people hospitalized with the virus since May 27, as the spring surge was subsiding.

In the Boston area, hospitals now report 81% of their beds in total are filled, down from 91% late last week.

The state figures showed a daily test positivity rate of 7.48% for non-college testing, down from 8.09% a few days higher, but still way higher than the 1.66% recorded in early September.

...for the surge we all saw coming 7 weeks ago!

Also, restrictions go in effect the day after Christmas as he is urging people not to gather for Christmas. More mixed messaging. On December 1 The Herald reported:

Massachusetts epidemiologists have identified 36 clusters tied to places of worship since the onset of the pandemic, Baker said.

I've been looking on Waze at traffic around malls right now.. its um. Busy. You'd never know there was a pandemic going on right now.

What happened for the sudden

What happened for the sudden change around 7/20? Did they just kick people out of the hospitals?

I think that was explained a

I think that was explained a while back - some sort of change in reporting? I'll see if I can find a source.

Footnote on the Mass.gov

I wish they would also

I wish they would also publish the number of suspected COVID hospitalizations after that date (maybe they do somewhere and I'm just missing it). It would be nice to be able to compare apples to apples and see where we are relative to the Spring.

"Suspected" covid cases or not, absolute ICU bed occupancy rates provide a reasonable metric for comparative impact between surges. It's a metric for another practical concern as well: "how bad off will I be if I get in a car crash tomorrow and need advanced medical care".

Is our Governor afraid of

Is our Governor afraid of mentioning the MBTA? Just cause he doesn't ride it every day and face slob degenerate riders must mean it's beneath his dignitary status.

Front line workers can continue to risk your lives daily at the Boston Public Health Commissions Transitions Program, yet be penalized for being late All struggling with child care, elder care and lack of transportation.Why are certain classes of people more important than others?

I'm sorry, and thanks for

I'm sorry, and thanks for your work. Too bad the only front lines your managers at the BPHC will be at are for the vaccines.

I passed through Copley Place Mall to get to my eye doctor yesterday. I was surprised the place was so busy. There were some big lines to get into stores like Moncler or Gucci. I guess that's because of the limits on the number of people in the store itself. It was still people gathering while waiting to get into the store. Ugh.

I didn't see lines at the Pru but it was still pretty crowded there too, compared to what I expected.

The Pru on Monday

I walked through the Pru at around noon on Monday and it was more crowded than I’ve seen since restrictions began. There was a line to get in to Canada Goose-which was also the case the previous Wednesday. The other line I saw on Monday was outside the small Lindt store on Boylston.

You are most likely already too stupid to understand basic viral transmission. You get what you deserve.

Your rich enough to have great health care coverage and can buy connections to good doctors if needed. They figure in the off chance they get the virus and need care, it would not be a problem to get the best possible including any critical medicine. So like Trump, they'll be fine.