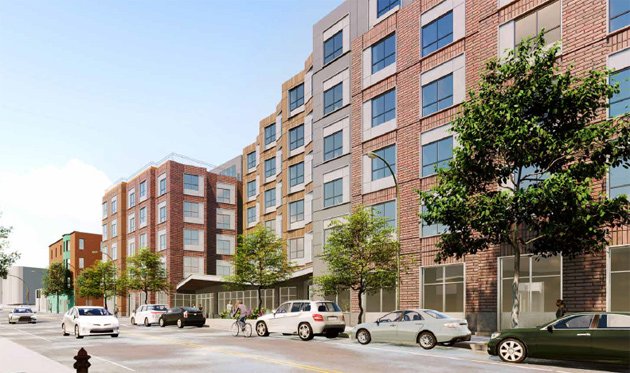 The Zoning Board of Appeal today approved plans by the Pine Street Inn and the Community Builders to build apartments for Pine Street Inn clients and for low and moderate-income residents at 3368 Washington St. in Jamaica Plain, where Pine Street Inn now has a warehouse with some office space.

The only opposition came from the owner of a building across the street now leased to a brewery.

Pine Street Inn will get 140 units of "supportive housing" - studios of about 320 square feet for formerly homeless clients, along with office and meeting space for use by Pine Street counselors, who will work with both residents and other clients in the community. The building will have a number of community rooms and a deck, and residents will be encouraged to use them rather than simply staying in their apartments for prolonged periods.

The building will have 38 parking spaces; 18 for Pine Street Inn counselors and workers. the rest for tenants.

The mayor's office and the offices of city councilors Matt O'Malley, Annissa Essaibi George and Michael Flaherty all supported the proposal - as did the owner of the neighboring BMS Paper.

But Cynthia Snow, a lawyer representing Monty Gold, who owns the building that houses Turtle Swamp Brewing across the street, said the proposal violates city zoning and urged the board to reject it.

Although Snow said "there no stated basis for the size of this construction," she said her client's main opposition is to the lack of visitor parking. She said this will force visitors to park on the street - creating unfair competition for Turtle Swamp's 21 employees, who already have to park in the street.

The board approved the project unanimously.

Want to note that there would

Want to note that there would be more housing for the homeless here if NIMBY abutters in JP didn't show up to the meetings and demand a smaller project. The Pine Street lopped a story and some units offs as a result. I would humbly suggest the City should not listen to such people when we're talking about housing the homeless.

If it weren't for the parking

If it weren't for the parking this would be totally great for the business, am I right?

Even with the parking

I think this is going to be totally great for the business. I said this below, but I don't think they're super reliant on parking as a business in a super walkable neighborhood and close to the T.

A lot (all?) of the Turtle Swamp employees live in the neighborhood and can easily walk/bike to work there. I suspect this is more likely the landlord who's concerned about his ability to easily park...

Not his first time

Monty Gold is the same schmuck who took three years to rebuild Restaurant Row in the Fenway.

What a lowlife. I'm glad the ZBA approved this.

So the owner of the building

So the owner of the building which Turtle Swamp brewery rents is claiming that they have 21 employees who park on the street? Shouldn't street parking be kept open for customers (i.e. "visitors") rather than employees?

I don't think his logic is all there

I've only been to Turtle Swamp a handful of times, but I don't think they've ever had 21 employees all working at the same time, and they have a few parking spaces on their property that I've never seen used. I don't think that parking is really a huge concern for them (and if it was, you'd think they'd be the ones to bring it up, not the landlord)

Do the actual employees of

Do the actual employees of Turtle Swamp have a problem with this or is it just the scumbag landlord worried that his property value will go down?

I don’t know about the

I don’t know about the employees, but the Turtle Swamp owners are opposed to this project too. They’re worried about the future of their business and then oppose housing homeless people? I’m sure people are going to flock there now.

TBH they should’ve named their company something other than Turtle Swamp if they were concerned about turning off potential customers. I hear ‘Turtle Swamp’ and it sounds like one of the last places I’d want to go and have a beer. And I love beer, but all I can think of is slimy, salmonella-filled turtle tank water.

One of many reasons JP is

One of many reasons JP is great: fewer scumbag nimbys than in Roslindale and West Roxbury who try to keep poor people and minorities out.

Not so much. JP NIMBYs

Not so much. JP NIMBYs demanded a smaller project at the meetings. They don’t care about the homeless as much as they do “the character of the neighborhood.”

A JP gentrifier weighing in with hot takes as usual.

Currently they're about the same in terms of diversity as Roslindale has become more diverse and JP (wait for it) has become less. Let me guess- you're a white person who's moved to JP between 2000 and 2015? Well done then.

Different areas of JP there are

You know that there isn’t just one monolithic JP neighborhood? They put this kind of thing in certain JP neighborhoods and not others. I wd love to see this Pondside. Most of the social justice warriors who want this next door over there will be gone in 18 mos.

Math with your old friend Will!

"there (sic) no stated basis for the size of this construction,"

The story tells us there's 140 proposed units of "supportive housing", plus 62 additional units. Let's simply assume one person is to occupy each unit. This gives us 202.

From this item about Boston's Homeless Census (https://www.boston.gov/news/city-boston-holds-39th-annual-homeless-census)

The night the 2018 Annual Homeless Census was conducted, 1,779 individuals were using Boston's Emergency Shelter system, compared to 1,762 in 2017.

Now, I only got a 640 in math on my SAT's in 2002 instead of the full 800 points, but last time I checked, 1,779 is a greater number than 202. This project isn't big enough to house every Bostonian living in the street, yet someone with no fewer than two college degrees stood up in front of other people and said "There's no stated basis for the size of this construction."

Either this witch should be disbarred, or Mr. Gold is so rotten, he sent his counsel to spew this reductive garbage on his behalf. How does anyone live in Boston for more than five minutes and conclude that people who live here are stupid enough to believe such rhetoric?

Guess I'm never drinking a Turtle Swamp beer, whatever the (expletive) that is. And if I worked there, and someone told me the reason I had to walk another two (hell, five) blocks to work was because someone got a place to live, I would be happy for the newly housed Bostonian, not rueful over some extra exercise.

Also, pretty sure that the city's planning process had a building of this size here. The NIMBYs have kept the plan from becoming zoning, but it was certainly intended to be. So lots of public process and math behind a building this size on the site.

This project has been in the

This project has been in the works forever, so Monty Gold has had plenty of time to voice objections if he had any legit ones. Glad it's finally approved.

Police arrest Jamaica Plain man on drug charges; say he had a pound of cocaine and more than $260,000 at his Armstrong Street home
Guy tases somebody who asked him to put on a mask on a bus at Forest Hills, police say
You think he has a pair of spats on under the water?
Good start to the day in Jamaica Plain
Feathered faceoff at Leverett Pond
Gunfire on South Huntington Avenue in Jamaica Plain