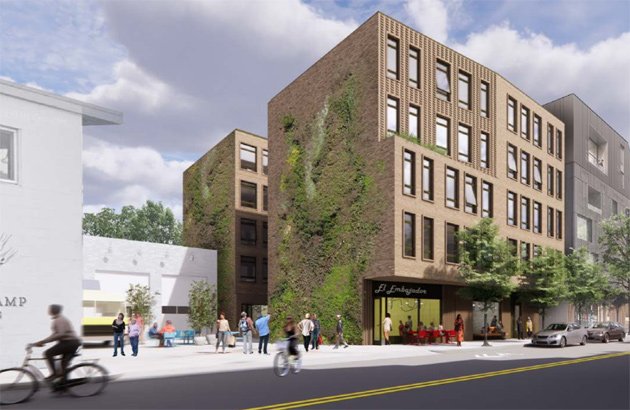 The Jamaica Plain Neighborhood Development Corp. today filed plans for a five-story, 39-unit apartment building for low- and extremely low-income senior citizens at 3371 Washington St., at Green Street and right next to the Turtle Swamp brewery, whose landlord is now suing to block a proposal by the Pine Street Inn for low-income apartments across the street.

In addition to apartments - 38 for seniors and 1 for a live-in manager - the proposed building would have ground-floor space set aside for El Embjador restaurant, which would otherwise be displaced by the new building.

The units would be built under the city's "compact" development guidelines, which means they would be smaller than normally required and which mean that JPNDC is proposing a series of community spaces in the building for residents to share, including window-facing "sitting niches" on each floor and a community room and courtyard on the first floor.

JPNDC will seek city permission to exceed the streets 55-foot-high maximum by 20 inches; it says that at just four floors, the building would not be financially feasible.

The building would have no parking spaces. Insufficient parking at the larger Pine Street building across the street is Turtle Swamp landlord Monty Gold's stated reason for opposing that project - he says that building doesn't have enough parking and so residents and visitors would clog the parking spaces that his tenant now relies on.

The development presents as a place where non drivers will

live. The employees servicing the residents will need parking. I expect various forms or personal transportation to include chair cars and "the Ride" needing access to park. The already treacherous crossings at Glen and Forest Hills and Washington, Glen and Green will become more risky with the potential for more double parkers. Not that the BPD ever double parks there....

There is a bus stop outside

There is a bus stop outside and a T stop a block away. Walking and biking are also ways for employees to get there.

Also, the back of the building is accessible by taking the alley next to where the Somali Devlopment Center used to be (I think it's the same building as Metro Lacrosse). The Ride & shuttle drivers could use it. If they design it right, Washington Street should see very little traffic change.

Its all about parking

Their complaint could be reasonable, but current parking policy pushes them to make unreasonable demands.

If the City of Boston wants to develop like a city and allow developers to do so, it needs to come up with performance (paid) parking system to better utilize public streets.

Coronavirus aside, strength of cities comes from density and this can be compounded by citizens spending less resources on personal vehicles (and more on everything else). The absence of better parking policy pushes developments to devote resources (time/money/lobbying) towards a more suburban model, just without the cheap land - worst of both worlds.

...unless your rich (and connected) I guess.

Until then, get used to complaints like this - some are more reasonable than others, but they could become more irrelevant with better parking policy.

you're never going to get any changes made to the parking policy, because of those same parking complaints. Anything that reduces parking capacity in any way has to be fought for tooth and nail, despite any number of studies showing that it will make streets safer, cleaner, easier for humans to move around on, etc.

Its very hard to make the leap from "free", particularly city wide. I think it could be done in targeted key locations - but a thoughtfully designed transition period (or grandfathering) would need to be built in for people who would otherwise be displaced.

It would require political will just isn't quite there yet. Development today solves this problem through larger (and more costly) projects that more closely resemble suburbia.

If that is the path of least resistance, so be it I guess.

and will continue to prefer it over public transportation as long as we have a crappy transit system. Unless the City and State invest heavily in serious upgrades and additional service people will logically continue to prefer to drive. And since rich people, like Walsh and Trump Lite (Baker), don’t take the T, I doubt we will ever have a first class public transit system here. Or even a second class one. Better get used to having no place to park, because it’s only gonna get worse, guaranteed.

And there are plenty of places that people who like to drive can live even less expensively than living in the city.

Balancing trade-offs is part and parcel about making grown up decisions about where to live.

Lower property taxes and the

Gas tax is way too low as are parking permit fees, but the number of residents in gentrifying Boston in 5-10 years who are driving electric cars is only going up, decreasing that revenue. If you add in a further decrease in an optimistic future where fewer of residents own cars, revenue shrinks farther. Property taxes cant' go lower if we want robust city services, especially if the city starts planning for serious sea level rise mitigation over the next 50 years.*

You just made a case for the city to charge people substantial fees for the privilege of storing their private property on public lands.

Thanks for the acknowledgment

Will the City ramrod this proposal through as fast as the Pine Street Inn, or will it belabor the discussion and prolong holding costs for the NDC like it is doing for an excellent private development at 3368 Washington. The JP Auto Glass project filed in Nov 2019, and held unofficial community meetings ad nauseum for 6 months prior. Yet the City continues to listens to the gripes of a handful of “aggrieved abutters” and will not approve it. It’s so obvious that they are not favored even though they’ll be providing both market and well above the required affordable amount of units to the mix of now 550+ total units for that corner and along Green to Amory. We need a level playing field, and the favoritism will never change at City Hall.

Pine Street Inn has owned the Washington Street property for at least 25 years. They have talked about developing it into residences since the late 1990s. Nothing was expedited or ramrodded through, no one who has lived or worked in that area should be surprised by the proposed housing.

How long has the guy owned his property?

This sounds like the idiots of the NABB (nasty assholes, bullies, and bitches) in the '80s complaining that student residences and frats "devalued" their condo property.

The frats and residences were established about a century before that crop of "yuppies" moved into the city.

Egleston Square farmers market shuts for good
Jamaica Plain kidnapper who contracted, recovered from Covid-19 in prison is denied early release
Man extracted from under Orange Line train at Jackson Square
Contractor unplugs freezer and there goes 1,900 doses of Covid-19 vaccine at the Jamaica Plain VA hospital
Police arrest Jamaica Plain man on drug charges; say he had a pound of cocaine and more than $260,000 at his Armstrong Street home
Guy tases somebody who asked him to put on a mask on a bus at Forest Hills, police say