When Thanksgiving was revolutionary 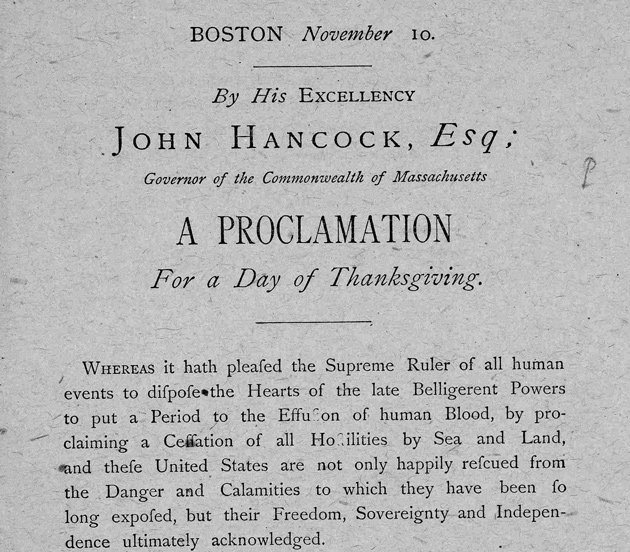 On Nov. 10, 1783, just ten months after British diplomats signed the Treaty of Paris, which recognized an independent United States, Massachusetts Gov. John Hancock issued a proclamation declaring "a day of Thanksgiving" on Dec. 11:

That he hath been pleased to conduct us in Safety through all the Perils and Vicissitudes of the War; that he hath given us Unanimity and Resolution to adhere to our just Rights; that he hath raised up a powerful Ally to assist us in supporting them, and hath so far crowned our united Efforts with Success, that in the Course of the present Year Hostilities have ceased, and we are left in the undisputed Possession of our Liberties and Independence, and of the Fruits of our own Lands, and in the free Participation of the Treasures of the Sea; that he hath prospered the Labour of our Husbandmen with plentiful Harvests; and above all, that he hath been pleased to continue to us the Light of the blessed Gospel, and secure to us, in the fullest Extent, The Rights of Conscience in Faith and Worship.

Also see his 1780 proclamation (one of many such declarations posted by the Library of Congress).

Of course, Thanksgiving days were nothing new in Massachusetts. But even after the Pilgrims had their feast, the colony continued to have days for giving thanks, if with a different tenor before the Revolution - and sometimes not timed to celebrate the harvest.

In 1746, Governour William Shirley proclaimed a publick day of Thanksgiving on Aug. 14, to commemorate the end of the Jacobite rising:

IT having pleased Almighty GOD (after He had in his righteous Providence permitted an unnatural and most wicked Rebellion to break out in North-Britain, and a great Number of deluded People to join therein) to grant unto His Majesty's Arms, under the Conduct of His Royal Highness the Duke of Cumberland, a remarkable victory over the Rebels, and thereby blasted the Designs of the Enemies of the Protestant Religion and our Civil Liberties to introduce Popery and Tyranny into our Nations and to give us a happy Prospect of an entire Suppression of the said Rebellion.

By 1761, though, things were back to normal and governors were once again issuing harvest-based proclamations.

For sharing this interesting bit of history.

Also, for all your work on UniversalHub, part of my daily essential reading!

For the kind words!

We may not have many horse-drawn wagons on our streets anymore, but our hydrants still look the same
Some levels at Alewife parking garage to re-open Wednesday for people who want to take a bus somewhere; Red Line service could resume by Saturday
Boston seeks neighborhood artists to replace all those blue oval welcome signs
Boston gets first two electric school buses
Too cool for school
It's official: Boston to get wicked cold