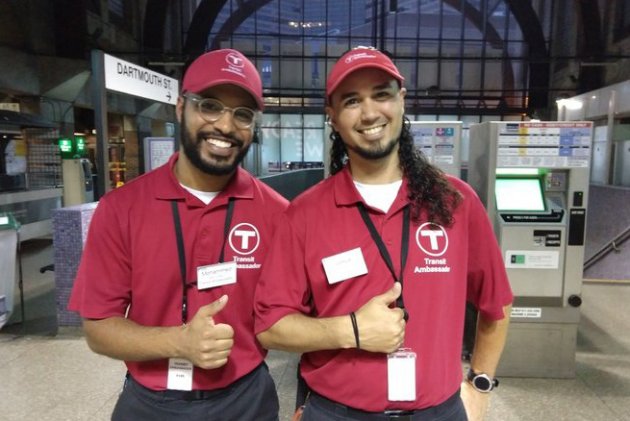 Bad Ideas Inc. puts in a good word for two T "ambassadors" at Back Bay station, named Mohammed (on the left) and Jesus:

My friend and I were adventuring in Boston and discovered *they'd lost their wallet!!*

We retraced to Back Bay and... I'm not making this up... nametags: "Jesus" and "Mohammed" immediately found the wallet

I talk a lot of shit about the MBTA, but the actual workers are awesome

The ambassadors work for a private contractor.

Pun intended...definitely from the “Have you heard the good news?” department!

There not actual MBTA workers

There not actual MBTA workers though, the Red Shirts are non-union contractors who work for Block by Block :http://blockbyblock.com/

If your trying to make a non-union stab, nice try.

As someone worked for a sub contractor for the T. As far as the employees are concern, you are T employees. While your check may come elsewhere and you aren't unionized, you work for the T.

Also, the comment was from a rider, not Adam. Riders do not understand (or even care really) that the red shirt folks do not get paychecks from the T. They wear a T logo'd shirt, can help with the gates or any other issues, and have a badge that is a T badge (although slightly different)... so to riders, they ARE employees

Now as far as your non-union stab... I have many friends at the T who are union members, but you know what? These Red shirt people are far better than the actual unionized employees ever did. Remember the token booths with surly people who acted like you were bothering them?

Yeah I'd rather deal with the Red Shits.

So when you wanna non-union stab, remember, maybe if people were HELPFUL and CAME OUT from behind the booth, and didn't have attitude, maybe they wouldn't have been replaced. Hard to support people who give you attitude. Maybe if they didn't, support would be better.

Don't get me wrong, there's a lot of great T Employees (real ones), but it always seemed like the bad apples worked the booths.

Was he on break?

Moses and Shiva come on shift at 3pm.

Yeah he and Budda were having a smoke

But I hope they weren't vaping.