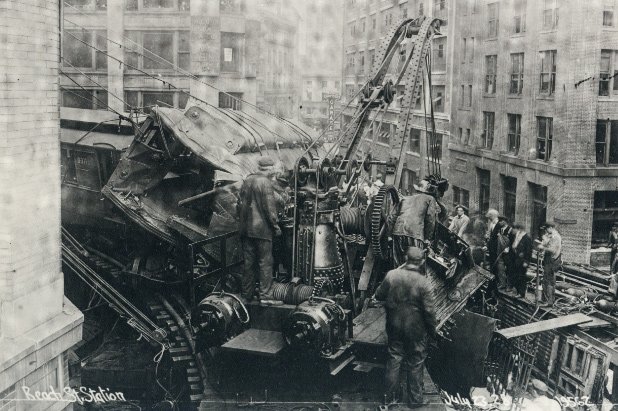 The Boston City Archives has posted some photos of the aftermath of a crash on July 22, 1928 when a four-car elevated train crashed on a sharp curve at Beach Street and Harrison Avenue, killing two and injuring several others.

According to an Associated Press account from the time, the train's speed going into the curve just before the station was estimated at 40 m.p.h., far faster than it should have been going there:

It was scarcely a third of the way around when the trucks of the leading car left the rails and tore zig-zag fashion across the other track to crash into the abandoned Beach Street station.

The second car in which the two men who were killed were riding hurtled its nose into the side of the leading car and then jumped back and half-way across the flat roof of a building at the southerly corner of Beach street and Harrison avenue, carrying away the stone facing of the structure, crushing the walls and dropping its heavy trucks through the trestle. The two rear cars left the tracks but remained upright.

The accident occurred in a heavy rain. As the cars piled across the third rails, a great blue flash was visible for blocks around and the sound, heard clearly in the Lagrange street police station, brought a detail of men to the scene almost before the train had ceased motion.

The train was heading towards what was known as the Atlantic Avenue Loop, a stretch of track that diverged from what later became the Orange Line to travel along the waterfront before meeting back up with the main line near North Station. The loop was abandoned due to declining ridership in 1938 and torn down for scrap during World War II.

The curve, shown in a 1901 photo (from the Boston City Archives):

You can still see an echo of the old tracks at the corner today: There's a single-story building where the elevated used to go.

or, the North - South Connector! Why not rebuild it and re-connect North & South Stations?

Because we can't build

Because we can't build anything that costs less than a billion dollars a mile, so we end up with nothing.

The Biden, shirtwaist and

The elevated curve is visible here in the 1928 Bromley Atlas: (see it on MapJunction: http://mapjunction.com/VIEWER/12800 )

This segment of no-longer-extant T has always fascinated me. Thanks for a couple of great photos I've never seen.

The single story building on the corner is, in fact, Beach Street Station!

It is also one of my very most favorite bakeries in the city. :P

The entrance and turnstiles were located here with a rather narrow staircase leading up to the platform. Beach Street Station closed January 4, 1919 due to low ridership. The Washington Street Tunnel opened November 30, 1908 and from day one most service to/from Dudley and Sullivan was sent via the direct route. Boylston/Essex {i.e. the modern Chinatown Station} with its more service quickly siphoned off Beach Street's ridership. Add to that several streetcar lines running from Beach Street to Jamaica Plain, Southie, Dorchester and other points handling the bulk of short, local riding. In the final months Beach Street averaged about 750 passengers on a typical weekday. {Comparable to non-race day ridership over the years at Suffolk Downs.}

Immediately after this accident the El decided to install speed limit signs on all curves. Amazingly, after nearly 87 years of operation this, the Dudley Street wreck of 1910 and the Forest Hills wreck of 1921 stand out as the only major catastrophes in the history of the elevated.

After Beach Street closed in 1919 several patterns of service still used Atlantic Avenue. The North Station/South Station Shuttle is the most well known. As late as 1935-1936 some rush hour service was run Dudley Terminal-Washington Tunnel-North Station-South Station. Even after this wreck it was not uncommon for Tower D, at the South End junction, to route trains from Forest Hills/Dudley via Harrison Avenue as a shortcut to South Station and the waterfront.

Thank you for the information

Thank you for the information

Wasn't there also some significant elevated wreck on the curve in front of the old Boston Garden? ...or was that on the surface dead-end track there?

A Lechmere bound train headed by Boeing LRV 3509 entered the curve too fast and derailed, slamming into the remaining portion of the connecting platform to the old elevated Orange Line. One passenger, who was standing in the front stairwell of the lead car, suffered serious injuries. Several other passengers suffered minor injuries. 3509 was never rebuilt, but the car sat under a tarp at the Riverside car house for several years afterward, and was used as a parts source for other Boeing LRVs.

I think that curve or the

I think that curve or the building under it was the subject of one of the "identify the photo" posts some time back.

Body found in Emerson building
All that frigid air means the Sumner Tunnel will be open this weekend
Not a good day for downtown tunnel entrances
Four charged with slicing, tasing, beating man on the Red Line in robbery attempt; one also charged for crowbar beatings, robberies on the Green Line
Man winds up under Red Line train at Park Street
Sunday sunrise