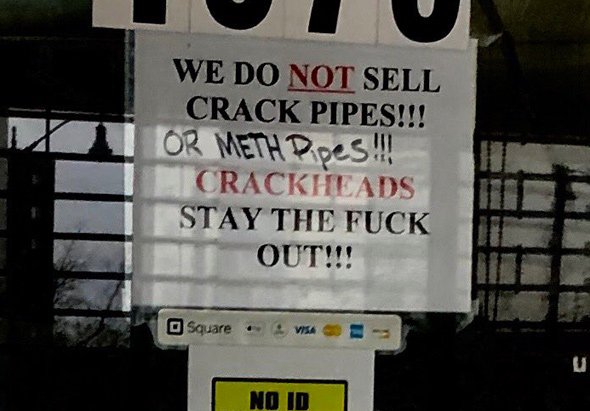 Grace Hailer forwards this photo of the sign on the door of V & K Smoke Shop on Hancock Street in Quincy.

Curious - is meth becoming that much of a problem in the area? Never heard that much about it around here.

methamphetamine is back big

methamphetamine is back big time. Dealers are mixing it with heroin/fentanyl and users aren’t aware of it.

It makes a good upper to balance the downer of opioids.

For values of 'good'

For values of 'good' that are pretty bad.

Meth has made its way to Boston Ma

Yes meth has made its way to Boston as well as Quincy. Im a recovering addict and meth was one of my drugs of choise...more then heroin. It was easily found than any other drug out there. The meth back in 2017 put me into a 2 week coma and i had a 30% chance of living. Doctors didnt know what was wrong with me. My lungs has collapsed, i had septic pneumonia and merca in both of my lungs. I don't recall going into the hospital but my body fought hard. Like i said doctors said i had a 30% chance of survival and told my mother my chances of living were very slim. But by the grace of god after 2 weeks of being in the coma i finally woke not remembering anything or how i had gotten there. I spent 2 months in the ICU and then on to a rehabilitation to have antibiotics given to me through a pic line for a month. It was no joke. Id like to say i stayed sober after that but the drug meth is so powerful my life wasnt worth it. The drug and high was much more important. In April of 2018 I was pushed by family to go into treatment a 30 day live in facility. I chose to go to avoid my family going to court to have me committed. On April 10, 2018 I checked into that program not cause i wanted to just to get my family off my back. They were scared for me. I had lost 45 lbs from the coma and continued using after the hospital stay. The program i went to i didnt want to stay the mental effect on my head was something i couldnt even describe today. I tried leaving treatment many times. But the program i was lucky enough to get into wouldn't let me leave so easily. One day it clicked. I can't say what it was. My higher power or just my peers influence to stay. Im happy to tell you that I have been free of meth since April 10, 2018. I haven't had the desire to pick up or use. Even on my worst day. Something clicked in my head. I had a purpose on this earth. I was given a second chance at life. I have a purpose, im meant to do good things on this earth. Im not sure what it is yet. But i stay sober a day at a time. The obsession to use meth has freed from me. By the grace of god i will have a year sober from meth on April 10 of this year. A day at a time. I wouldnt wish what i went through on anybody. I used to think why did i have to wake up from the coma. I hated life. But today i embrace my sobriety. Im now a mother, daughter and a sister. My life is a lot happier than any day using. Even the not so perfect days. I have been tested many times seeing people i know and they are all addicted to the meth. It used to be heroin was the problem...it was for me for Years. But the problem now is the meth. Its taken over the east coast. And nobody knows how bad it really is.

No stores outwardly sell crack pipes but many do sell "Rose in a Glass" which are the same thing. Except not this store, apparently. Here's a good article [forbes].

Thanks for teaching me something new today!

Too bad you guys are located

Not appropriate for a business to post that or public consumption.

Maybe they were. Swirls, you're being rude for no good reason

It's a legit opinion - one I kind of share (I mean, it's up to the biz proprietor of course, but I do think that language does makes them seem low-brow and thoughtless towards their neighbors).

Just make the sign stern and absolute. No need to be profane.

stand at the door and threaten customers with her bike lock

I prefer to rev my engine loudly in order to threaten them with my highly lethal weapon and yell empty threats from within my protective cocoon to preserve my manhood.

someone woke up on the wrong

someone woke up on the wrong side of the bed today, I see.

Enough with the snark, it's oh so tiring.

If you have never dealt with

If you have never dealt with a crack head (or meth head) it's pretty appropriate. You have to be incredibly firm/blunt/profane with them...and even that usually will not stop them!

There isn't any way to have a large homeless and drug treatment facility located right next to Quincy.

According to their fb page they have everything else. If they going to advertise like they do about having vapes& bongs then why are they all p'd off. Drugs are drugs period..everyone starts off with Marijuana& some go to crack& meth. It's all no good, all drugs, all addictive!

People who are intoxicated on

People who are intoxicated on Meth are very difficult relationally. Individuals can stay paranoid and have psychotic experiences for 4 days on a dot. Fentanyl can be in ANY illicit drug, no such thing as a good supply. See this is why we can't have a nice things like an old fashioned head shop in MA.anymore, it's all disposable needles, narcan and rat poison now, the romance is dead. V&K look like Hippies who are excited that cannabis gummy bears will be legal some day.

Such generalization is inaccurate and unhelpful

Marijuana is legal here (and in an increasing number of other places) in large part because it is not like heroin, meth, crack, et al.

As to the "everyone starts with mj" claim, it's been well established by decades of research that tobacco and alcohol are far more common first-use drugs than marijuana. Additionally, there is practically no statistical evidence to support the claim that marijuana-users are more likely than non-users to take other, more dangerous, drugs. In short, the idea of marijuana as a gateway drug has been debunked, and is no longer claimed even by anti-drug groups like D.A.R.E.

If you're concerned with the problem of addiction in our society (a perfectly legitimate concern), then the chemicals/drugs you should be most worried about are ethanol and nicotine. They are far more addictive, both physically and psychologically - and the number of deaths from their use is many orders of magnitude higher than the nastiest opioid.

(There are, btw, exactly zero confirmed deaths due directly to overdose, or even long-term use, of cannabinoids.)

Agreed, mostly - except that

Agreed, mostly - except that nobody dies of cigarette overdoses.

You are correct that tobacco kills many more than does opiates, but overdoses and the other odious constellation of health and welfare problems associated with "hard drugs" are a public health problem all their own.

Can nicotine, on its own through vaping, harm you? I don't see how it's any different from caffeine.

Nicotine has much more pronounced effects on the cardiovascular system than caffeine. Anecdotally, I have teased some friends in recovery about their ciggy habits being "next" and have been told that it is a harder addiction to shake than others.

Very little worthy research has tied caffeine to anything other than mild dependence. The Straight Edge equivalent of Vegan whackjobs have tried very very hard to find something that caffeine must be doing and have usually found the opposite, at least for coffee (sweetened drinks in laboratory rat quantities have an obvious downside ... but it isn't the caffeine).

The bottom line on coffee

Coffee is one of the most studied "foods". Almost without exception, every study I have ever seen about the safety of coffee is either null (it had no effect on health) or is somewhat protective (reduces your risk of disease.)

This sub thread has served its purpose.
Sub thread Locked/

Cigarettes are a gateway drug

Cigarettes are a gateway drug. Fact. The one kid smoking out of a group is statistically proved better chance of becoming alcoholic or addict! !!

in the DARE-mobile. Thanks for stopping by with your propaganda from the 1980s, you've been a huge help.

Maureen, do you drink alcohol?

everyone starts off with

everyone starts off with Marijuana

I thought everyone started off with beer. Or soda. Or milk.

Put all the metro Boston homeless, druggies, alchies in Quincy. Out of sight, out of mind for the world class city it borders. I say, once again, open a state of the art facility in, say, Cambridge, Somerville, hell Brookline (yes, there's room if you try hard enough). Better still, Newton; the D line and commuter rail is a big plus. Perhaps Newton's new oppressed and under-priviledged citizens could be given free T passes? Heck, VFW Parkway, the old school complex, perfect spot! They can be whisked back and forth on the parkway or use the Charles River bus or commuter rail!

Quincy, you try so hard and you fail even harder

Quincy spent millions of dollars (I know not all the money came from Quincy but you get the idea) building Quincy Commons which was supposed to be the crown jewel of the new Quincy Center. They even spent years to reroute traffic on Hancock Street to build space for the park.

It has turned out to be a lovely place for addicts to hang out during the day when the shelters are closed. It's conveniently located near the Red Line and Father Bill's. Now the city has a place where crack, meth, and opioid users can come together and enjoy the beauty of the park.

It's a shame that a smoke shop also conveniently located in the area isn't welcoming the new visitors.

For real though, Quincy needs to stop fracking around and make a deal with the City of Boston to get the most out of the rebuilding of the Long Island Bridge. I feel super sad for residents of Quincy who legitimately believe they can block its reconstruction. Mayor Koch needs to stop using taxpayer money on dumbass lawsuits against Boston to try to block the bridge and make a deal with Mayor Walsh.

Well thank goodness they’re taking a stand. But I can still get a fresh opium pipe there, right?

In other Quincy news

MBTA bus driver dies after bus rolls into her in Quincy
Sparks rained down on the tracks at Quincy Adams this morning
After the downpour, a nice sunset
State Police: Trooper uses kayak to rescue woman drowning off Wollaston Beach after she walked into the water naked
The Neponset bridge in Quincy wasn't high on our list of storrowing possibilities
Charlie on the MBTA: Governor rides Red Line from Park to Wollaston