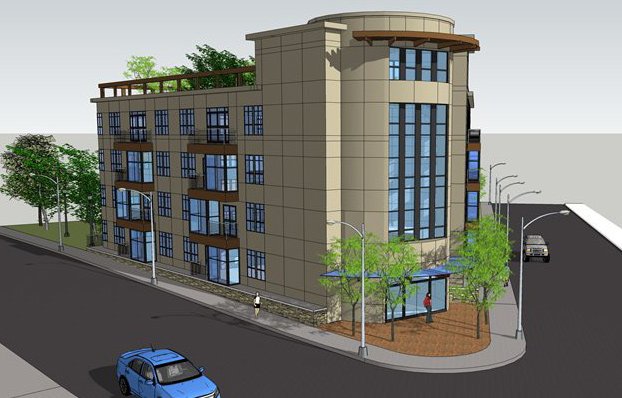 The Zoning Board of Appeal yesterday gave the owner of the derelict gas station on Belgrade Avenue at West Roxbury Parkway until February to actually begin razing the building and putting up the 18-unit apartment building approved by the BPDA and the zoning board in 2016.

John Douros's zoning approval - which, this being West Roxbury also includes 33 parking spaces - expired in February. At a hearing yesterday, his attorney, John Pulgini, said Douros had been delayed by a variety of reasons, including a lawsuit, complications from a high water table, the fact that DCR, which owns an adjoining green space on the parkway, never got back to him with its required approval, and the need to work with Boston to ensure that a planned crosswalk did not mean the elimination of an on-street space used by a disabled veteran across from the project.

"It was like a game of Asteroids," Pulgini said.

Acting board Chairman Mark Erlich said that was all well and good, but that didn't explain why Pulgini didn't come in before the board's 2016 approval expired in February. Although the board routinely grants extensions, it has long taken a dim view of applicants who file for one after their initial approvals expire - an issue that has taken on some added urgency because of its role in the zoning bribery case.

Pulgini apologized and the board granted an extension until February.

What's with the huge foyer? Anyways, it will be good to see this built and also that the hole across the street from Stash's is being worked on actively again.

It reminds me of an old bank on a corner..

Let me see 18 units, what is going across from Stash's? How many units ( where the old
Reardon electric store). No traffic at all

So move to Florida

You will not be missed. I'd rather have more residents, more affordable housing, a more vibrant retail/restaurant sector supported by the additional residents.

Isn't going to be built. The community vehemently doesn't want it.

You could stop driving

That would reduce traffic.

Reminds me of a medical

Reminds me of a medical office building you might see in the suburbs.

He's had 3 years, let's see if something actually happens by February. At least this one isn't a huge hole in the ground like on McGraw. Those were supposed to open in June of 2019.

I always wonder what the pols think about the wasteland that is Belgrade while they walk the parade every year and see the same buildings are empty or falling down.

McGraw is in process

There were workers in there today working on the foundation. Looks like that will be poured within a week or two.

Yes it is, which is great.

Yes it is, which is great. But again, the city did allow the builders to let it sit there for a year with zero being done. Hopefully they got sick of me mocking their "Completed June 2019" sign :)

"This being West Roxbury"...evil car owners.

"-which, this being West Roxbury also includes 33 parking spaces"...

Explain to me what is wrong with parking spaces. Is west roxbury the only neighborhood where people drive?

Cant get through a week without some sort of slight at drivers on here.

Take shots at evil drivers, but then post countless stories of the MBTA breaking down at the same time. Classic, what should residents of Boston do for transport?

Breathe into this bag for a minute and calm down first

The reason I mentioned West Roxbury is because pretty much everywhere else in the city, developers these days are routinely allowed to put up multi-family buildings with fewer than 1 parking space per unit.

Only in West Roxbury are developers still allowed, pressured even, to put in more parking than that. There may be legitimate reasons for this (West Roxbury is not exactly high on the public-transit charts, even if it does have three commuter-rail stations), but I was just noting a fact of development in Boston.

Just to be clear

As far as I can tell (and correct me if I'm wrong), the attorney representing the project to the Zoning Board of Appeal is the brother of the former chairwoman of the Boston Licensing Commission, Christine Puglini. Any other family connections in the Boston-approval-process world that we should learn about?

But as you note, she's no longer in charge of licensing. As you don't note, it wouldn't have mattered, because her role only involved food, liquor and entertainment licenses, not variances for residential buildings.

Where there might have been a potential conflict is for potential restaurants that needed approval of both the zoning board (ones that would offer takeout) and the licensing board. I can't say for 100% certain, since I wasn't going to 100% of all licensing board hearings, but I can't recall brother ever representing a take-out place before the licensing board - he tends to focus on places that need variances (like all new buildings) rather than just simple conditional permits like take-out.

So, having housing and retail on Belgrade Ave is actually a pretty great idea. I honestly look forward to seeing that part of Belgrade become more vibrant and more like it was when I was a kid.

Here’s what I don’t get, since someone mentioned Roxbury Prep: why on earth do people want a private, for-profit, Betsy DeVos-sanctioned charter school in the section where there’s a one-track commuter rail and not a whole hell of a lot of space to drop off 800/1200/1600/400/500/600 kids? Is the idea to turn Roxbury Prep into a place where white kids go instead (stick that in your face, NIMBYS, or didn’t you think of *that* plot twist)? There’s been about fifty numbers tossed out for possible attendance from what I gather. It sounds like they want to build a shitty, inadequate school for current students. If anything is racist, it’s putting kids in a substandard environment for learning because of what, exactly? What does this new building that’s smaller and more of a pain in the ass for everyone to get to prove? That privatization really is the best way to deal with the underfunding and neglect of public schools? What’s awesome about that space for a charter school that isn’t awesome for, oh, a public school? I don’t understand why it’s “racist” to be against the private school when, frankly, I think it’s racist to provide a false front of a “quality” school for Boston kids that also undermines the needs of our public schools. Kids manage to make it out of Boston public schools just fine with parental and peer support. They still go to college. They get jobs. Throwing the term “racist” around sounds more like an act of white guilt. Not agreeing to this school in the neighborhood isn’t about systematic oppression or saying that you are less-than because of your skin color. It’s saying “this is a shitty location and a bad plan for a decent high school AND YOU DESERVE BETTER THAN WHAT THESE PROFITEERS WANT FOR YOU AND YOUR EDUCATION.” At least that’s what I say. Others may say different. There may be people who really don’t want POC at the corner of Bradwood and Belgrade (except that’s already been the case for decades: Roslindale is pretty integrated). I am sorry those people are hateful. They may very well see it the way I do, which is the blatant explotation and manipulation of students and parents by a corporate entity that gives zero fucks about them but seems to enjoy learning about late-stage capitalism.

I don't really care if it goes in Roslindale, but their has to be a better location, it is the worst location possible. what about down by Forest Hills near Gourmet Caterers a lot of that land is vacant or maybe not with all development