New Mass. General buildings would be designed to survive battering from a superstorm - or terrorists 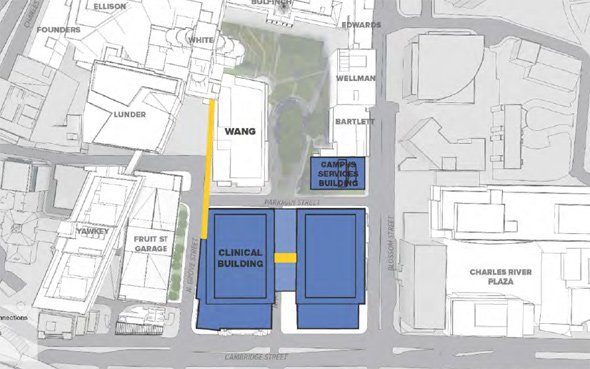 Where the new buildings would go.

Massachusetts General Hospital this week filed its plans for a $1-billion project that would not only provide "21st century care in a 21st century environment" but create "a place of refuge" where hospital staffers and patients could shelter for up to four days in the face of the worst nature - or man - could throw at Boston.

In the plans, filed with the BPDA, New England's oldest and largest hospital details its plans to build a two-tower, 13-story building along Cambridge Street, with 456 new beds, all in single-occupancy rooms, which the hospital said would let it cater to patient demand, increase patient privacy, stay current with rivals and even reduce the chances of communicable diseases spreading. The hospital would decommission older beds in two-patient rooms elsewhere, for a net gain of about 203 new beds. The new building would also include new, more efficient surgical units and underground parking spaces.

A second, seven-story building would go up to house central hospital mechanical and support services and could become home to an electrical generator. The new buildings would require razing several existing buildings; their programs would be relocated to other buildings on the MGH campus.

The new clinical towers would be connected to the rest of the MGH campus by a two-level pedestrian bridge - which would be key to the hospital's plans to turn them into a redoubt in advance of or during an emergency, such as a battering storm, devastating flooding or a massive attack on the campus.

The connection will also support MGH's resiliency planning by allowing for elevated movement of any patient or material to the modern place of refuge that will be the new Clinical Building.

The hospital expanded on the theme:

MGH recognizes that it must be able to ensure the safety of its patients, visitors and staff in a disaster, as well as to be able to provide uninterrupted healthcare services to the City as a critical facility within the community. Both Hurricanes Katrina in New Orleans and Sandy in New York have clearly demonstrated the consequences of hospital failures for those communities, and the importance of creating hospitals that can withstand damaging winds, major flooding, seismic activity and other disasters – natural or human-induced. ...

The building will not just adhere to but will exceed the current emergency preparedness requirements set forth by The Joint Commission and the Centers for Medicare and Medicaid Services. ...

Because much of the Main Campus sits on land in the West End that was once water and marsh, this section of the city is vulnerable to flooding and storm surge as sea levels continue to rise. As seen in recent years in the wake of Hurricane Katrina and Hurricane Sandy, the impact of flooding and winds can be devastating for hospitals, and life threatening for patients, families and staff. The approximate flood elevation at the site is 21.0' to 22.0' (Boston City Base). Based upon up-to-date climate change projections provided to MGH by climate experts at Woods Hole Oceanographic Institution and also external engineering experts who have evaluated flooding risks of the Main Campus in the setting of climate change, the Clinical Building and Campus Services Building will be designed to withstand up to six feet of flooding; this will allow the Clinical Building to serve as a place of refuge for the campus and the MGH community. The resiliency of the buildings will be designed to allow continuous operability of all critical services during a catastrophic event such as a severe nor'easter, hurricane or flood. In addition, the exterior skin and the windows of the buildings will be designed to withstand hurricane force winds. All building services that are located below the potential flood level will either be floodproofed or be designed to have the ability to recover quickly following a flood event, allowing the building to continue uninterrupted operations.

The Clinical Building will be designed to play a primary role in supporting the resilience of the entire Main Campus in the event of a disaster. It will do this not just by physically protecting patients and staff who are located within the building, but also by supporting other functions across the Main Campus and sustaining patient care. The building's utilities and other support services have been envisioned to support not just the building itself during a disaster, but also to be able to take on additional loads and services to help support other areas of the Main Campus. The basement levels of the building may serve as safe areas to store surgical, medical and other supplies for the whole Main Campus pre-event, giving the hospital a safety margin if supply lines to the hospital are interrupted by the disaster. Because the building will connect to the existing inpatient campus by both tunnel and above grade connections, patients in older, less-hardened buildings are expected to be able to be safely and quickly relocated from other campus locations to the new building in anticipation of, or in response to, a disaster or emergency event. This will allow for accommodation of a surge of inpatients in a disaster and/or movement of inpatients out of more vulnerable areas in the hospital in extreme circumstances and prevent the need for evacuation of the hospital.

Patients from vulnerable buildings can be relocated and refuge provided for staff. It is anticipated that people will be able to shelter in place for 96 hours. The new facility will be designed to allow continuous operability of all critical services during an event (and a phased emergency response plan for recovery of other services after an event).

With more resilient buildings, utility services, and care spaces, the proposed building will assist MGH in its mission to remain independent of the need for external disaster response assets and remain open and able to serve the community, even in the worst disasters.

The hospital said all this would tie into its existing disaster efforts, which include a division within its Emergency Medicine department devoted to "disaster medicine," annual reviews of its plans to handle various disasters - from high winds to cyberattacks - and creation of specialized teams that could handle such things as mass decontamination in the event of an explosion or chemical attack or a sudden influx of patients with Ebola or other deadly communicable diseases.

The hospital said it has also taken steps to fortify its existing buildings and systems. Among these steps: Moving critical electrical systems out of basements in case of flooding, creating a new oxygen network and installing new "oxygen manifold systems" to continue supplying the vital gas to patients and operating rooms should part of the system go down and putting special coatings on windows and doors facing outward to minimize potential damage and injuries from shrapnel in an explosion.

Not that I saw

The filing talks a lot about existing transit in the area - for example, "The Clinical Building site is located within a short walk (0.1miles) of Charles/MGH Station on the Red Line and is an approximately 0.3 mile walk from the Bowdoin Station on the Blue Line" - and the hospital's efforts to convince employees not to drive to work, but doesn't say anything about a Red/Blue connector.

MGH Underground Network. Red-Blue is a no go

MGH has an extensive underground network. This new MGH extension will have a massive underground component. Transit advocates always fail to realize that beneath Boston's streets there are layers of public & private infra; not virgin soil. In addition, most private systems are not on public maps. Instead of listening to the Ari Ofsevit / Sandy Johnston / Alon Levy blogger crowd, listen to engineers / managers / planners with 40+ years of built experience. They may be wet blankets but they know what they're talking about.

No one is suggesting putting the Blue Line under MGH, moron, but rather under the street next to it. Sure, there are certainly utilities under the street, but the line isn't going through anyone's basements.

Also, if you're going to use ad hominem attacks like this, maybe come out from behind being an anon.

Bldgs extend above streets & under streets

I work in one that does both. Its common with hospitals, schools, courthouses, city halls, stadiums, theme parks, office parks. Everyone makes mistakes. No need to call commenters morons.

bloohoo we can't disrupt private multibillion dollar organizations who are already doing a ton of construction work to make more money off a broken and exploitative system that literally kills people in order to improve transit for the general public and the poor :,(

The Original MGH had docks for receiving patients.

I personally hate that buildings are constantly being built now over public ways and sidewalks - see millennium hotel, liberty mutual, etc. what happened to setbacks rather than BRA giving away the Bits of sky above us.
Seems like a really hard PR push to say those connections takin public realm are needed, rather than building differently on land MGH already owns. And all these changes are just another way for MGH to drive prices higher.

Common ! -- MGH Way is no more a public way than Yawkey Way

that's a BANANA [Build Absolutely Nothing Anywhere Near Anything] response

In other West End news