It's time to Stop & Get Your Groceries from a Dronemobile 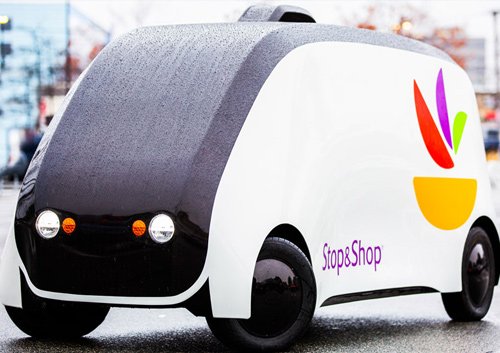 Robomart, a San Francisco company, says Stop & Shop will roll out its robogrocery vehicles in the Boston area later this year.

The idea is you call up your app (of course), request food on demand and then in a little while this robot micro-mart about the size of a Kia Soul pulls up, you unlock it with your app, decide what you want from a selection that is as wide as what you could stuff in a Kia Soul, pay, then the thing scuttles away to await the next customer.

The things are not quite the vaunted/dreaded autonomous self-driving cars we keep getting promised/threatened with - each vehicle would be piloted, drone-like, by somebody sitting in a control center somewhere.

But as the Globe reports, Boston and state officials say the things need to be approved by the city and state after at least some modicum of testing, and, well, these vehicles have yet to actually be tested on any actual roads anywhere, but the company says that's fine because they will have drivers - just drivers who could be tens, hundreds, thousands of miles away.

Unless the absentee driver has some kind of VR rig to give them full, 360 degree vision at once, allowing them to use peripheral vision and spatial sensing you just don't get from a camera... Nope. Also it would need to park somewhere to make deliveries and there are no legal parking spaces available in most of the city, so Nope. Also in the event of a collision said driver needs to be present to be arrested.... so it would need some kind of teleporter to put the driver instantly at the scene. So ... Nope.

About arrests and tickets

The Globe gets into that a bit - if an officer determines little Robby the Robot is to blame for a crash, or even just caught speeding (they supposedly can't go more than 25 m.p.h., but we have some zones with speeds less than that), how does he issue a citation or make an arrest?

There needs to be a feedback mechanism

Whereby the remote driver is threatened with violent death if he or she becomes careless. I favor a 2-ton anvil suspended over said remote driver's head. Although perhaps a SUV would be more appropriate.

Also it would need to park somewhere to make deliveries and there are no legal parking spaces available in most of the city, so Nope

Nope to your nope. This is going to happen and happen soon.

My creds: delivering 50,000 pizzas (coast-to-coast markets over 30 years) and three years of Uber

My prediction: Capitalism will find a way

I just started yet another gig in suburbia with pizza delivery. I swear to God: 1800+ deliveries before the computer nav screwed up... Westminister instead of Westminster. A damn monkey could do my job so well.... luckily I am one charming mofo and that does count for something when all is said and done. "Honey, he is charming, give him some extra money". I am a veritable shoeshine boy in the Jetson age flashing a human smile so convincing and rare, squarely in the face of drones and automatons waiting to take my place.

Once again.. 1800+ deliveries before the computer nav screwed up. Both Google and Waze.

I have been saying this for two years at least. Uber could care less if it loses a billion dollars a year, what the are investing that “lost” billion in is data. They know who goes where, at what time and at what price they’re willing to pay. For deploying autonomous vehicles, that info is invaluable. It’s not happening tomorrow for sure, but every Uber and Lyft drver is currently helping gather the data that will eventually put themselves out of a job.

The who goes where and what they will pay is just one dataset.

The Uber system monitors a lot more than that. I once received an admonishing in-house text that I stopped short 5 times and accelerated too fast 7 times in one trip (I did, with the blessing of the cute ladies who needed to make a ferry). The legalese in our contracts technically allows Uber to breach voice communications within our car too.

Double Parking Is Not Legal

I mean, we all order pizza and we know, in the city unlike Cape Cod, that the delivery driver is going to stop illegally to go to your door with the pizza. It's not ideal but at least they only stop for a minute and can run back to car if it is causing a huge commotion. But really they should not be double parking at all.

But for a drone vehicle to double park thusly, blocking all other traffic, and not just for a minute but a long time while some lazy person mills about it trying to decide what they want to eat... that's not going to be acceptable.

This whole thing is almost as stupid and impractical an idea as Elon Musk's hyperdump.

This whole thing is almost as stupid and impractical an idea as Elon Musk's hyperdump.

Double parking is not the only game in town.

I have learned a lot about those public alleys that dot the map from the Public Gardens to Kenmore. The main thing I have learned is that I could almost AirBNB the available parking spaces in many of them to MicroBus campers without the owners of the space being none the wiser.

One space will serve 9 blocks of shoppers.

Wow, there's absolutely NOTHING creepy looking about that.

This idea seems fantastic
Helps with routine tactics
No need to walk the isle
and Drive for a mile
Do I still get paper or plastic?

But there's just one problem.

You're still getting your groceries from Stop 'N' Shop.

Wow, amazing. They built a

I assume the cost advantage is that the "driver" is in Elsewhereistan making seven cents a day. Like their proposed cleanup-on-aisle-ten robot, Stop & Shop seems determinted to get down to a single employee per store.,

The South Bay Stop and Shop

Typically has 1-2 employees on duty anyway. I've basically stopped going there after having to wait 30+ minutes in line for the one cashier.

And yeah I know, first-world problems, but since I can take my first-world ass to another store where this isn't an issue, I do.

Can this device make me a glass of a liquid which is not quite, but almost the opposite of tea?

and how many vehicles will one "driver" be responsible for?

...that for the cost of one of those things you could probably hire two or three more cashiers for each store area it covers.

and seeing this thing coming towards you.