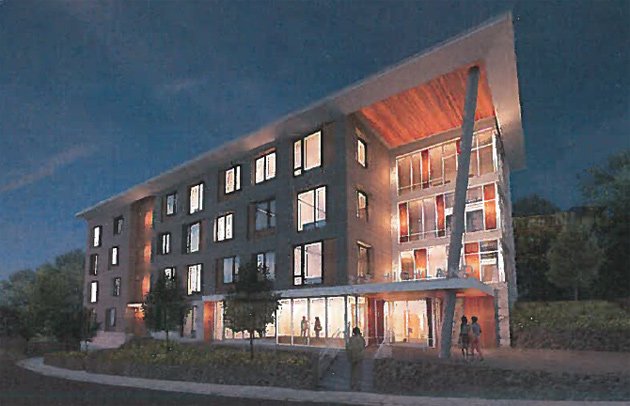 The Zoning Board of Appeal today approved plans for a proposed 23-unit, four-story co-op building on Highland Street between Centre and Marcella streets that would have 15 affordable units and would be designed to generate more energy than it uses.

Under Rees-Larkin Development's proposal, three of the units would be reserved for people making no more than 30% of the Boston area median income, seven at 60% and five at 100%. The remaining eight units would be sold at market rates.

The building will sit on what are now seven individual vacant lots owned by the city.

The building will have 19 parking spaces and a 900-square-foot space for art displays.

Unlike condos, which are sold like individual houses with deeds, co-op units come with shares in a limited-equity company that owns the entire building.

The proposal needed board approval because it is larger and taller than the street's zoning would normally allow. The developer's attorney, Nick Zozula, said the project warranted variances in part because of the extra affordable housing provided, in part because of the challenges of the site's topography - which rises roughly 15 feet from the street to the rear.

Board Chairwoman Christine Araujo voted for the project, but asked the BPDA to pay particular attention to architectural details that would better help the building better reflect "some of the character of that historic district."

The BPDA approved the project last month. The mayor's office and the office of City Councilor Kim Janey supported the proposal.

Parking is the problem

The building may be efficient, but the provision of so much parking is counterproductive to the stated sustainability goals. There's plenty of evidence this is way too much parking for this location and type of building, which is likely to attract car-owning households who will cause even more traffic and pollution in the neighborhood. Seems designed specifically to appease existing residents who don't want more competition for on-street spaces, not to achieve any environmental goals.

With 15 units being affordable, I'd imagine that a number of these residents may not have the luxury of cherry picking to live near where they work or may not be working somewhere easily T accessible. A car may be needed (if not now, then maybe in the future). At <1 spot/unit, I don't think it's quite unreasonable. Also, cars in a garage = cars off street parking. I think the energy efficiency is a plus, not the only objective.

Provide plug ins for electric cars and that gives an incentive to choose climate friendly transport with off street parking.

Oh yes, cheapest EV is around 38 grand. Let's all get a couple!

Will be going doing steadily over the lifespan of this building which will be measured in decades (hopefully). Building for only the needs of right now is a terrible concept.

And even right now

you can get a used electric Chevy for way under $38k. No reason you have to buy one new! (and its way better for the environment - and your wallet - if you go used).

Plenty of used EVs are available under $10K, and will likely last far longer than internal combustion engines.

The problem with that argument is twofold

First, an MAPC study found that parking demand in buildings comprised of over 50% affordable, deed-restricted units (like this one) was much lower than 1 car per unit. In fact, in such affordable developments, off-street parking utilization was only about 55% of the available parking supply, suggesting that parking was vastly overbuilt. This makes sense given that low-income households more likely to live in these deed-restricted units are less likely to own cars.

Second, this project site is just a few hundred feet from the Orange Line. This is textbook TOD. Given its high affordability component and transit location, this project shouldn't even have .5 parking spaces per unit, let alone the ratio it does have. In fact, it probably would have been a great candidate for zero parking spaces. Probably could have added another unit by taking away all the parking.

Yes, let's not have any parking

so in the winter when it snows, we can see more parking wars stories. Love those!

Completely agree that this is

Completely agree that this is more parking than this building needs. It's so close to public transit! Why incentivize car ownership by providing so much parking?

Much nicer than many of the cookie cutter boxes. It's energy efficient, has a lot of affordable units, and has less than one parking spot per unit. Build it!

The Highland Tap will be next

The Highland Tap will be next to go.

to generate more energy than you consume. If somebody invented this they'd win the Noble prize. Developers have to stop the BS.

Then how do power plants work, again?

It is entirely possible - my solar panel production was higher than the amount of electricity that my family used in April, May, June, and September.

My company has been building

My company has been building housing that generates more power than it uses for ten years In the Boston area. Entirely feasible and economical, just takes a little more planning than a typical home

anybody is claiming to have literally defied the Law of Conservation of Energy, but a structure can certainly be built to capture enough energy such that its own resources are used more than exogenous power grids.

In a closed system

the 3 Laws of Thermodynamics -- put in Baseball Terms to honor the World Champion Washington Nationals:

Thus it is certainly possible to generate more energy than you consume during a period of time when the output of the Solar Array is at its maximum [e.g. around local noon mid summer]. Of course there are plenty of times when you might generate 0 energy with your solar array [e.g. from sunset to sunrise in January] and yet be a heavy consumer of energy from the grid [along with everyone else].

And that latter caveat is why these kinds of structures -- lacking local storage -- are not necessarily desirable. They can pump out energy when the grid is probably not needing much [for instance having access to grid-scale solar arrays] and they demand the most when the peak demand for the entire grid [or 2ndary peak] is occurring.

Note -- That this "mismatch" between solar arrays on someone's roof also applies to wind generation, but even more so -- since its difficult to even predict when wind generation will match the overall grid demand.

Now -- when someone comes up with an energy storage system designed for a small to medium sized building which is efficient, reliable, cost effective [on a life-cycle basis] and easy to install -- then we might want to have such Energy - Positive [in an open system way] structures -- But Not NOW

I don't know how often they come up in Boston. I've dealt with them in NYC and all sorts of problems with discrimination/exclusion/etc...
What would the actual benefit be in this situation? In fact, HOW would this situation work - externally setting income limits (for owners) for self-governing, self-interested, virtually licensed to discriminate organization? ...or are Massachusetts co-ops a completely different animal?

Totally agree. It just sounds like a fair housing nightmare waiting to happen.

There’s a handful of co-ops in the city but no one is really used to dealing with them which makes it a questionable investment here.

Court orders new trial for one of two men convicted for the death of Dawnn Jaffier, shot in the head as she waited for a parade to start on Blue Hill Avenue in 2014
Devilish look in Franklin Park
Columbus Avenue in Roxbury getting trolley-like bus stops
Man gets two years for role in Roxbury chapter of Latin Kings gang
Man was hanging out in a Grove Hall parking lot with a gun loaded with 21 rounds, police say
Election roundup: BPS teacher makes bid in Campbell's council district