Downtown residents: Whiter, more educated, less likely to own a car than the rest of the city 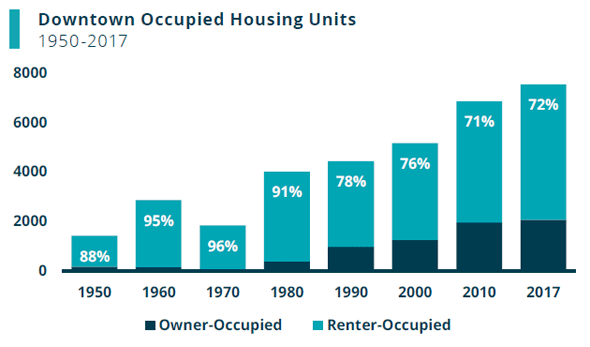 Downtown's population increased 54% between 2010 and 2017 - to 17,581 - according to a profile of the neighborhood released yesterday by the BPDA, which says the number of residents should continue to increase as the more than 2,100 new housing units approved by the city between 2014 and 2018 are completed.

The profile, which covers an area that includes both Downtown Crossing and Chinatown, shows very few blacks and Hispanics among those residents, however: 56% of downtown residents are white and 32% are Asian, with just 3% black and 6% Hispanic. Across all of Boston, whites make up 45% of the population and Asians 9%, compared to 23% for blacks and 19% for Hispanics.

The study does not say whether the Asian population downtown is shrinking as Chinatown is transformed from a place where immigrants could start out into the preserve of luxury high rises, but says the percentage of residents who were born in another country decreased from 38% in 2010 to 32% in 2017.

Downtown residents are less likely than people elsewhere to own a car - just 44% do, compared to 66% in Boston as a whole. But despite the rise of services such Uber and Lyft, the number of car owners downtown decreased only slightly from 2010 - when 45% of downtown residents reported owning at least one car.

Also, only 41% of downtown condos were owner occupied. In total, the area had about 7,600 housing units - 4,400 of them condos, the rest apartments.

Despite the growth in residences, downtown remains a business district as well: The BPDA reported nearly 185,000 jobs downtown in 2015 - a ratio of almost 18 jobs per resident.

I walk through Downtown after work, i feel for anyone living there, it's a cold miserable place.

In the lonely financial zone

In the lonely financial zone
By the sea
I have walked on cold winter nights.
I've stood in awe, so silently
Under the buzzing electric light.

It usually warms up around

It usually warms up around Patriots Day.

Living downtown is awesome. Magical sometimes to walk in the public garden and the common at night. Just feels like you have the whole place to yourself after everyone has gone but uoj can also be in busy people filled spots too if that is your incljnation.

The City should not permit a single new housing unit downtown that includes an accompanying parking spot. Period. If you can afford to live there, you can walk or pay for a garage. Get serious about climate change and congestion.

Kinopio is that you? It's not like the parking associated with these buildings is in some surface lot...whatever parking there is is underground. And if you already live downtown, I doubt the vast majority of these residents are using their car to commute...downtown. So why would you begrudge someone a spot underground to store their car for the occasions they would like to go somewhere out of town?

If you're so concerned about climate change why don't you support not stuffing so many people into so many dense developments into this small city?

You don't understand how buildings work, I take it

In fact, dense buildings stuffed with people in a city are generally more energy efficient and have a much lower carbon footprint than a comparable number of single-family homes spread out in some suburb that forces people to drive everywhere.

And the actual OWNERS

And the actual OWNERS (dark blue) are Delaware corporations or LLC's whose officers have a P. O. Box in New York City or Florida listed on their organizational papers filed with the Secretary of State's Office. I'd like to see the figures in on that data. We just did a bunch of closings for units purchased in the Millennium Tower. I can't even count how many are purchased by foreign investors who just rent them out. Do we have the data in on how many nonwhite people applied to rent a downtown unit with the actual owner's real estate broker? We should make them more available to nonwhite people as well. Maybe nonwhite people are just not applying with real estate brokers to live Downtown. Maybe they are just automatically discouraged because they think they'll be discriminated against. It really isn't right at all.

According to the data given

28% of the occupied units are owned by their occupants. A touch lower than in 2010, but higher than it's ever been.

Brazilians, Chinese, Japanese, Koreans, Qataris, Saudis, and other wealthy foreigners are "white" and not at least mixed?

The problem is that the downtown areas:

The problem is that many of the downtown areas are way, way out of the price range of blacks and other non-whites.

Are some parts of the city, "Blacker"? and would that be the word used to describe it?

Here's a phenomenon. I'm a

Here's a phenomenon. I'm a 21-year old white female who grew up on Mission Hill. We all got all along, hung out together, went to each other's places, white, black, spanish. A lot of us kids hung around with each other, dated each other, etc., went to school together. It was no big deal. We were all friends. In my opinion, there's a lot more discrimination against nonwhites by the white wealthy conservatives AND white wealthy liberal NIMBYS.

The report may not have demographics

But American FactFinder does:
https://factfinder.census.gov/faces/nav/jsf/pages/index.xhtml
The Asian population in 02111 has increased from ~3200 to ~3700.

Just the way the city wants it

Percentages and numbers are separate

Because "Downtown" isn't defined in this report, there isn't a clear-cut answer to your question about changing demographics. Is it what the BPDA considers "Downtown including Chinatown and Leather District" or is it specific census tracts as defined by the US Census Bureau.

But, to answer your question, no, the Asian population downtown is not shrinking as Chinatown is transformed from a place where immigrants could start out into the preserve of luxury high rises. In raw numbers, that demographic is growing, but at a slower pace than the general population in that neighborhood.

All new residential construction has been built around Chinatown, leaving its buildings intact.

To do the research yourselves, go to http://census.gov and also visit the BPDA's Census and Demographics Maps page.

Or, check out my 2000 - 2017 Chinatown Downtown Population Changes spreadsheet.

The bar chart graphic is

The bar chart graphic is confusing. Why don't the percentages seem to match the color of the bars? Does the fat axis count as part of the bar?

Police say teen who set cruiser on fire in the May 31 rampaging was arrested while trying to flee the country
Car flies off I-93 at the Zakim, lands on Leverett ramp, driver survives
New year but same old stuff: Red Line just not up to snuff
BPD clerk charged with overtime abuse, forging supervisor signatures
Citizen request of the day: Leave the Boston Common Christmas lights on
Two sought in connection with stabbing at Downtown Crossing T stop