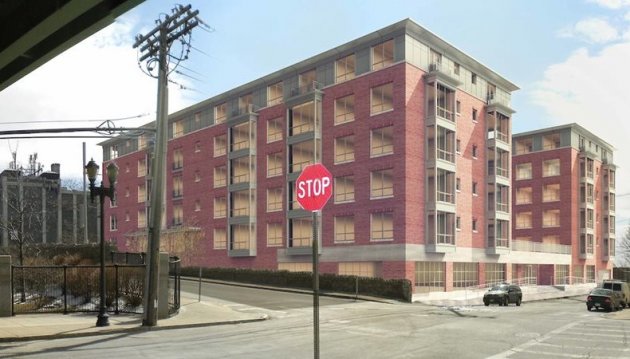 The Zoning Board of Appeal yesterday gave developers who first proposed a 94-unit residential building at 135 Bremen St., in East Boston in 2014 another eight months to begin actual construction or risk having their approval rescinded.

The BPDA approved the project, proposed by Michael Merullo and Joseph Ricupero for the corner of Bremen and Porter streets, in 2014, followed by zoning-board approval in 2015. The BPDA then approved it again in 2017 after the developers proposed changing the building from rental units to condos.

The project's zoning approval expired in June, and at a hearing yesterday, Acting ZBA Chairman Mark Erlich at first seemed reluctant to grant an extension because the board is reluctant to roll over approvals that have already expired - - an issue that has taken on some added urgency because of its role in the zoning bribery case.

But after the developer's attorney, Jeff Drago, said the delays were due to working with the T, board members allowed as how the could see that, but just don't let the next extension expire if another one is needed.

Drago said the delays in starting construction were due specifically to the complexities of building above the Blue Line tunnel that runs under the site. He said the T would not even start talking to him or the developers' engineers until after they had won all the required permits from city agencies, and then work on borings and designs to ensure the building did not affect the tunnel at all took additional time.

They need a better rendering

It seems very unfortunate (or perhaps even intentional?) to have a big stop sign smack dab in the middle of the building -- almost as if the artist were trying to send a message.

Maybe a different kind of message

This stop sign, and the other 3 in this intersection, are arguably the 4 most run-through/blown/ignored/whatever you want to call it stop signs in East Boston. With traffic already going in 5 directions at a 4-way stop, it blows my mind there aren't daily accidents here.

always been a homeowner's dream to own property directly above a subway. I bet these fly off the shelf at "market rate."
No doubt it would have done better as apartments but then the developers couldn't take their money and run.

The bigger mess is right next door - 175 Orleans

It might be best to fold on 135 Bremen until a later date. The developers may ultimately prevail and build here - only for it to sit next to an exposed industrial property / rat den

I think they (developers)

I think they (developers) should squash their plans in building this 90 plus unit condo building instead they should consider leasing out the land to Trader Joe’s , East Boston really needs a Trader Joe’s and this will be the ideal spot!

Porter 156 sits literally across the street from that “rat den” and the units which have come up for sale there haven’t exactly languished on the market.

Proposal for more than 400 units.

I completely forgot about this

So turns out this sob story was total BS and they were just trying to rework the plans for something 4x as large.

Citizen complaint of the day: Yuppie loathing along the East Boston waterfront
The jumboest of the jumbo jets makes unexpected return to Boston
East Boston urban farm to go year-round with greenhouse heated by geothermal
Capt. Kirk beams down to East Boston
Directors of East Boston neighborhood association dissolve group after nobody steps up to help run it
East Boston bakery seeks beer and wine license it wasn't able to get earlier because of citizenship issues