Marshall Hansberry came across this coyote, acting all casual and stuff, by Eastman Court, outside MIT's School of Science today. He reports animal control arrived to assess the situation.

I'd never get this close to a wild injured possible rabid, animal. No matter how cute it looks.

Not sure he's that close

He could've been zooming in (the original looks to be at maximum zoom) - and then I cropped the photo, which maybe makes it seem like he's even closer still.

Not how rabid animals behave

A rabid animal is usually mad with pain and will attack you, not shy away.

Some animals withdraw and hide. Feral cats with rabies usually do this.

That are quite a few bunnies that live in the open green spaces of MIT so it seems like a likely place for a coyote to find a snack.

I figured it was only a

I figured it was only a matter of time until some coyote found out it was an all you can eat bunny buffet on the MIT campus.

CORRECTION: Not ouside "School of Science"

MIT does not have a physical building considered the School of Science. MIT's "schools" are intertwined physically and are more administrative centers than separate entities. Eastman Court is between Building 6 (part of the main building that surrounds the great court) and Building 18.

Yes, Eastman Court Is Outside The School Of Science

You're correct in that many separate departments and laboratories at MIT are structured within the School of Science— the department I work for is, and we're on the other side of campus.

However, the headquarters and Dean's Office for the School of Science is located in Building 6, just off the Eastman Lobby, dedicated to George Eastman and with artwork honoring great scientists. The Eastman Lobby opens onto Eastman Court. 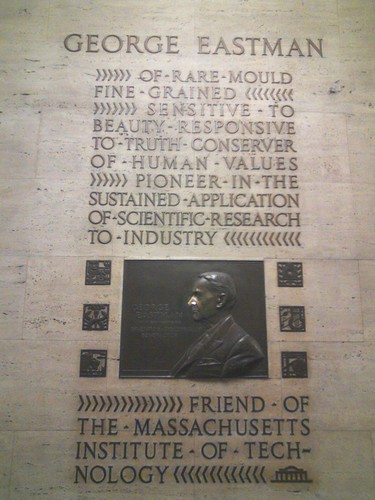 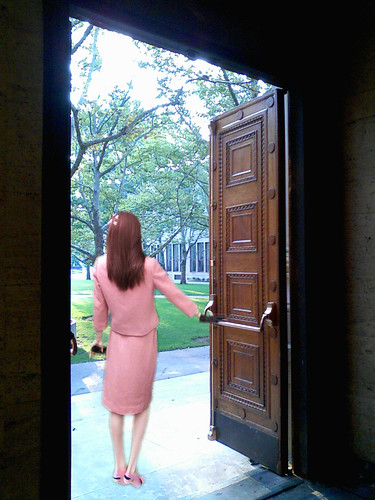 As someone who knows the neighborhood well and has gone to the Dean's office many times, to hear a coyote was seen outside the School of Science, I would immediately associate it with Eastman Court.

As someone who graduated from MIT

I can tell you that students (who don't usually go to the offices of school deans) don't think of the School of Science as a location and if told the coyote was found "outside the School of Science" would likely give you a blank stare and wonder what you're talking about. I never heard anyone refer to any location on campus as being by a particular school, with the exception of Sloan which was the far end of campus when I was there.

That's Why The Students Have Us Administrative Folk To Help Them

I often answer questions that mystify students, such as "what is masking tape?".

But eventually, when they get their PhD, the first time they'll see "Dr." written before their name, will be on the cake I order for their thesis defense celebration.
( the happiest and proudest part of my job! )

Most students aren't getting PhD degrees

Seriously, when's the last time someone told you to meet them "at the School of Science"? No one I know refers to it that way. Unlike at some other universities, MIT undergrads don't think of themselves as belonging to a particular school there. You're admitted to MIT, not to a particular school or department within it. That's one of the nice things about the place.

If I said, meet me outside the School of Architecture, would you know where that is?

How about, the School of Naval Architecture? It's a famous MIT landmark and also a likely meeting place. If you don't know were that is, I'll have a hard time believing you actually attended MIT.

mg may have overstated a bit, and you may have a technical point, but I think you have to concede that there is ≈0% perception among the general MIT population that the SoSci is located or even centered along the Eastman Lobby.

Otoh, the Eastman Lobby itself is widely regarded as a *place* - ie a location of cultural/geolocative significance (eg the SoArch, ML, Green Bldg, Lobby 7, 26-100, etc.).

If the intention of reportage is to share events in a way that illuminates and specifies details in a useful way, then the original reference to the SoSci is awkward at best - but also, admittedly, of minor importance.

Adam is not a former inmate at the institute, so afaiac he gets a pass on stuff like this.

- a member of the MIT community since 1983 (student, alum, liaison)

I think you missed the part where Elmer works there?

Indeed, no one would say

Indeed, no one would say "outside the School of Science" at MIT. But who cares. It's a COYOTE.

If It Was Lowell Court, Outside The Department Of Mathematics...

Out of curiosity, what is a "Persci Mannequin"

The picture of the woman in pink exiting the door seemed weird (photoshopped? the lighting seemed off) so I clicked through and it is labeled "Persci Mannequin exiting Building 6 Lobby" So now I'm curious to know what a Persci Mannequin is?

over this nitpicking about what building it is!! It's a coyote. Nuff said.

Boy, the late General Hooker would be relieved to know there is

another entrance dispute that bumped him from the news.

Very beautiful! hope he is

Very beautiful! hope he is ok

Coyote is healthy and doing fine, so they left him alone.

is that the coyote sat there patiently while they checked its teeth and gums, shone a light in its ears, perhaps took a pulse and listened to its breathing. And then gave it a doggy treat for being such a good patient.

I saw this beautiful animal a little after the picture was taken. Does anyone know what happened to her/him?

what I thought was a Coyote on Putnam Street near the MLK Jr school last week. I wonder if it is one ore multiple.

In case of emergency

He has his own way out:

Well, it stands to reason that anyone

who proclaims themselves to be a Super Genius would want to enroll at MIT.