Trolley takes a detour up Tremont Street in the South End 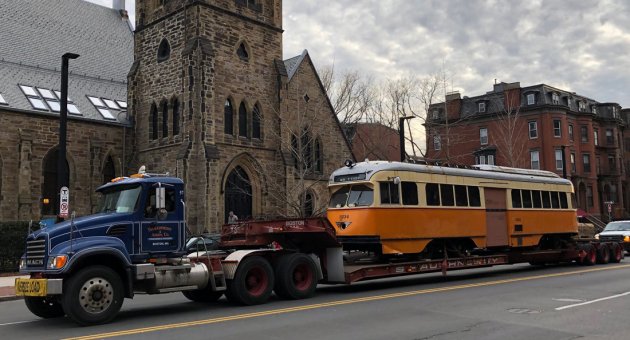 Pat from Boston spotted this Mattapan Line trolley on Tremont Street today. Alas, car 3234 was not stopping for passengers - it was on its way to the T's Everett shops for repairs.

Because the Everett facility is mainly for buses, Mattapan workers first outfitted the trolley with rubber tires.

... but I don't have a photo, unfortunately.

When I was a teenager, and lived near the Central Avenue stop on the Mattapan line, I was hanging out with my buddies on the bridge and we saw a regular Red Line subway car being hauled up Central Avenue. We had recently finished a couple of righteous smokeables, so it was especially stunning to us :-)

It is not one of the two cars

It is not one of the two cars that collided, that was car 3262 hitting 3260 (you can look at the news photos from the time to verify). 3234 is a car that was already out of service "awaiting parts" for the last few years. It will benefit from the parts now available from thw wrecked ones, and it is on its way to Everett Shops for overhaul.

Thanks for the correction

Yes. The T has a contract

Yes. The T has a contract currently out-to-bid for an overhaul program that'll refurbish 8 of the 10 Mattapan PCC's for another decade of reliable service by:

An outside vendor experienced at trolley repair will come in and do the work onsite at Everett Shops with parts ordered by the T. Bids on the contract don't actually close for a few more weeks but with the recent accident gutting the line's car reserves it's put added urgency on a quick start date for the program, so the T wants the winning bidder to get to work ASAP the second the contract is inked. That's why car 3234, which has been out-of-service for almost 5 years, is moving to Everett right now.

Brookville Corp., a well-established U.S.-based builder, has submitted a bid for the contract and is very likely to win because they have superlative track record on this type of restoration job. Brookville rebuilt fleets of vintage PCC's for San Francisco's F-Market Line (32 cars to-date) and Philadelphia's Route 15 line (18 cars, all of them modded with modern ADA-compliant wheelchair lifts). They've also done brand-new modern LRV's for Dallas, Tampa, Seattle, and Detroit and built a fleet of fully modern but historically-accurate replicas for New Orleans' famous streetcars. They're very good on craftsmanship; probably no one on the planet is better-suited to this job on the Mattapan cars than them.

Severely damaged car 3262 from the collision is going to become a parts donor for the rebuild program then scrapped, since it's been deemed wrecked beyond repair. The other damaged car, 3260, will also be mined for parts for the other 8 cars for expediency's sake...but it may be repairable so they aren't yet planning to scrap it. If the rebuild program on the other 8 cars goes well the T will revisit its options for 3260 at the very end and determine if it's worth attempting a repair. If so, they'd appropriate a little more money for parts and tack it onto the very tail end of the contract as the 9th rebuilt car. That's the best-case scenario, but we won't know for a couple more years if it's in the cards because the 8 undamaged cars are the main priority.

Bids for trucks and

Bids for trucks and propulsion systems closed in August, Brookville was only bidder and is waiting for notice to proceed. Brookville is just supplying the parts, MBTA staff at Everett and Mattapan will do the actual instlation and repair work on the cars.

The T can always scrap the line no matter the contract

The community should be ready for a sudden Mattapan trolley termination right around the opening of the Blue Hill Fairmount station, and then a sudden Fairmount Line termination right around the opening of Mattapan's new BRT line (likely the old Mattapan trolley line). The community should be prepped. See if Green or Red Line trains can run under the road overpasses between Ashmont and Lower Mills/Milton. From there, if both Boston and Milton are game, find the impact of bridging or eliminating the Central and Capen road crossings with the hope of extending Red Line service to Mattapan. Every station except Milton and Mattapan would be eliminated, but service would far exceed current conditions and future BRT conditions.

One of the few trolley's

One of the few trolley's actually moving on the T!

Best Sho in Town for kids -

Best Sho in Town for kids - ride in the. Old fashioned trolley then a get off at milton, walk under a bridge through a brick tunnel at the old chocolate factory, cross over a waterfall to Dorchester’s the ice cream smith or pitas pizza, or feed ducks at the milton boat yard.....
It is a fun way to spend a nice day.

I used to actually ride streetcars on Tremont Street in the South End in the late 50s and very early 60s. The line had been shortened from Egelston Sq. Back to Lenox Street not far from Mass. Ave. The line even back then had heavy ridership with Sanders on Saturdays. It ran into the Central Subway with a turn back at the lower level of North station on Canal St.