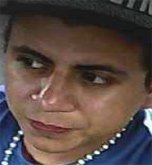 An MS-13 member who emptied his gun into a suspected member of a rival gang member laying on the ground after another MS-13 member tried to eviscerate him with a butcher knife was sentenced today to 20 years in federal prison.

David "Cilindro" Lopez had pleaded guilty in November to his role in the murder attempt and to his return to Massachusetts after he fled to New Jersey to try to kill an MS-13 member suspected of talking to the feds - who upon learning of his impending attack, immediately relocated him under the witness-protection program.

According to a sentencing memorandum filed by the US Attorney's office in the case, the victim of the 2014 attack in Chelsea survived only due to the skill of a trauma surgeon at Mass. General, who resuscitated a man who had no blood left in his body by the time he got to him in the emergency room.

Under the rules of MS-13, it was important to Lopez, a Salvadoran national living in Chelsea, to ensure the victim's death to win a promotion in the gang's Enfermos Criminales Salvatrucha "clique."

In the memorandum, prosecutors say they suspect Lopez has actually killed before, based on some of the things he said in conversations captured by FBI agents whose work led to the indictments of 61 suspected local MS-13 members in 2016:

You just cut the jugular with the knife there, nice and easy, just like with a hen when you search under the feathers so that you feel the pulse, like that, you feel the son of a bitch like that until you feel the vein and that’s where you jab the knife in. And with just a little - a little bit like that, [whistles], it goes in.

Because of his past and statements, prosecutors wrote they were unwilling to give Lopez a "discount" for pleading guilty; they even rejected shaving just five months off his proposed sentence. US District Court Judge F. Dennis Saylor, who has been overseeing the local MS-13 cases, agreed with the recommendation for 20 years.

And friends could be at the boarder crossing now CA.
Its not all women and children as the media would like us to believe.
I think Sessions mentioned this gang more than once when he visited MA and true to form liberals picketed his arrival.

If only proper command of the English language

were a requirement to be a citizen or lawful resident, most winguts who believe fear-mongering rather than facts would be deported.

Nothing says "I have valid and carefully-considered views on human migration and national sovereignty" like not knowing how to spell "border".

Somebody Read that Right Wing Self Help Tome

What flavor is your kool-aid!

Your saints are racist crooks. Meanwhile, the facts are in: sanctuary cities are safer because of what happened to get this guy taken down - people talk to the police.

Did an immigrant dime your kid or something?

And I take it that in your world it would be even more dangerous if we hadn't imported/encouraged/beckoned/allowed these people in to begin with?

Did an immigrant dime your kid or something?

No, one took his JERB!

Look at me, I'm so progressive

I can make fun of people's accents and call it tolerance!

I think he was making a fairly dated and obscure reference to a Homestarrunner cartoon.

Roman's comment still stands, as an accent is getting mocked.

Only a certain dimwit is being mocked.

Jerb is a south park reference. Very easy to look it up.

Now - GIT BACK ON THE PILE!

What linguistic community talks like this? Never encountered it. ;-)

There was an episode of South Park several years back where all the adults in town were complaining that the immigrants (time travelers from the future...) "Took Our JERBS!!!"

how many is that now, they do this city to city, "everything is controlled by the inside". These guys will own the system in 20 years. There on some " American me sh#t !!! No lol

Anybody got some Green Goddess?

I need some dressing for this word salad.

I rest my case.

They definitely control the

They definitely control the illegal fentanyl-opiod drug market in Mass. I used to work with a kid from NH, and he says that these drugs get transported up to Lawrence, and have many customers in NH. NH has a major problem with these drugs.