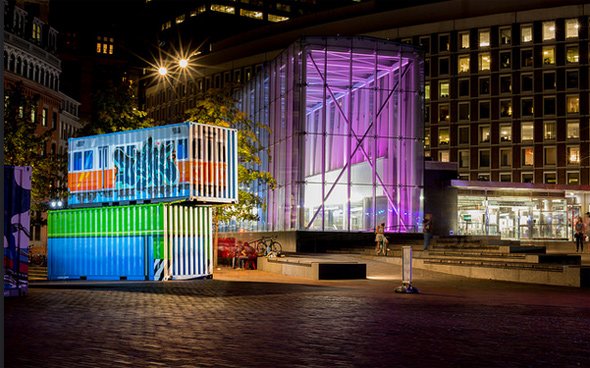 Copyright Redsox223. Posted in the Universal Hub pool on Flickr.

When "The Team" was being put together for #HUBWEEK, https://hubweek.org/about#meet-the-team , it was realized that everyone was white and that the premise that "The notion that collaboration, accessibility and inclusion are table stakes and fundamental ingredients for innovation today" might be a bit hollow but Lauren Jones joined #"TheTEAM", she has worked with Martin, as a twofer as Sister Warren would say and so like #we'regood!. (Can't let @Adrian_Walker think we aren't #diversity, like Susan Collins he falls into line)

Like LPH says on the twitters https://twitter.com/Linda_Pizzuti?ref_src=twsrc%5Egoogle%7Ctwcamp%5Eserp... of the SoulCYCLE team: "Everybody was SoulCycle. It was the voice of the people," says @soulcycle's Co-Founder and @WeWork Partner. Because EVERYBODY needs to be part of paying to bicycle ride indoors for a reasonable fee of $30 per session. They have 4 locations in the Boston area for all the people: Back Bay, Seaport, Beacon Hill and Chestnut Hill. Like, that's where all the people really are!!! LPH further says "#HUBweek has the same ethos. It is of everybody and for everybody." (Adam...I'm sure you'll be first in line when #soulcycle opens in Roslindale...don't hold your breath)

So come on down to City Hall Plaza and see some color, no matter if you live in which of the great diverse and inclusive areas of Boston like Back Bay, Seaport, Beacon Hill and Chestnut Hill that can afford $30 a session to ride a bike. I'm not like saying that if you're not an Everybody you're a #nobody, just #marryup !!!

PS. Speaking of colorful, I heard quite the language the last time that @DAVIDprice24 was pitching at Red Sox Stadium. What is @ac13alex thinking with his game 2 starter? Give me a real man like Dave Stewart or Bob Gibson. 0-10 ???

This "satire" is becoming more and more nonsensical. Is Linda supposed to be writing about herself in the third-person now? Why does UHub have an account that's just dedicated to awkwardly making fun of one specific person?

I just ignore the troll

"Linda" is a crappy writer who is not as funny as they think they are. I just ignore all the posts. It adds nothing to any post they appear on so I don't waste my time reading or responding.

I don't know what SoulCycle is, but while Hubweek is going on, you can get a 30-minute ride on BlueBikes for just $1 by using the promo code BCBSMAHUBWEEK in their app. I think this is good until the festival closes Sunday night.

The Green Line was in terrible shape; riders' mouths must have been agape
Wanted man nabbed on Orange Line after passengers react with alarm to one of his rifle-like paintball guns, police say
Maybe we'll see this correction in the Globe tomorrow
Man beaten to the ground in Boston Common phone robbery; three teens arrested, two more sought, police say
John Wilkes Booth knew Tremont Street well - and so did the man who killed him
Three women charged as aggro Downtown Crossing stompers